The latest CNBC rankings of “America’s Top States for Business” are out, and it appears New England’s grades are being dragged down by crumbling infrastructure.

Massachusetts is ranked among the worst for infrastructure in the nation, at 48th, while Maine is 47th. Rhode Island, the smallest state, is the worst of all 50 states.

The region has consistently ranked poorly in the CNBC infrastructure rankings. The author of the report, Scott Cohn, attributes it partly to natural wear and tear.

“A lot of it has to do with the age of everything that’s there. All that infrastructure has been around a long time,” Cohn said.

Within Massachusetts, 37.5 percent of roads are in unacceptable condition and 9.2 percent of bridges are in poor condition, CNBC said. 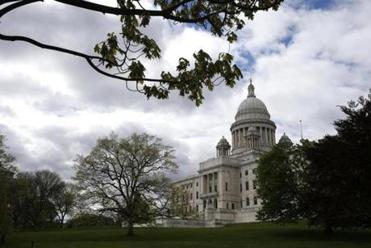 Local politicians defended the state, while conceding that there is room for improvement.

That might have something to do with the fact that drivers in Massachusetts face the fourth-longest commuting times in the nation, at an average work commute of 29.3 minutes, CNBC said.

Massachusetts Department of Transportation spokesman Patrick Marvin said the Baker-Polito administration has been ramping up investments in the transportation system.

Maine ranked fourth-worst for infrastructure, with 13.1 percent of bridges in poor condition and 13 percent of roads in unacceptable condition.

Bill Pulver, chief operating officer of Maine Department of Transportation, said Maine’s road and bridge conditions are better than the report suggests. But he also said the state has “an unmet need in funding.”

“While we do have plenty of miles that we’d like to be in better conditions, we do a pretty good job trying to stretch the dollar and improve as many roads as we can,” Pulver said.

In Rhode Island, which received the worst infrastructure grade in the nation, CNBC said 51 percent of roads were in unacceptable condition and 23.1 percent of bridges were in poor condition.

A spokesman for Rhode Island Department of Transportation did not immediately return a request for comment.

In calculating infrastructure grades, CNBC analyzed government data on, among other things, the conditions of roads, bridges, railways, waterways, airports, and utilities.

Given the state’s strong workforce and highly educated population, Massachusetts tends to place well in the overall rankings — it ranked 14th — but its grades for infrastructure, cost of living, and cost of doing business pull down its overall score.

Maine and Rhode Island ranked 44th and 50th as places to do business, respectively.