By Travis Andersen and Danny McDonald Globe Staff   May 16, 2019

A cafeteria worker at a Canaan, N.H., high school recently lost her job for letting a financially strapped student take food without paying, according to published reports.

The New Hampshire Union Leader identified the worker as Bonnie Kimball, who was fired in March by the vendor Cafe Services from her job at Mascoma Valley Regional High School.

Kimball, the newspaper reported, on March 28 interacted with a boy who was unable to pay for a la carte items on his tray, and she told him to have his mother put money on his account. A Cafe Services representative was observing operations at the time, and Kimball was terminated the next day, the Union Leader reported.

Cafe Services disputed Kimball’s account in a statement to the Globe.

“The information as reported is untrue,” the statement said. “As an organization we are acutely aware of the prevalence of food insecurity and take pride in being able to provide meals for those in need.” 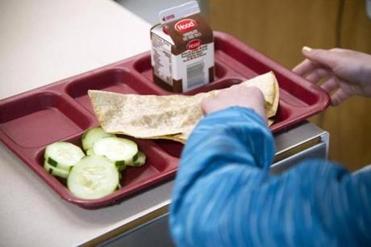 Jeneé Osterheldt: Lunch-shaming is not the lesson we need to teach

No one should go to school and starve. All students, regardless of income, deserve to be fed.

The company said its Fresh Picks Café division “would never authorize an employee to not feed a student or a staff member a meal.”

The company said that while “we are not at liberty to discuss the confidential details regarding an employee’s employment or termination from employment, we can share that the company has policies and procedures in place that are shared with and acknowledged by team members; when established policies and procedures are not followed corrective action is put in place up to and including termination.”

Kimball couldn’t be reached for comment. The school district also provided a statement when asked for comment on the termination.

“The Mascoma Valley Regional School District has contracted with Café Services to run Mascoma’s food service program,” the district said. “The people working in the school lunch program are employees of Café Services, and Café Services is responsible for employment decisions regarding those employees. School district policy is to make healthy nutritious school meals available to every child whether or not the child has sufficient funds to cover the cost of the meal.”

Kimball told the Union Leader that lunchroom staffers know about the students’ individual circumstances and said she was “doing what I was told to do” when she allowed the student to take food.

Kimball on Wednesday posted the Union Leader report on her firing to her personal Facebook page, and supporters wrote comments of encouragement.

“My heart goes out to you,” one person said.

Another Facebook user posted, “Take it all the way Bonnie Kimball, YOU DID THE RIGHT THING, Kindness trumps Company Greed Every time in my head & Heart!!!”