By Maria Cramer and Shelley Murphy Globe Staff  May 13, 2019

As she stood in federal court, Felicity Huffman cried when a judge asked if she was guilty of conspiring with a college counselor to inflate her daughter’s SAT scores.

After her teenage daughter was given extra time to take the SAT in December 2017, Huffman plotted with the counselor, admitted ringleader William Rick Singer, to have her daughter take the entrance exam at a test center in West Hollywood, Calif., where an accomplice corrected her answers after she was done, boosting her score to 1420. 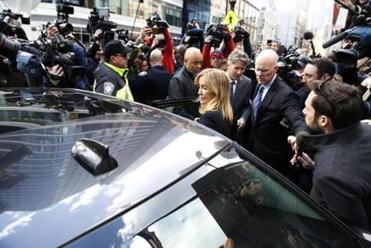 Huffman was charged as part of “Operation Varsity Blues,” which found that wealthy parents had allegedly cut large checks to facilitate their admission into elite colleges and universities.

Huffman softly asked Talwani if she could clarify one thing: Her daughter had been working with a neuropsychologist since she was 8 and began receiving extra time on tests when she was 11 because she needed it, not as part of the scheme.

“I just didn’t want to create the impression that the neuropsychologist had any part in this because, like my daughter, she didn’t have any knowledge of my involvement,” Huffman said, her voice cracking as she began to weep.

She took a breath to compose herself as Talwani looked at her and gently asked if she had anything else to say.

“Everything else that Mr. Rosen said I did, I did,” Huffman said before a hushed courtroom packed with reporters, prosecutors, and curious onlookers.

It was a humbling moment for Huffman, an Academy Award-nominated actress and one of 50 people, including parents, coaches, and test administrators, who have been accused of participating in the bribery scheme. Parents allegedly funneled bribes through Singer that ranged from $15,000 to $1.2 million.

Five have pleaded guilty, and nine more have indicated they will, too.

Huffman, 56, who had previously apologized publicly for her role in the scheme, pleaded guilty to conspiracy to commit mail fraud and honest services mail fraud, as did Devin Sloane, 53, a Los Angeles businessman.

Sloane admitted to paying $250,000 so that his son would be accepted as a water polo player at the University of Southern California. Sloane’s son wore water polo gear Sloane had bought on Amazon for a picture that was doctored to present him as an athletic recruit.

Prosecutors said they will recommend four months of prison time and a $20,000 fine for Huffman and one year in prison for Sloane plus a $75,000 fine.

During Monday’s hearing, the prosecutor explained why Huffman paid significantly less to Singer than most other parents are accused of spending in the scheme. Singer, who is cooperating with the government, contends that Huffman was supposed to pay him $25,000 to boost her daughter’s score, Rosen told the judge.

As part of the plea agreements, Rosen said that prosecutors have agreed not to bring any additional charges, such as money laundering, against Huffman or Sloane. In exchange, they have agreed not to appeal their convictions or their sentences.

The judge asked Huffman and Sloane if they understood that she may impose sentences that are higher or lower than detailed in their plea agreements. Both said they did.

Huffman declined to comment as she left the courthouse with her brother. In April, she issued a statement accepting responsibility for her role in the scheme.

“I want to apologize to the students who work hard every day to get into college, and to their parents who make tremendous sacrifices to support their children and do so honestly,” Huffman said.

“My daughter knew absolutely nothing about my actions, and in my misguided and profoundly wrong way, I have betrayed her.”

Greg Henning, a former Suffolk County prosecutor who works in crisis management, said that Huffman’s public apology and swift decision to plead guilty can only help her appeal for leniency.

“Judges and prosecutors watch TV and read the news,” said Henning, a principal at West Hill Associates. He contrasted Huffman’s apology with the actions of actress Lori Loughlin, who has also been implicated in the scheme and showed up for her court appearance in Boston last month beaming and signing autographs for fans.

Prosecutors want to feel confident that they are not being fooled by a defendant who is acting repentant only to avoid prison time or to restore a reputation, Henning said.

Huffman “shows up with her head bowed and looking very humble. She’s not signing autographs. She’s not glad-handing. She’s publicly apologizing,” he said.

“Showing contrition gives the court and the government team confidence that you can be rehabilitated and that this won’t be a repeat offense.”

Diana Pisciotta, the president of Denterlein, a Boston public relations firm, said Huffman’s clear acknowledgment that her actions hurt her daughter should go a long way toward restoring her reputation. “She understands this was a bad choice for her kid, and that really humanizes you,” Pisciotta said.