SOMERVILLE — It’s a striking video. A bank robbery suspect is being chased by a police officer down the sidewalk in Davis Square when a bystander bumps him, throwing him off balance and forcing him to drop his backpack. The suspect recovers and continues to flee as a police officer enters the frame in hot pursuit.

VIDEO from a business in #Somerville next to Middlesex Federal Saving. Business owner tells us this man tried to stop the bank robber this morning, knocking a bag out of his hands. @WCVB pic.twitter.com/uFrPD4HFb9

It leaves you wondering: What would you do in those circumstances?

Dave Powers, the bystander who took action, said he was a little taken aback himself.

In an interview with the media, Powers was humble and downplayed his actions.

“I think I needed to see the video to believe it,” he said. 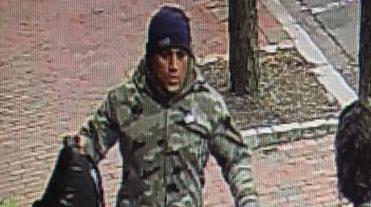 Police searched Somerville’s busy Davis Square area after a bank robber allegedly fired his gun to menace bank employees and then fired again at a police officer before fleeing on foot.

Powers said he saw the suspect fleeing from the scene and tried to help as best he could.

“I could tell he was being pursued by a police officer, so I was in position to react and had enough time to do so,” he said. “So I did, just hoping to slow him down.”

Jack Connolly, the owner of Wedgwood-Crane & Connolly, the insurance agency whose cameras captured the incident, said Powers lives in the neighborhood and works as a web developer in Kendall Square and was on his way to work when it happened.

“He saw the officer, reacted, slowed [the suspect] down, knocked that bag loose with the weapon. . . . He had no idea,” he said. “He’s really a hero. Absolutely.”

The result, Connolly pointed out, was that the suspect, who had traded shots with a police officer, was deprived of a gun. (Somerville police said the suspect is still considered armed and dangerous, however.)

Connolly said he was glad his company’s surveillance cameras recorded the suspect running away and hoped the video footage would help police in their investigation and lead to his capture.

Martin Finucane of the Globe staff contributed to this report.
Loading comments...
Most Popular in metro
Real journalists. Real journalism. Subscribe to The Boston Globe today.