In the aftermath of the devastating fire at Notre Dame Cathedral in Paris, local construction officials said Wednesday that the newly renovated Cathedral of the Holy Cross in Boston has a fire protection system that includes optical beam smoke detectors and sprinklers in the attic.

These new safety features were part of the $26 million renovation of the South End cathedral, which was undertaken by Suffolk Construction and took about two years to complete.

Chris Gedrich, a project executive for Suffolk Construction who worked on the cathedral project, said the church’s existing fire protection systems were left in place while workers built new systems around them.

The new smoke detectors at the cathedral, the mother church of the Boston Archdiocese, use projected beams of light to detect smoke in the air. If smoke is detected, an alarm is triggered, Gedrich said.

“Once the alarm triggers, BFD is rolling out to investigate,” he said. 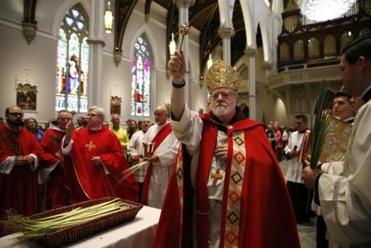 The cardinal said the fixup could prevent a fire like the one that ravaged Notre Dame Cathedral in Paris on Monday.

Firefighters don’t have to travel far — the Engine 3 fire house is behind the church, at the corner of Wareham Street and Harrison Avenue.

“It can activate a fire alarm fairly early in the process,” he said.

Gedrich said there’s also a Very Early Smoke Detection Alarm system that’s tied into a sprinkler system in the attic of the cathedral. If smoke is detected in the air, water will flow into the sprinklers so they’re ready, he said.

Gedrich said the Boston Fire Department toured the church during various phases of the construction project, so firefighters would be aware of the work that was going on and the layout of the work site. Firefighters also conducted several fire drills at the cathedral and practiced pulling out windows and finding the best ways to access the building, he said.

Gedrich said Suffolk followed Occupational Safety and Health Administration regulations and made sure there were enough fire extinguishers at the site. Whenever soldering work was being done, they had to get a burn permit and have a firefighter present, he said.

At one point during the project, six stories of scaffolding — rising 65 feet — stood inside the cathedral, he said.

Gedrich said a lot of planning was involved. Among the many questions that had to be addressed: What are the potential hazards? How do you get people down in an emergency? (As for the latter question, a manually operated elevator was installed to provide emergency access to the scaffolding).

“We rely heavily on teamwork and partnerships . . . and a lot of pre-analysis of hazardous areas before we start to work,” he said.