Wynn Resorts executives, aided by outside lawyers, covered up allegations of sexual harassment and misconduct against founder Steve Wynn, creating a culture in which employees were afraid to pursue complaints or believed that speaking up would be pointless, according to a scathing report presented before the Massachusetts Gaming Commission Tuesday.

As the commission began long-awaited hearings on whether the company should retain its casino license in light of the coverup, state investigators said that former company officials had carefully hidden numerous allegations against its ex-CEO — and in some cases their settlements — for years.

“Their efforts at secrecy made it exceedingly difficult, if not impossible, for gaming regulators to detect potentially derogatory information through typical regulatory means, which rely heavily on robust and voluntary self-disclosures by the applicant/licensee,” state investigators wrote.

In painstaking detail, the 200-page report, the product of an investigation that began 14 months ago, described a litany of misconduct allegations against the 77-year-old Wynn.

The report also found a litany of failures on the part of former Wynn executives: to apply the company’s policies and procedures to Steve Wynn, to properly investigate complaints against him, and to properly document the complaints. 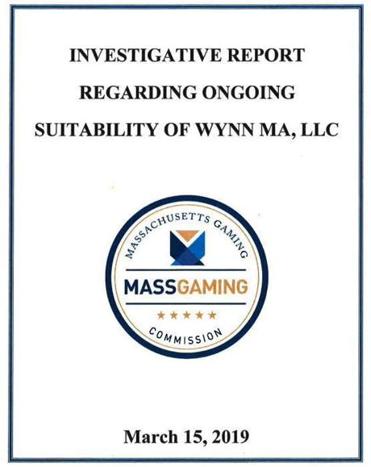 The 209-page report from the Mass. Gaming Commission said the company failed to follow its own policy mandating an investigation once the accusations were made.

Wynn Resorts did not contest the report’s basic findings.

“Failures at the company potentially diminished the company’s ability to safeguard the well-being of its employees,” the report stated.

Hearings on how the company handled the complaints, and whether it ever misled the commission, are expected to last several days. Wynn Resorts executives will seek to demonstrate that the company remains fit to hold a casino license, which it needs to open its $2.6 billion resort along the banks of the Mystic River in Everett. Named Encore Boston Harbor, the casino is scheduled to open in June.

State law requires casino license holders to conduct themselves ethically and gives the commission broad authority to determine which companies qualify. Character, reputation, and integrity are all elements of “suitability.”

The commission, which regulates the casino industry in Massachusetts, launched its investigation early last year after The Wall Street Journal published a report detailing allegations of sexual misconduct against Steve Wynn. The billionaire casino developer resigned, sold his stock in the company, and moved out of its flagship property on the Las Vegas strip.

In his opening statement Tuesday, Wynn Resorts chief executive Matthew Maddox said the public disclosure of the allegations against Wynn had left the company “shaken to its core,” in crisis, and in denial.

As investigations began, “the denial changed, and I began to realize that there were many victims — and those victims felt powerless,” Maddox said. “For that I am deeply remorseful. They felt that they didn’t have a voice. That if they were to speak up they could be retaliated against. Or if they did, it would not be investigated. For that I am truly sorry.

“I am sorry that our company did not live up to its values,” Maddox continued. “And when I started to realize that truth, I took it very personally. And decided that no matter who the CEO is of Wynn Resorts, or who the chairman is, that would never happen again.”

The company has replaced executives who failed to follow up on complaints against Steve Wynn, turned over most of its board, and instituted new policies and safeguards, Wynn Resorts officials have said.

Karen Wells, who directs the commission’s investigations and enforcement bureau, which produced the report, said that while the company’s positive changes are important, “remedial measures . . . do not erase the past.”

The report found that in 2005, a manicurist at the Wynn Las Vegas alleged to management that Steve Wynn had raped her and she had become pregnant. The manicurist reached a $7.5 million settlement with Wynn that was “structured for utmost secrecy” and prohibited her from speaking about the matter, the report found. Several people told investigators that Steve Wynn paid the settlement himself.

In a deposition for a separate civil proceeding, Wynn explained why he paid the settlement if he denied the accusation, the report stated.

“That’s the question, isn’t it?” Wynn testified. “That was 97 days after the opening of the Wynn Las Vegas at a cost of $2.75 [b]illion. . . . My name goes up on the sign at the [insistence] of all my colleagues. And along comes this gal who had a turn with me, obviously being advised on what to do, and says she is going to allege, which she alleged. And in a complaint anything is legal and free of liab[ility] and other recourse. Anybody who is over 10 years old and knows what goes on in the world knows what happens next. The story gets sensational.”

He asserted that the manicurist “initiated [the sexual encounter] when I was getting a manicure about 10 yards from here in my office. Bad judgment on my part. All the rest was a contrivance to extort money from me.”

Three former Wynn Resorts executives, not including Steve Wynn, became aware of the rape claim, the report says. None of the officials followed company policy and initiated an investigation, and no reports were made to the board of directors.

The Wall Street Journal revealed the nature of the settlement last year.

The Massachusetts investigation uncovered additional settlements, accusations of harassment, and allegations that Steve Wynn exposed himself to hotel staff.

Testimony Tuesday also suggested that local Wynn Resorts employees at Encore Boston Harbor properly handled harassment complaints against an employee in 2017, during the construction phase of the project, in contrast with the way some former company executives in Las Vegas had handled complaints about Wynn.

In a statement, Wynn’s lawyer, Brian T. Kelly, said Wynn “denies all allegations of nonconsensual sex and nothing in this report changes that.”

“In fact, the commission and its investigators have acknowledged today that it’s not their role to decide the truth or falsity of those allegations and that Mr. Wynn’s conduct is not the focus of their hearing,” Kelly said.

A review of the company’s finances found that Wynn Resorts retains solid earnings despite holding a high level of debt, that there is no threat to the funding for the Everett resort, and that the company’s financial stability has not been hurt by the scandal.

The hearings resume Wednesday with Wynn Resorts’ presentation, which is expected to focus on the sweeping changes it has made.

Elaine Wynn, whose former spouse is Steve Wynn, remains a major company shareholder and is expected to answer questions from the commission later in the hearing.

Material from the Associated Press was used in this report. Travis Andersen can be reached at travis.andersen@globe.com. Follow him on Twitter @TAGlobe.
Loading comments...
Most Popular in metro
Real journalists. Real journalism. Subscribe to The Boston Globe today.