He was never going to get a fair trial.

We might not ever know the truth about the Jussie Smollett scandal. What happened that frigid Chicago night of Jan. 28, when the actor-singer was allegedly attacked by two masked men, could be one of the many mad mysteries of this era.

They tied a noose around his neck, he said. “This is MAGA Country” was supposedly yelled.

Maybe he told the truth about the hate crime. Or not. Sometimes, people lie:

Last June, 21-year-old Mary T. Zolkowski was sentenced to 45 days in a Michigan jail for making up a story about being raped by a black man in a parking lot. She’ll be tested for drugs and alcohol and get counseling. 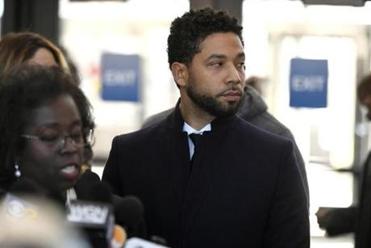 Prosecutors still insist Jussie Smollett faked a racist, anti-gay attack on himself. The “Empire” star still says he was assaulted by two men in downtown Chicago.

In August, a two-year, life-ruining tragedy in Connecticut came to an end when Nikki Yovino was sentenced to a year in jail for lying about a rape. The young black men she accused had to leave college. One lost a football scholarship.

Teresa Klein, 53, called the police and said Jeremiah Harvey, a 9-year-old black boy, sexually assaulted her in a New York deli last October. Video revealed his backpack brushed against her backside as he walked by. The child was traumatized. Public shaming was her punishment.

There was no clean shot at due process or cut-and-dried publicly shared evidence in Smollett’s case. Ever since late January, the case has become the longest and most twisted episode of “Empire” yet.

Perhaps not even Lee Daniels could have scripted this storyline for Jamal Lyon, the character Smollett plays on the hit hip-hop drama.

The court of public opinion started with believe survivors, but quickly shifted to liar-liar. Anonymous officials unethically leaked information about the Smollett case to the press. Hospital workers were reportedly fired for allegedly violating HIPAA privacy regulations and looking at his records.

Then we find out the attackers were actually Nigerian brothers. Smollett knew them. It’s widely believed he hired them to stage it all, paying them by check despite the memo line reading “5 week Nutrition/Workout program (Don’t Go).” It’s alleged he mailed a racist, homophobic letter to himself on the set of “Empire.” He was removed from the final two episodes of the season.

It got weirder. State Attorney Kim Foxx recused herself because of familiarity with a potential witness.

Smollett’s case, partially because of his fame, more so because of the political implications, overwhelmed the news cycle in sickening ways.

The possible lie got the president’s attention. It overshadowed the case of Christopher Paul Hasson, the Coast Guard officer alleged to be plotting a mass shooting of Democrats and celebrity media.

On Feb. 21, when Smollett turned himself into police and was charged with filing a false police report, Police Superintendent Eddie Johnson made a statement. He was enraged. Smollett lied, hurt the city of Chicago, hurt victims, owed apologies, and did it all for his career, Johnson said. And took his rant to “Good Morning America.”

Earlier this month, Smollett was slapped with a 16-count indictment. He pleaded not guilty.

Between the police leaks and the public vilification of Smollett, the judicial waters were muddied. Tuesday, all charges were dropped. Record expunged and sealed.

“After reviewing all of the facts and circumstances of the case, including Mr. Smollett’s volunteer service in the community and agreement to forfeit his bond to the City of Chicago, we believe this outcome is a just disposition and appropriate resolution to this case,’’ said the statement from spokeswoman Tandra Simonton.

Hours later, Johnson and Mayor Rahm Emanuel delivered a rebuttal and called it, um, a “whitewash of justice.” Maybe Smollett lied. And if he did, it’s wrong. But it’s not on par with the murder of Laquan McDonald and alleged Chicago PD coverup, or say, a legacy of Chicago police torture.

How we respond to victims is up to us, not the tragic song of Jussie Smollett.

But Johnson still wants an apology. He says an innocent person would want their day in court.

Do they? When the verdict is decided before a trial ever begins, it’s dangerous.

If Ernest Thomas, Samuel Shepherd, Charles Greenlee, and Walter Irvin were alive, maybe they could tell us.

In the summer of 1949, Norma Padgett, a white teen, accused the four young black men of kidnapping and raping her in Groveland, Fla. With little evidence beyond her word, they were deemed guilty. Thomas was murdered by segregationist sheriff Willis V. McCall. Shepherd and Irvin were sentenced to death. Greenlee, who was 16, got life in prison, served 12 years, and died in 2012. After the death penalties were overturned, McCall murdered Shepherd and shot Irvin — who stayed in jail until 1968 and died a year later.

In January, Florida’s clemency board posthumously pardoned all four men.

“The thing is, when you’re looking at these issues of pardons, you still have to have good justice even if someone wasn’t innocent,” Florida Governor Ron DeSantis told the Miami Herald.

There was no evidence of a rape. There was evidence of corruption and lies. But in the end, the pardon came down to the failure to deliver a fair trial. That matters.

Can we be sure Smollett was going to get that? It didn’t look like it. We may see the investigation live on — the FBI is handling the mail fraud accusation.

Even if we don’t, for Smollett, this case may never close.

It’s not shocking that he forfeited his bond and a push to remind people of his good character commenced.

For months, Smollett has been wearing his own brand of a Scarlet Letter, his name unfairly scarred in ways typically reserved for rapists and murderers. He can’t shake that off.

Even if his story is true, it’s too late. His empire is as broken as our system.

The lie, whether he told one or not, will be one he wears for the rest of his life. The questions will linger, a public shame to bear well beyond the 45 days Zolkowski served and the year given to Yovino.

The actor might get other roles, but Smollett is typecast as the boy who cried truth. Or wolf.

Jeneé Osterheldt can be reached at [email protected] and @sincerelyjenee.
Loading comments...
Most Popular in metro
Real journalists. Real journalism. Subscribe to The Boston Globe today.