Local Muslim and community leaders reacted with shock and horror Friday as they responded to reports of a mass shooting that killed at least 49 people at two New Zealand mosques.

Shaykh Yasir F. Fahmy, senior imam of the Islamic Society of Boston Cultural Center in Roxbury, told hundreds of worshipers at Friday prayers to stay strong in their faith, not to fear, and to call out the violent ideology of white supremacism that fueled the attack on the mosques in New Zealand and churches and synagogues in this country.

“This is terrorism. This is the ugliest form of terrorism. And too many people of all walks of life have suffered because of it,” he said.

He urged the worshipers to be as strong as palm trees. “You can hit, and you can [hit] hard. But you will not move us,” he said.

Fahmy asked the worshipers to push back against hate by turning toward God and being agents of mercy, goodness, and compassion. He said God teaches that “perhaps some day your enemy will become your close friend.” 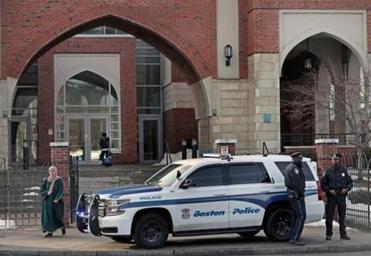 Area police step up patrols at mosques, houses of worship after deadly shootings

Police patrols and security has been stepped up at houses of worship in Boston and Cambridge Friday in the aftermath of deadly shootings at two mosques in New Zealand, local officials said.

Walsh used a Twitter post to express his solidarity with those affected by the massacre, writing that the city’s “thoughts are with New Zealand and with Muslims all across the world as we mourn the loss of the innocent lives taken from us in a place of peace and worship.

The Friday prayers that were so brutally disrupted in Christchurch are the Muslim equivalent of a Sunday church service, said Nichole Mossalam, director of the Islamic Cultural Center of Medford, in a phone interview.

She said the attacks have left many feeling vulnerable and frightened.

“This is a tragedy of immense proportions. It’s really affecting all of us right now,” Mossalam said.

“It’s chilling. It really is,” she said, adding that while there are no known specific threats to any local groups, mosques in the region have been in contact with authorities about increased security. “We’re working closely together to make sure that everybody feels safe and feels supported.”

Pointing to the manifesto of the alleged Christchurch killer, a document that refers to President Trump as “a symbol of renewed white identity and common purpose,” Mossalam expressed horror that “the leader of our country, our president, is now a figure to inspire these hate-filled acts.”

Boston?s thoughts are with New Zealand and with Muslims all across the world as we mourn the loss of the innocent lives taken from us in a place of peace and worship.

To my Muslim friends and neighbors, Boston stands with you and loves you. -MJW#NewZealandShooting

The Massachusetts Council of Churches released a statement condemning the killings and declaring solidarity with the Muslim community, recalling St. Paul’s instruction to “Rejoice with those who rejoice, weep with those who weep.”

“Today, the Massachusetts Council of Churches weeps with our Muslim kin following the hateful murders at a mosque in Christchurch, New Zealand,” the council said. “Our interfaith relations are a source of our rejoicing; we are called to be peaceful neighbors. Yet, today we share in the anger, weariness, and heartache of Muslims around the world, and especially our Muslim neighbors across Massachusetts.“

The council offered both tears and prayers for the Muslim community. “May you be strengthened in the days ahead. May you know you are are valued and beloved by our diverse interfaith community.”

“To our Muslim brothers and sisters in New Zealand who are suffering from today’s murderous attacks on innocent people of faith and goodwill during their time of prayer, we stand with you in condemning this horrendous assault on human dignity,” he said in a statement.

“In this dark hour know that you are not alone, we join together with many others in the religious and civic communities who embrace you in concern and support,” he said.

Boston Police Commissioner William Gross said after the Roxbury services that security was being stepped up. “You will see police coverage not only from BPD but all of our law enforcement entities,” he said. But he also said security wasn’t just up to the police.

“The overall theme is this: We have to look out for each other, protect each other,” he said. “There’s too many guns in the world and folks of ill intent. So we have to assure each other that we’re looking out for one another.”

“We’re asking folks, if you see something, say something,” he said. “We don’t let cowards beat us at all. We show them with community we can defeat them.”

US Representative Ayanna Pressley of Massachusetts also turned to Twitter on Friday morning, as she expressed outrage over the “49 lives stolen from this earth because of a senseless, hateful, islamaphobic act of terrorism in a place of worship.”

Pressley said the massacre “is an attack on all of us” and expressed love for Muslims in her congressional district and globally. She pledged to push for tighter gun regulations “to put an end to this public health crisis.”

49 lives stolen from this earth because of a senseless, hateful, islamaphobic act of terrorism in a place of worship. The longer we wait to regulate the gun industry, the more lives we will lose. I promise to continue working tirelessly to put an end to this public health crisis.

I believe that our humanity is tied. The #christchurch attack is an attack on all of us. My heart is breaking for the worshippers slain during prayers by a man driven by hatred and white supremacy.

Rhetoric from global leaders drives this type of vitriol and we must all play a role in the healing, reconciliation and justice that needs to follow. To my Muslim brothers & sisters in the #MA7 & around the world you are seen and you are loved.

Nihad Awad, national executive director of the Council on American-Islamic Relations, condemned the killings and called on “leaders in our nation and worldwide to speak out forcefully against the growing anti-Muslim and anti-immigrant hate that appears to have motivated these white supremacist terrorists.”

Lisa Wangsness and Travis Andersen of the Globe staff and Globe correspondent John Hilliard contributed to this report. Jeremy C. Fox can be reached at jeremy.fox@globe.com. Follow him on Twitter @jeremycfox.
Loading comments...
Most Popular in metro
Real journalists. Real journalism. Subscribe to The Boston Globe today.