Aaron J. Hernandez’s first-degree murder conviction must follow him to his grave, the state’s highest court ruled Wednesday as it jettisoned a murky 44-year-old legal principle that would have erased his conviction.

The former New England Patriots star was convicted in Bristol Superior Court in 2015 of murdering Odin L. Lloyd in June 2013 in North Attleborough, but he committed suicide in his maximum security prison cell in 2017 before the appeal of his murder trial could be heard.

A lower court judge had thrown out the conviction, relying on a legal principle known as “abatement ab initio” that became part of Massachusetts case law via a 1975 ruling by the state Supreme Judicial Court.

In its 6-0 ruling Wednesday, the high court said it could not find a “reasoned analysis” to have ever used the concept in the first place.

And it won’t be used any more in Massachusetts, Justice Elspeth B. Cypher wrote. 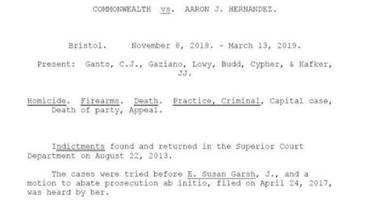 “We conclude that the doctrine of abatement ab initio is outdated and no longer consonant with the circumstances of contemporary life, if, in fact, it ever was,’’ Cypher wrote. “The record will accurately reflect the case as it was at the time of death; it will reflect the status quo.”

“The family of Odin Lloyd is pleased that the Supreme Judicial Court of Massachusetts has determined to reinstate the conviction against Aaron Hernandez,” Sheff said in a statement. “This decision has helped the family to obtain closure from the horrible loss of their beloved son Odin. He was an inspiration to all who knew him and a devoted member of his family and the community. It has solidified their faith in the Massachusetts Justice System.”

Hernandez’s docket sheet in Bristol Superior Court in Fall River will now be rewritten to permanently note his conviction ended “the defendant’s presumption of innocence.” The docket will say his conviction was on appeal but it was unresolved because he died.

Hernandez’s court-appointed appellate attorneys, John Thompson and Linda Thompson, said in a statement that they would ask the SJC to change its ruling.

“The SJC did not state a cogent reason for applying this new rule to Mr. Hernandez’s case, and there is no reason in the record that justifies that aspect of this decision,’’ the attorneys said.

Jose Baez, the high-profile lawyer who led Hernandez’s defense team during a separate murder trial in 2017 in which he was acquitted of killing two men in a drive-by shooting in Boston’s South End in 2012, also criticized the SJC ruling in a statement.

“Today’s ruling comes as a significant disappointment to Aaron’s family,” said Baez, whose current client roster includes disgraced film mogul Harvey Weinstein. “However, it will be a hollow and short-lived moment for the Commonwealth, since this decision is not only cruel for Aaron’s family, but also disappointing and discouraging to all of those families who seek to clear their loved ones’ names, in a flawed system where wrongful convictions are reversed every day.”

Baez added that “based on the evidence we had ready to present” at the time of Hernandez’s death, “reversal of his conviction was a near certainty.”

During oral arguments last year, Bristol District Attorney Thomas M. Quinn III had urged the court to consider a new rule that would ban a convicted killer from having their personal history rewritten by committing suicide as Hernandez did.

In a statement Wednesday, Quinn said the ruling shows that relatives of crime victims, especially murder victims, are being heard by courts. He also said that the SJC has made it clear that Hernandez — and others like him — cannot shed their past through suicide.

“The interest of all parties in a conviction, especially victims and their families, was never fairly considered prior to today’s ruling,’’ Quinn said. “He was guilty of the brutal murder of Odin Lloyd. What he could not have accomplished in life, he should not be able to attain in death.”

In its ruling, the court said it did not see a need to spell out rules specifically for defendants who commit suicide. The new approach, the court said, is clear that convictions will remain intact “for the simple reason that, by whatever cause, the defendant died.”

Martin W. Healy, chief legal counsel for the Massachusetts Bar Association, said in an e-mail that the ruling “makes it crystal clear that the SJC is placing victim’s rights paramount to those of any other party on appeal.”

Hernandez was 27 years old when he died, a death that came after he earned millions of dollars as a star tight end for the Patriots. Following his death, Boston University researchers studied his brain and concluded he had suffered the most severe case of chronic traumatic encephalopathy they had then seen among younger athletes in their study of CTE.

Under state and federal law, once a set of facts is litigated in one case, the same facts or issue cannot be invoked in a separate lawsuit, a concept lawyers call “issue preclusion.” Some lawyers argued that eliminating Hernandez’s conviction transformed him into an innocent man whose estate had more firepower in civil litigation.

The SJC said it did not know whether that was accurate. “We have not been made aware of any existing or potential civil obligations or proceedings that might be affected by the ultimate fate of the defendant’s conviction and appeal,’’ the court wrote in a footnote.

The court also tackled the contention that in Massachusetts, there are two steps to a criminal case — a conviction followed by an appeal — and that by separating them, a criminal defendant’s constitutional rights to a fair trial are blunted.

Not so, the court said.

“In Massachusetts, the rendering of a guilty verdict [following a trial] and the resulting imposition of a sentence essentially constitute a final judgment in a criminal case, immediately whereupon the consequences may be imposed on the defendant, even if an appeal is taken,’’ Cypher wrote.

A large chunk of the 36-page ruling summarized the effort by the court — arguably the smartest legal minds in Massachusetts — to learn just when the concept of “abatement ab initio” — “ab initio” is Latin for “from the beginning” — was embedded in Massachusetts law, and why it was done.

The SJC said they discovered it was embraced, most significantly in a 1975 case, “for no other reason than because that was the practice elsewhere. . . . We have been unable to discern a reasoned analysis for the adoption of the abatement ab initio doctrine.”

Currently, 18 states and the federal courts address the issue of what to do when a defendant dies before an appeal is complete in a variety of ways. The federal practice, the SJC said, generally tracks the way Massachusetts once handled it — by essentially declaring the person to be innocent.

He applauded the high court ruling. “Today, many clergy sexual abuse victims of Father John J. Geoghan feel as though they have not been forgotten, even though the ruling of the court does not apply retroactively to the Father Geoghan conviction,’’ he said.

Travis Andersen of the Globe Staff contributed to this report. John R. Ellement can be reached at ellement@globe.com. Follow him on Twitter @JREbosglobe.
Loading comments...
Most Popular in metro
Real journalists. Real journalism. Subscribe to The Boston Globe today.