John B. Wilson’s son wasn’t a standout water polo player, certainly not someone who would have attracted the attention of the University of Southern California, whose team had won a record-setting five consecutive national championships.

But the USC coach nonetheless designated him as a top recruit, gushing that the teen could swim 50 yards in 20 seconds, a full 2 seconds faster than the best players on the elite squad.

“This kid can fly,” the coach, Jovan Vavic, wrote, according to a federal affidavit.

Now, Wilson is among dozens of wealthy parents charged by federal prosecutors with paying princely sums to fake their children’s test scores and sports credentials as part of a bribery scheme to gain them admission into college and universities.

Court papers detail how Wilson, and other rich parents, worked closely with William “Rick” Singer, the accused mastermind of the scheme, to slip children into what they called the “side door” available to competitive athletes at selective colleges. 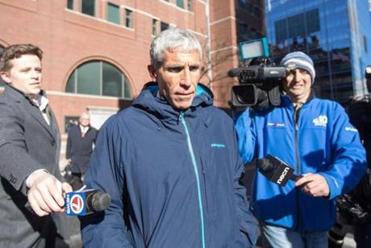 A California businessman allegedly collected $25 million in bribes to help applicants gain acceptance to elite colleges as part of a nationwide scandal.

A 59-year-old investor with homes in Hyannis Port and Lynnfield, Wilson allegedly paid Singer $220,000 to get his son into USC in 2014 and $1 million last year to try to secure spots for his daughters at Stanford and Harvard, after Singer began cooperating with federal authorities.

Wilson was arrested in Texas on Tuesday and charged with honest services and mail fraud. He could not be reached for comment on Wednesday.

The founder of Hyannis Port Capital, a real estate and private equity firm, he has had a long career in business, with top positions at Bain and Co., Staples, and the Gap. His seaside home in Hyannis Port is often mistaken as part of the Kennedy family compound.

Singer told federal authorities he began working with Wilson in 2012 and that Wilson agreed to make payments to the Key Worldwide Foundation, a nonprofit that Singer allegedly used to funnel bribes to college coaches.

Wilson’s wife indicated that their son was “unaware of this arrangement,” and Wilson was concerned the other players at USC would know their son was a “bench warmer side door person” if he were recruited for the team, according to court papers.

“Obviously his skill level may be below the other freshmen,” Wilson wrote in an e-mail to Singer, according to court papers. “In your view will he be so weak as to be a clear misfit at practice etc?”

Singer assured Wilson his son would not actually compete for the Trojans. Singer said he would be listed on the roster and have to pass drug tests and attend team functions but would not travel for games or attend practices.

“Frankly, after the 1st semester, he can move on,” Singer wrote.

Singer provided Vavic, who has also been charged, with fake swimming times and awards for Wilson’s son, and Vavic presented the teen to the USC subcommittee for athletic admission. On Feb. 28, 2014, Wilson’s son was accepted to USC.

“Thanks again for making this happen!” Wilson e-mailed Singer, according to court papers. “Pls give me the invoice. What are the options for the payment? Can we make it for consulting or whatever from the [K]ey so that I can pay it from the corporate account?”

Singer told Wilson he could list the payments as a consulting fee so he could deduct them from his taxes as a business expense. “Awesome!” Wilson replied.

Four years later, in September 2018, Wilson got back in touch with Singer to ask about “side door” opportunities for his two daughters.

By this time, however, Singer was working with federal investigators, who were recording his phone calls and orchestrating his interactions with parents. On Sept. 29, 2018, Singer promised Wilson that his daughters could attend any college they wanted as athletic recruits.

“What if they’re not really that good?” Wilson asked, according to a transcript of the call. “I mean, they can do some crew, but I don’t know they’re gonna be good. [One daughter’s] not even that good competitively at sailing. She just taught sailing and did sailing in . . . [the] yacht club.”

Singer told Wilson not to worry, that he could tell coaches, “ ‘Hey, this family’s willing to make the contributions. She could be on your team.’ ”

When Wilson asked what would happen if his daughters weren’t accepted, Singer told him not to worry. “It’s a done deal,” he said.

With that, federal authorities say, Wilson decided to pursue the “side door” at Stanford and Harvard. In October 2018, Wilson’s company wired $500,000 to an account that Singer had opened in Massachusetts at the direction of federal authorities.

Singer told Wilson later that month that the Stanford sailing coach, John Vandemoer, would use the payment to secure a spot for one of his daughters, but not the other, because he “has to actually recruit some real sailors.”

Wilson laughed, according to a transcript of the call.

“Yeah,” Singer said. “So that Stanford doesn’t catch on to what he’s doing.”

Vandemoer pleaded guilty on Tuesday in federal court in Boston to racketeering conspiracy.

Less than two weeks later, on Dec. 11, 2018, Wilson’s company wired the second payment of $500,000 to the Massachusetts bank account that Singer had opened in the name of the Key Worldwide Foundation.

Correction: An earlier version of this story incorrectly stated that John B. Wilson was ordered in 2014 to pay a $2.9 million civil penalty for falsely inflating the value of an investment pool. The John B. Wilson involved in that case is not the same John B. Wilson accused in the college admissions case.