The Charlestown man accused of kidnapping a 23-year-old woman from downtown Boston on Saturday night has a long history of menacing behavior toward women, and at least one ex-girlfriend accused him of sexual assault, according to court documents.

“He has hit me, he has forced me to have sex, and he has insulted me constantly,” wrote one woman in her application for a restraining order in 2004. “My children are scared of him, especially the younger one and I’m afraid he might hurt me or the children.”

Victor M. Pena, 38, was arrested by Boston police Tuesday afternoon after a citywide search for Olivia Ambrose of Wenham, who was reported missing Sunday after leaving Hennessy’s bar Saturday night and failing to answer her phone since. Police found Ambrose inside Pena’s Walford Way apartment in the Bunker Hill housing development, where court documents state Pena had installed extra locks on the front door.

Pena pleaded not guilty to a single count of kidnapping in Charlestown Municipal Court on Wednesday. He was ordered to undergo a 20-day mental competency evaluation. He wept and appeared to be talking to himself during the hearing.

Pena’s brother said in an interview Wednesday that Pena suffered brain damage as a child that left him with the mental capacity of a young teenager and said sometimes he scared women unintentionally. 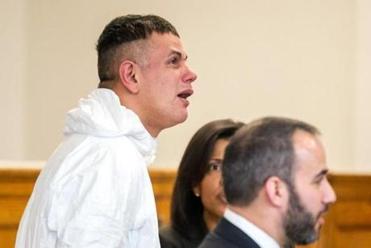 Victor Pena, accused of kidnapping Olivia Ambrose, sobbed and appeared to be talking to himself during a court appearance where he was ordered to undergo a 20-day mental competency evaluation.

But court documents tell a darker and more frightening story.

The woman from the 2004 restraining order said Pena had circled her building hurling insults, including, “You bitch,” “You’re ugly and fat,” “I hate you,” and “You’re going to die.” Her children, then aged 10 and 9, could hear him. Pena, she wrote, had tried to break into her apartment and had been calling her every day, up to 10 times a day, and leaving messages.

At the time, court documents state, Pena was staying at the Lemuel Shattuck Hospital Shelter for Homeless Men in Jamaica Plain. A Dorchester Municipal Court judge granted the restraining order, and it was later extended for a year.

In 2008, another woman who had a child with Pena took out a restraining order against him, writing that she feared for herself and her 2-year-old daughter.

She had been in a relationship with Pena for three years, and he was controlling, she wrote.

“He always wanted me to do what he wanted, and if I did not do it he got aggressive with me [physically] and verbally,” she wrote.

She described a confrontation that occurred at the home of Pena’s sister in February 2008.

As the woman was trying to leave the residence, she said Pena closed the door and told her she wasn’t going anywhere.

“He came and he grabbed my neck,” the woman wrote.

She said Pena’s sister intervened and asked what was happening. When Pena went to the bathroom, she said she slipped out of the house and went to her apartment.

About 20 minutes later, Pena showed up at her door, the woman wrote.

“He told me to return to him and I said no,” the affidavit said.

“He [was] always abusing me since I met him,” the woman wrote. “And I [feel] much fear and I’m afraid for my life and my daughter’s.”

While the order was in effect, Pena allegedly went to the woman’s home in Dorchester on April 2, 2008. Police were summoned to the residence, where Pena told officers that it was his birthday and he wished to see his child, according to a report filed in Dorchester Municipal Court. He said he had recently moved from an apartment in Dorchester to the Lemuel Shattuck Hospital Shelter for Homeless Men in Jamaica Plain and hadn’t been served with the restraining order, the report said.

A third girlfriend wrote in a 2013 application for a restraining order against Pena that when she ended a two-month relationship with him, he punched her and began calling and messaging her with explicit and humiliating sexual taunts.

“I receive a call by him suggesting to have sexual relationship with explicit words and describing what he wanted to do to me,” she wrote. She changed her number, but a short while later he broke her car window to take money, threatened to poison her dogs, and sent her messages calling her a pig, a lowlife, and a cow, and saying he didn’t know why she was still alive, she wrote.

In the housing project where Pena had lived for about a decade, residents described an erratic and threatening man who hurled feces from his windows and jeered at young girls, trying to lure them into his apartment.

Transit Police also had multiple run-ins with Pena over the past 10 years, including one instance when he allegedly followed a woman on the train and tried to look up her skirt, then paced and stared at her when she went to get help.

But some who know Pena said he was not capable of violence.

A woman who has a child with Pena began screaming when a reporter told her about the allegations against him.

“He would never do nothing like that!” shouted the woman, whose name the Globe is withholding to protect the identity of her son.

The woman said Pena had never supported their child, and she had kept him away from the boy, though she wouldn’t explain why.

“It’s financial and family reasons,” she said. But she insisted that Pena had never been violent.