In a rare move that exposed a widening split over how to handle undocumented immigrants accused of crimes, Governor Charlie Baker called on court officials Monday to remove a Newton District Court judge from presiding over criminal cases while a federal grand jury investigates whether she helped a defendant evade federal immigration officials.

“I don’t believe she should be hearing criminal cases until that federal case is resolved,” Baker said, referring to Judge Shelley M. Joseph. “Look, judges are not supposed to be in the business of obstructing justice.”

Baker’s remarks to reporters at the State House followed a Globe report that a federal grand jury is examining whether court personnel, including Joseph, allowed a twice-deported immigrant with multiple aliases to leave through a rear courthouse door while an US Immigration and Customs Enforcement agent waited to take him into custody.

Judges in Massachusetts who have come under fire have sometimes been reassigned to handle administrative matters or only civil cases. But they have been rarely removed from the bench entirely.

State trial court rules require that judges and staff neither help nor hinder federal immigration agents. Calling the Globe report “extremely troubling,” Baker said he believes Joseph, whom he appointed to the court last year, may have violated court policies. 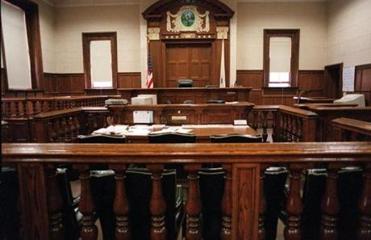 ICE agent was in courthouse. Did judge and others help man flee?

There’s a federal probe into whether a Newton District Court judge and court personnel helped an undocumented immigrant leave through a back door and avoid arrest.

In a courtroom recording of the April 2 arraignment, defendant Jose Medina-Perez’s attorney can be heard discussing in hushed tones his client’s predicament with Joseph and a Middlesex County prosecutor.

“ICE is going to get him,” Joseph said — before instructing a clerk to turn off the courtroom’s audio recorder. The next 58 seconds went unrecorded.

Minutes later, Medina-Perez, who was facing drug charges, was escorted downstairs, released from custody, and allowed out through a back door, according to two people briefed on the episode. He scaled a fence and took off, leaving the ICE agent behind, the people said.

Joseph, who spent years as both a criminal defense attorney and a prosecutor before joining the judiciary last year, declined to comment.

Middlesex District Attorney Marian Ryan also declined to comment, and a spokeswoman for US Attorney Andrew E. Lelling said she could not confirm or deny the existence of a grand jury probe.

Baker said he intended to talk to court officials, adding that there’s precedent for sidelining a judge. A state trial court spokeswoman declined to comment on Baker’s remarks.

News of the grand jury investigation exposed a sharp rift Monday in Massachusetts’ political, legal, and law enforcement communities. While some saw the court’s alleged actions as a rightful reaction to overly aggressive federal immigration policies under President Trump, others see the Newton court workers as flouting the law and setting a dangerous precedent.

The Massachusetts Association of Criminal Defense Lawyers released a statement opposing any federal investigation, saying ICE has long “disrupted the proper administration of justice in our state courts and has undermined the rights of defendants and victims of crime.”

The group called on Attorney General Maura Healey to file suit to bar ICE agents from making arrests outside state court. “Our judges and court personnel must operate free from federal interference and intimidation,” the group said.

ICE spokesman John Mohan said courthouse arrests are sometimes necessary because of the “unwillingness” of local agencies to cooperate. Many of the immigrants ICE is looking for “have already taken affirmative measures to avoid detection.’’

“ICE Officers take their responsibility for enforcement of this nation’s immigration laws very seriously and are committed to ensuring public safety,” Mohan said.

The Supreme Judicial Court of Massachusetts ruled last year that police could not keep someone in custody solely on an immigration violation. Several Massachusetts communities, including Boston and Newton, have declared themselves sanctuary cities that will not help ICE round up undocumented residents.

Baker has sought to strengthen local police officers’ authority to detain undocumented defendants who have been convicted of violent crimes. Similar battles over immigration enforcement are playing out in cities and states across the country.

“I would see it as a form of civil disobedience,” he said. “It’s just unusual that a judge might be the one who did it.”

Some undocumented immigrants around Massachusetts have refrained from sending their children to school, driving to work, or taking the train to a heavily Latino neighborhood for fear ICE officers might be waiting to grab them, Finfer said.

“I don’t know how you can send a message to the public that you’re there to protect people from criminals and then undermine law enforcement by letting them out the door,” he said. “It’s as bad as it gets when we have courts undermining law enforcement. They’re supposed to work together.”

“I’m not suggesting we shouldn’t be deporting these people,” he said. “But we have people who are being grabbed coming in the door. I’m all for throwing people out who commit a crime. But I’m a big believer in getting my pound of flesh first.’’

Massachusetts’ judges have rarely been disciplined.

Pittsfield judge Thomas Estes resigned in May after the Supreme Judicial Court ordered his indefinite suspension following his admission of having sex with a social worker in the court.

Retired Boston Municipal Court judge Raymond Dougan was reassigned to hear civil cases in 2009, after then-Suffolk District Attorney Daniel Conley complained to Dougan’s supervisor that he was biased against police and prosecutors. Dougan remained on the civil side nearly two years before he was allowed to resume hearing criminal cases.

Medina-Perez’s actual age and identity are shrouded in mystery. He was arrested on March 30 by Newton police and charged with possession of drugs, as well as being a fugitive from justice — officers believed he had an outstanding warrant for a drunken driving arrest in Pennsylvania, records show.

At the April hearing, his attorney, David Jellinek, discussed the case in a sidebar conversation, captured on audio, with Joseph and Middlesex County prosecutor Shannon Jurgens.

“ICE will pick him up if he walks out the front door,” Jellinek said. “But I think the best thing for us to do is clear the fugitive issue and release him.”

The prosecutor noted he had an immigration detainer but said “that’s separate and apart from what my role is.”

The prosecutor asked Joseph to dismiss the warrant matter and proceed with the drug charges, neither of which required him to be held.

The prosecutor then dropped the fugitive warrant charge because the Pennsylvania mug shot did not match the man in the courtroom, the district attorney’s office said.

Medina-Perez was ordered to appear again in court in May. Jellinek asked the judge to allow him to accompany Medina-Perez downstairs with an interpreter because “he has got some property” there.

Shortly later, a courtroom employee informed the judge that “there was a representative from ICE here . . . requesting permission to visit lock-up.”

“I’m not going to allow them to come in here,” Joseph replied. Minutes later, Medina-Perez left through a rear courthouse door, according to two people briefed on the incident.

He was arrested later in April in Roslindale and released on bond by an immigration judge, ICE said. He was deported twice before, ICE said, and his real name is Oscar Manuel Peguero. He is allegedly a 38-year-old citizen of the Dominican Republic.

“He’s someone who richly deserves to be deported. And here you have a judge who thinks it’s her place to get him beyond the reach of ICE,’’ Mehlman said. “You want to take your political stands, but don’t do it by endangering public safety.”