The Bristol County sheriff’s office this week released more than 900 phone calls that the late New England Patriots star Aaron Hernandez made from behind bars, offering deeper and more nuanced insight into his state of mind in the immediate aftermath of his arrest on murder charges.

The calls from the Bristol County Jail in North Dartmouth cover the earliest days after he was taken away in handcuffs in June 2013, and include emotional conversations he had with some of the people he was closest to, including his distraught fiancee, his best friend, and his mother. They also show him trying to stay positive and picturing his future as a free man, back on the football field.

RELATED: Listen to the ‘Gladiator’ podcast series about Aaron Hernandez

In a call in August 2013, Hernandez told his former Patriots teammate Brandon Spikes, “Check this out: I get to pick what team I want to be on once I get out.’’

In the calls, he also talks about financial arrangements, reacts to suggestions that he had a gay relationship in high school, and expresses resentment toward the Patriots.

News of the calls prompted a rare response from his mother, Terri Hernandez, who has declined nearly all media interviews since her son was arrested. Reached by the Globe Thursday night, she reflected on their relationship. 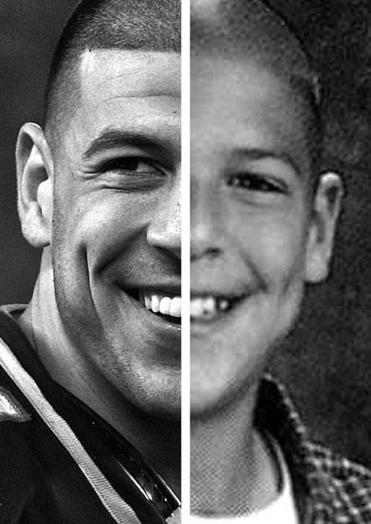 Listen to Gladiator: The podcast series on Aaron Hernandez

The story of a profoundly troubled young man and the ugly underside of America’s most popular sport.

“He changed drastically from the son I once knew. I couldn’t grasp or make sense of what was going on in his life and the anger he held and most of the time it was towards me,” she wrote in an e-mail. “I believe he had to blame someone for all his problems and it was me. I never knew about the abuse molestation and him being gay before he told me in January 2017. If he had told me earlier in life I could have helped him. As far as the CTE no one would have been aware of the damage to his brain until his death. I will never fully understand what happened.”

The new batch of phone calls was released in the wake of a Globe Spotlight series and podcast on Hernandez’s life and death. Those stories included an examination of his calls while at the Suffolk County Jail in Boston, which were made when he had already been awaiting trial for more than a year and grown accustomed to life in jail.

The Bristol jail originally withheld the calls Hernandez made there between June 2013 and April 2015. The Globe challenged the withholding of the recordings, which are public records, with the secretary of state’s office.

In his first calls from the Bristol jail, Hernandez often seemed to be trying to console those closest to him with upbeat language, including speaking of his future return to pro football.

“I’m still going to be young when I get out of jail, so you know I’m going to try to play ball again,’’ Hernandez told his friend Mike Pouncey, a Los Angeles Chargers center who played with him at the University of Florida.

The call, among others, may have legal implications for Hernandez’s only child, Avielle, now 6. The National Football League has asserted that Hernandez was “retired” from football after his arrest, rather than fired. As such, Hernandez’s estate would not be entitled to join hundreds of others who have been compensated by the league for brain diseases such as chronic traumatic encephalopathy, or CTE, which have been linked to football.

Hernandez was diagnosed with one of the worst cases of CTE for someone his age, after he committed suicide in the Souza-Baranowski Correctional Center in Shirley last year at age 27.

Avielle Hernandez’s lawyer, Brad Sohn, said he plans to introduce Hernandez’s phone statements about returning to football in her case against the NFL.

“Certainly, this evidence would seem to further belie the notion that Aaron Hernandez was retired or planned to retire,’’ Sohn said.

‘I’m still going to be young when I get out of jail, so you know I’m going to try to play ball again.’

— Aaron Hernandez, in a call from jail to friend Mike Pouncey

The former Patriots tight end’s calls were made after he was arrested for murdering Odin Lloyd.

Hernandez discussed much more than his football aspirations in his calls. Based on a preliminary review of the recordings, he also confronted questions about his sexuality and drug use. He spoke about financially supporting the people he loved, including his childhood friend and longtime confidant, Ryan McDonnell. He complained that Patriots coach Bill Belichick turned his back on him and that Bristol County Sheriff Thomas Hodgson had exploited him for publicity.

He also bristled at friends who sold his letters from jail and said he might sell his own writings, including a message to the Patriots.

“It’s gonna speak good,’’ he told Spikes, “but it’s also gonna have some of my digs and daggers in it.’’

Hernandez said he expected to be acquitted of the murder charge but convicted of a lesser count involving an unlicensed handgun police seized in his home. Being held without bail was good, he told friends, because his time served would be deducted from his anticipated sentence on the gun charge.

As it turned out, Hernandez was convicted on both the murder of Lloyd and gun charges and sentenced to life in prison without parole. He later was acquitted of charges that he killed two other men, and his lawyers had planned to appeal his murder conviction before he hanged himself in prison five days after the acquittal.

In his first days at the Bristol jail, Hernandez spoke primarily to his fiancee, Shayanna Jenkins, to McDonnell, and to his mother. The calls were often filled with anguish as those closest to him grappled with the likelihood he would be locked up for nearly two years before even going to trial.

Even the football-hardened Pouncey told Hernandez he had shed tears over his arrest.

“I done cried too many nights,’’ Pouncey says.

His fiancee said she wished he would just come home, so they could start over as a family.

His close friend McDonnell, too, was overwrought.

“Every time I stop and think, it just [expletive] shatters my heart,’’ he told Hernandez. “I can’t even [expletive] wrap my head around it. And I’m so mad at you.’’

His mother wept on his first call to her. She said she loved him but couldn’t visit because she didn’t want to see him in jail. Later, she would visit him behind bars.

The calls show that Hernandez financially supported a number of people close to him. In some conversations, he talked about setting aside $500,000 for Jenkins and their child, and $120,000 for McDonnell.

Hernandez designated his agent, Brian Murphy, as his power of attorney to oversee his finances.

Hernandez told Murphy he wanted Jenkins to receive $3,000 a month and to look for more affordable housing than the home in North Attleborough he had bought for $1.3 million.

Some issues were even more personal. Hernandez was stunned to learn that a mutual friend had purportedly seen him having sex in high school with Dennis SanSoucie, his quarterback at the time. SanSoucie had cited the incident in a Globe interview.

In one call, Hernandez’s friend Brandon Beam told him that people in their hometown of Bristol, Conn., were describing him as gay, based in part on the incident with SanSoucie.

“The street don’t know nothing,’’ Hernandez replied. “They are making [expletive] up.’’

He also scoffed at reports that he was a “dust head,’’ a user of PCP, or angel dust.

In brighter moments, Hernandez told friends he was working hard to return to the NFL. He said he was simulating his football workouts and drinking protein shakes.

Hernandez ruled out returning to the Patriots and expressed disdain for Belichick, citing the coach’s lack of support amid the allegations against him.

“Bill Belichick is the number one person who teaches his team, don’t listen to the media because most of the time they make up stories and they’re rarely true,’’ Hernandez told Spikes. “I wish he practiced what he preached, especially coming to me, throwing me in the dust with the wind.’’