A Plymouth county commissioner and a high-ranking Quincy city employee quietly avoided criminal charges sought by police in secret court hearings over the past several months, the Globe has learned.

The county commissioner was accused of slugging a patron at an Elks Lodge in Quincy so hard that the victim ultimately went to the hospital for observation. The Quincy engineering manager allegedly drove recklessly at a construction site, defied orders of a MBTA Transit police officer, and, according to the police report, declared he was on urgent business for the mayor.

In both cases, longtime Quincy District Court clerk magistrate Arthur Tobin refused to make the records public, even though district court guidelines recommend clerks consider releasing files in high-profile cases. Instead, the Globe obtained copies of police reports and conducted interviews to piece together what happened.

The Globe’s Spotlight Team learned about the allegations while investigating the unusually secretive process that Massachusetts uses to vet requests for criminal charges, one not replicated in any other state.

In tens of thousands of cases a year, clerks and assistant clerks hold confidential hearings with police and defendants — called “show cause” hearings — to decide whether there is sufficient evidence to issue criminal complaints. 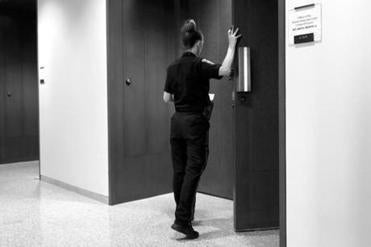 Inside our ‘secret courts’

In these private hearings, who you are — and who you know — may be just as important as right and wrong. Read the Spotlight report.

But the Spotlight Team — in an investigation published in September, “Inside our Secret Courts,” — found that clerks frequently do not issue complaints, even when they find probable cause to believe someone committed a crime, the legal standard to issue charges. The piece highlighted several cases where people with connections or the money to hire a attorney avoided charges in the private hearings.

Last year, a Hingham clerk told a former police chief that he would dismiss a shoplifting case before it ever became public if the chief and his wife wrote letters of apology, citing the efforts of their lawyer, a former state representative, as the reason for this special consideration. And earlier this year, the Globe reported an assistant clerk in Quincy refused to issue drunk driving charges against state Senator Michael Brady, then a Brockton city councilor, after Brady crashed his car into a telephone pole in 1998 and told police he had “a lot of beers” at a bar; the Globe learned about the incident only after Weymouth police cited the Brockton Democrat again for operating under the influence in March.

In both of the two more recent cases, Quincy clerk Arthur Tobin said assistant clerks dismissed the cases at the request of the parties. He declined to say whether they found sufficient evidence to issue criminal charges.

According to Quincy police records, an Elks Lodge member told police that Plymouth County Commissioner Gregory Hanley “sucker punched” him at the club and knocked him off a stool on the day before St. Patrick’s Day.

The victim told police that Hanley, a former Quincy City Council member, was so intoxicated that he mistook the club’s kitchen for a restroom. Officers said they spoke to bartenders who said believed there was a verbal exchange before the altercation and saw a large group separating the two.

Quincy police told the Globe the case was dismissed at a hearing in July because the victim no longer wished to go forward after reaching an undisclosed settlement with Hanley. It is not clear how much, if anything, the Pembroke Democrat paid the victim; police declined to name the victim or pass along the Globe’s interview request. Hanley and his attorney did not respond to requests for comment. Tobin, the Quincy clerk, said the case was withdrawn before the hearing began.

In the second case, Frank Tramontozzi, who oversees projects related to downtown redevelopment for the City of Quincy, was accused of reckless operation of a motor vehicle, making excessive noise with his horn, and failing to submit to orders by a police officer.

An MBTA Transit Police report said Tramontozzi started honking continuously at a box truck blocking his path in July. When an MBTA transit officer asked Tramontozzi to stop, Tramontozzi reportedly replied: “No, get out of my way,” then tried to go around the truck by entering oncoming traffic.

When the officer tried to stop his car, Tramontozzi reportedly yelled: “Get out of my way,” according to the police report. “I have an emergency for the mayor. I work for the mayor.”

Tramontozzi’s attorney, Jack McGlone, said the dispute was a “ridiculous argument” that never should have resulted in a criminal court hearing. McGlone said his client denies telling the officer he worked for the mayor, but may have mentioned he was on city business.

Regardless, the attorney said both men apologized, shook hands, and agreed to put the dispute behind them at a court hearing in September. MBTA records say the clerk dismissed the case after Tramontozzi apologized.

Court guidelines and a Supreme Judicial Court ruling say clerks’ hearings should generally be held in private to protect people’s reputations from potentially baseless charges. But the guidelines recommend clerks make exceptions in high-profile cases to avoid undermining faith in the court system, especially when clerks decide not to issue charges.

“In such cases, the public may question whether justice has been done behind the closed doors of the hearing room,” the guidelines note, citing a past court decision.

But Tobin, the longtime Quincy clerk magistrate, said he never releases files unless his office decides to issue criminal charges.

“My only desire is to protect the reputations of individuals and their families,” said Tobin, who served as a Quincy mayor and lawmaker in both houses of the state legislature prior to becoming clerk in 1982.

A court spokeswoman said Tobin “exercised his discretion” to withhold the files.

But critics of the confidential nature of these hearings say that the criminal justice system depends on transparency, particularly to guard against unequal treatment.

“We live in a society where the public expects most court hearings to be open,” said Robert Ambrogi, a media attorney and executive director of the Massachusetts Newspaper Publishers Association.

Many court officials and criminal justice advocates say the clerk-magistrate hearings are an important tool to deal with minor crimes or help first-time offenders avoid having a criminal record. But critics say the Spotlight report raised important concerns about the fairness of the process and potential abuses.

The Globe also found 1 in 8 of the charges considered at hearings in the second half of 2017 were felonies, including attempted murder, rape, and arson.

And officials from Mothers Against Drunk Driving, a national advocacy group, told the Globe they were alarmed to learn that clerks could dismiss drunken driving cases at private hearings in Massachusetts without any public oversight.

“This sounds crazy,” said J.T. Griffin, chief government affairs officer for MADD. “We’ve never heard of any state that does anything like that.”