A third Massachusetts State Police trooper has pleaded guilty in federal court to embezzlement in connection with overtime abuse at the agency, prosecutors said.

Gary Herman pleaded guilty Thursday to one count of embezzlement from an agency receiving federal funds, the US attorney’s office said in a statement.

Herman is the third trooper to plead guilty as a result of the ongoing federal probe into overtime fraud at the agency. Three more troopers have been charged in connection with that investigation.

Herman is slated to be sentenced on Jan. 17. Federal prosecutors will recommend a sentence of between six months and a year behind bars, according to the attorney’s office.

Prosecutors said Herman was paid for overtime shifts that he did not work at all or from which he left early. All told, Herman collected $12,468 in bogus overtime in 2016, authorities said. 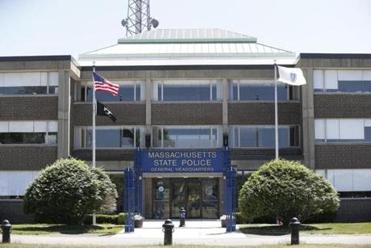 The department sought to destroy boxes filled with potential evidence in the department’s ongoing internal audit, as well as federal and state criminal probes, into alleged overtime fraud.

In a statement, State Police spokesman David Procopio said Herman has been “suspended without pay since our audit uncovered the overtime fraud he committed.”

“Now that the guilty plea has been finalized the agency will move forward with termination,” said Procopio.

According to authorities, Herman concealed his overtime abuse by filing fake citations to make it look like he had worked overtime hours he had not. Specifically, investigators said Herman, a 45-year-old Chester resident, fabricated citations on multiple occasions by copying driver information from citations he had issued months earlier in order to be paid for bogus overtime. He also wrongly claimed in State Police documents that he had worked the entirety of his overtime shifts when he had not, according to the attorney’s office.

Herman was assigned to Troop E, which was responsible for patrolling the Massachusetts Turnpike before it was disbanded this spring as a result of the overtime scandal. In 2016, Herman earned $227,826, which included more than $63,000 in overtime pay, according to the attorney’s office.

The bogus overtime in question involved two State Police programs that were intended to reduce crashes on the Pike through “an enhanced presence” of troopers who were instructed to target vehicles that were speeding, according to the attorney’s office.