Cardinal Sean P. O’Malley said Thursday he is expanding a review of sexual misconduct allegations to include all three seminaries in the Archdiocese of Boston and has hired a former US attorney to lead the investigation.

In a statement, O’Malley said the review he ordered in August of allegations of sexual misconduct at Saint John’s Seminary in Brighton would be broadened to include Pope St. John XXIII National Seminary in Weston and Redemptoris Mater Seminary in Brookline.

O’Malley said he was including the other seminaries to meet “the generally expected levels of transparency and accountability.”

In addition, O’Malley said he had hired former US attorney Donald K. Stern to lead the review, along with investigators from Stern’s firm, Yurko, Salvesen & Remz.

The review was prompted by allegations from former seminarians who have described a climate of heavy drinking, sexual harassment, bullying, and intimidation at St. John’s, a 134-year-old institution that is home to 87 candidates for the priesthood. 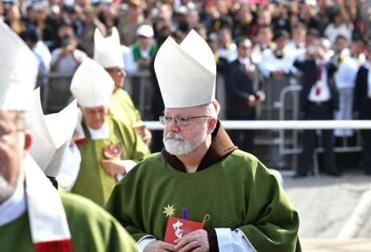 Read the full statement from Cardinal Sean O’Malley on expanding a review of sexual misconduct allegations at a Brighton seminary to include two other seminaries.

The hiring of outside counsel came after Attorney General Maura Healey and others criticized the archdiocese for initially appointing a group to review St. John’s Seminary that included two members of the seminary board and a former member of the faculty.

Asked for comment Thursday, Healey’s office referred back to the statement she released about the matter last month.

“Whether involving a business, a sports program or a school, allegations of this nature need to be taken seriously and require a thorough investigation without conflicts of interest,” the statement said. “The inquiry into St. John’s Seminary must have the independence and expertise needed to perform a legitimate review.”

In his statement, O’Malley acknowledged that “each member of the original committee has connections or ties to St. John’s Seminary and that given the current challenges of confidence in Church leadership and institutions, the people of the Church, and our civic community, there may have been concerns regarding the objectivity and completeness of the committee’s findings.”

Yurko, Salvesen & Remz, O’Malley wrote, “does not have an existing relationship with any of the seminaries or the Archdiocese of Boston.”

But victims’ advocates and others who track the sexual abuse crisis still questioned the credibility of the review, noting that Stern will be paid by the archdiocese.

“Since the expanded review is not truly independent, many victims feel that the investigation will not be fair, transparent, and unbiased,” said Mitchell Garabedian, an attorney who has represented many victims of clergy abuse.

“Many victims also feel re-victimized by the expanded investigation because they feel it’s just a publicity stunt by the archdiocese,” Garabedian said. “The archdiocese is incapable of being investigated by an entity it has hired to investigate itself.”

Anne Barrett Doyle, codirector of BishopAccountability.org, which tracks abuse allegations against church leaders, also expressed concern that a law firm hired by the archdiocese will conduct the review.

“What we’ve seen in diocese after diocese is that these internal inquiries are often containment tactics in disguise, and we only get information about perpetrators and crimes when outside prosecutors do an investigation,” she said.

O’Malley said he was committed to releasing a report on the seminaries “that addresses any issues arising from the review and [identifies] steps that we will take to remediate any identified problems.”

The cardinal first disclosed the St. John’s allegations in August, when he announced that two former seminarians had posted accounts on social media of witnessing and experiencing “activities which are directly contrary to the moral standards and requirements of formation for the Catholic priesthood.”

In one account, John Monaco, who has identified himself as a former St. John’s seminarian, recalled seminarians receiving “creepy messages” sent by another seminarian looking to “hook up.”

“When it was brought forward to both priests in the seminary and outside it, the response was appalling — the recipient was told that ‘It’s not like he sent you pictures of his penis, don’t over-exaggerate and act like a victim,’ ” Monaco wrote.

He has also described priests on faculty who would “get drunk with their ‘clique’ of seminarians, and would invite them into their rooms late at night for ‘private parties,’ ” as well as Latin American seminarians who were the targets of racial slurs.

Asked for comment Thursday, Monaco pointed to a letter to O’Malley posted online in August in which he urges others who experienced misconduct at Saint John’s to come forward “so that additional light may shine on the darkness that has been hidden.”

The review comes as the Catholic Church is contending with a fresh wave of sexual abuse scandals, 16 years after the clergy abuse crisis prompted American prelates to adopt a zero-tolerance policy toward the sexual abuse of minors.

In August, a Pennsylvania grand jury report described the abuse of more than 1,000 children by 300 priests dating back decades, as well as a “systematic cover-up” by church leaders. In July, Cardinal Theodore E. McCarrick, the former archbishop of Washington, resigned amid allegations that he sexually abused minors and adult seminarians.

Earlier this year, O’Malley, who leads a Vatican advisory panel on clergy abuse, apologized for the way his office handled a 2015 letter from a New York priest alleging sexual abuse by McCarrick. O’Malley’s secretary did not deliver the letter to O’Malley at the time, on the grounds that the Vatican panel O’Malley chairs is not empowered to deal with individual complaints.

The Boston Archdiocese later announced that O’Malley would review all letters about abuse that come to his office, “even if they address matters outside his authority.”

On Thursday, O’Malley urged anyone with information about the three seminaries to contact Stern’s firm via e-mail at dsalvesen@bizlit.com or by phone at 617-723-6900.

Material from the New York Times and Associated Press was used in this report. Globe Staffers Mark Arsenault and Brian MacQuarrie also contributed. Levenson can be reached at michael.levenson@globe.com.
Loading comments...
Most Popular in metro
Real journalists. Real journalism. Subscribe to The Boston Globe today.