“That’s not really the way we would like our society to figure itself out,” he said, tongue clearly in cheek. “It would be nice if it figured itself out in a more self-adaptive way.”

Ito gave the opening keynote Monday at the Change Maker Conference, a two-day event on City Hall Plaza anchoring HUBweek Monday and Tuesday. HUBweek organizers — drawing a mix of entrepreneurs, academics, artists, and activists — see the conference as a way to build connections between people from various fields with one broad goal: change.

While HUBweek, founded by The Boston Globe, Harvard University, Massachusetts General Hospital, and MIT, is marking its fourth year, this is the first year for the Change Maker Conference.

“Over the four years, what we have learned is that there is a community of people in this city and a community of people who come to this city who are trying to change the world,” Brendan Ryan, HUBweek’s executive director, said Monday. “If I could summarize what unites all of us . . . that’s how people here define their work.” 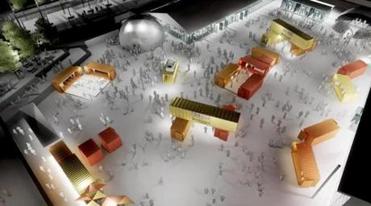 Everything you need to know about HUBweek 2018

Now in its fourth year, the HUBweek festival brings together hundreds of events, installations, and conversations on art, science, health, and technology.

Ito’s talk centered on complex systems that adapt to major changes. But he said the world must change its outlook from one centered on convenience and wealth if it wants to address the “elements of our world that are screwed up.”

“You can change all the rules you want. You can try to get companies to behave carefully by changing regulations,” he said. “But you’re not going to fundamentally change the outcome unless you change the goals.”

Ito was followed on stage by Dr. Helen Riess of Massachusetts General Hospital, who called for increased empathy both in the medical field and between people of different backgrounds and cultures.

Other speakers scheduled for Monday and Tuesday range from doctors to dancers, from venture capitalists to Rachael Rollins, who won the Democratic primary for Suffolk County district attorney promising to reform the criminal justice system.

The diversity of speakers was a selling point to Dennis Jones, a cancer researcher at Boston University who attended the conference Monday with no specific agenda in mind. Instead, he said, he just hoped to learn something he didn’t know before.

“I think there’s something here for everyone,” he said. “I didn’t check any [specific topic] off my list. I’m interested in all the speeches.”

Others sought professional inspiration, such as Lizzi Ross, associate director of the executive education program at the Rhode Island School of Design. She hoped the conference would help her come up with ideas for the program by giving her a better “understanding of the process by which new initiatives are developed.”

While many HUBweek events are free, others require a paid pass. And the Change Maker Conference required a separate registration.

HUBweek organizers expect more than 50,000 people to take part in the week’s festivities, which continue through Oct. 14. On Monday morning, more than 100 people gathered for the Change Maker Conference; other events happening this week across Boston and Cambridge include presentations, exhibits, hackathons, films, and art exhibits.