Boston received yet another jab for its complicated history with race during a “Saturday Night Live” sketch spoofing a neo-Confederate community meeting.

The skit, which was one of the last sketches on this weekend’s show, opens on a “League of the South” meeting, where a group of white nationalists are going over recent announcements: Deb is selling neo-Confederate blankets (all proceeds go to the troops), participants of the group’s fantasy football league can, after much deliberation, choose black athletes, and — the hottest topic of the meeting — the organization is planning to leave the south. After all, they say, the minorities and immigrants just keep pouring in.

“It’s been over a year since we neo-Confederates marched on Charlottesville, and things haven’t gotten better,” says Jim, one of the League of the South leaders, played by “SNL” cast member Beck Bennett. “More foreigners coming in, more strangers who don’t respect our way of life. We’re losing our culture, and I will not sit quietly.”

The League of the South must make a home somewhere else, ideally “an agrarian community where everyone lives in harmony, because every single person is white,” Jim says.

While the rest of the group, a mass of denim and flannel, nods and murmurs approvingly, one member, played by Adam Driver — who recently starred in Spike Lee’s “BlacKkKlansman” — raises his hand. 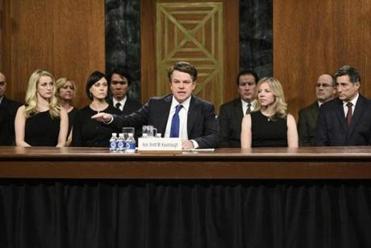 Damon’s appearance was the on-screen highlight of the show’s season opener.

“Yeah, I know that place,” he says. “That sounds like Vermont.”

No, the League of the South leader says. The place to which he’s referring is a land “purely full of Caucasians, where even the folks who wash the dishes and pick the fruit are white.”

That’s still Vermont, Driver insists. A few other group members later chime in, agreeing that Vermont is a place where dogs wear bandanas, folks eat pancakes on their porch and wave to passersby, and “the leaves change color but the people don’t.” There are farmers markets, country stores, and spiced apple compote.

It’s a Caucasian paradise, one member exclaims, and the group cheers.

The leader continues to disagree with Driver, unwilling to relocate his organization to the northeast. He skeptically asks Driver if he’s new around here, and Driver tells the group he’s actually originally from the north.

The other members immediately begin to protest, but Driver puts his hands up in defense: “Don’t worry, I’m from Boston,” he says, and the white nationalist group breathes a sigh of relief.

This isn’t the first time an “SNL” skit has mentioned Boston’s apparent racist reputation. In 2017, “SNL” host Michael Che referred to Boston as “the most racist city he’s ever been to” in a segment about the Patriots-Falcons Super Bowl game. Angry comments from Bostonians ignited social media.

In December 2017, the Globe also drew attention to Boston’s racist reputation with its seven-part Spotlight series, which investigated the deep-seeded discomfort many people of color feel in the city.

Many people took to Twitter following this weekend’s “SNL” skit. Some were frustrated that Boston was being knocked yet again, while others applauded the shade.

Idk if I can forgive Adam for throwing Boston under the bus just now, considering there are places up North that did vote for Trump and it definitely wasn't Boston lol #SNL

Let me guess, Michael Che wrote the joke in that sketch about Boston being racist. #SNL pic.twitter.com/Zj6YqkzMc7

That Boston shade tho! All them facts #SNL

That Boston joke is very accurate. I feared for my life when I spent a month there. #SNL