Michelle Obama is coming to Boston in November, with tickets for the “intimate conversation” at TD Garden set to go on sale to the public Friday morning — and the former first lady’s event is shaping up to be the next must-see show in town.

Presale tickets for the arena event hit TD Garden’s website Thursday, and some already appeared to be popping up on the resale market, with many tickets costing upwards of $100. And Obama announced Thursday that she has added two additional shows — repeats in New York City and Washington, D.C. — to her 10-city book tour due to the demand. (Presale tickets were offered to those who registered for the Ticketmaster Verified Fan program by Tuesday, Sept. 18).

Truly humbled by the response to my upcoming book tour. I can?t wait to share BECOMING with all of you & hope to see you somewhere along the way! pic.twitter.com/uT7im9hnFk

Tickets for the event — which comes to Boston on Saturday, Nov. 24, and begins at 8 p.m. — are reportedly expected to start around $30. However, they can range up to nearly $3,000 in Boston for a VIP meet-and-greet package, according to the Garden’s website.

The tour name — “Becoming: An Intimate Conversation with Michelle Obama” — seems a bit oxymoronic, considering TD Garden is a 19,600-seat arena. But the event does aim to feature “intimate and honest conversations” between Obama and to-be-announced moderators, according to a statement from Live Nation. During the show, Obama is expected to reflect on the experiences that have shaped her life, from childhood to her professional career to her years spent in the White House.

“I’ve spent the last year and a half reflecting on my story as deeply and honestly as I could, and now I’m thrilled to travel the country and do the same with readers this fall,” Obama said in the statement released by Live Nation. “I hope that this tour will inspire others to reflect upon and share their own stories — all the joys and sorrows, all the scars and renewals — so that together, we can better recognize that each of us, in our own way, is in a constant process of becoming.”

I?m done with my book! I?ve learned a lot about myself and I?d like to share my story of BECOMING?the plainness, the blemishes, the crazy turns?with you on my book tour, beginning 11/13 in Chicago. Go to https://t.co/dVXmPri4OS to find out how to get tickets. #IAmBecoming pic.twitter.com/jmlbh19RXG 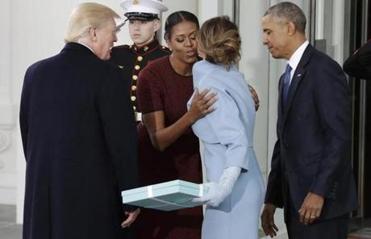 Michelle Obama opened up to Ellen DeGeneres about why she seemed so awkward when Melania Trump gave her a gift before President Trump’s inauguration.

Obama’s book, “Becoming,” will be released Nov. 13 in the United States and Canada by the Crown Publishing Group, a division of Penguin Random House. It will also be translated into 28 different languages, and an audiobook read by Obama herself will be simultaneously released.

Obama’s book might serve as a revelation to her fans. She has given few details about her time in the White House, and her only other book — ‘‘American Grown,’’ released in 2012 — is about food and gardening. (Memoirs by former first ladies usually sell well, with notable works including Laura Bush’s ‘‘Spoken from the Heart’’ and Hillary Clinton’s ‘‘Living History.’’)

The former first lady and her husband, former president Barack Obama, both inked book deals with Penguin Random House in 2017. The deal is believed to be well in excess of $30 million. The Obamas planned to donate a ‘‘significant portion’’ of their author proceeds to charity, including to the Obama Foundation.

Obama and Live Nation will also be donating 10 percent of every show’s tickets to various charities, schools, and community groups in each city the tour visits, giving those fans free admission. As of Thursday, it was not clear which Boston groups would receive such tickets.

Not much is yet known about the former president’s upcoming book, though he is expected to focus on his eight years in the White House.

Material from the Associated Press was used in this report.
Loading comments...
Most Popular in metro
Real journalists. Real journalism. Subscribe to The Boston Globe today.