Financial conditions are deteriorating at many of New England’s quintessential small private colleges, with tuition revenue failing to keep up with expenses at more than half of the schools, a Globe review shows.

The review of federal data found a number of financial warning signs at many of the schools, which have become increasingly reliant on tuition, even as enrollment has declined.

These findings echo a national trend. Two reports issued recently by national credit rating agencies forecast more troubles for small schools as the gap between their revenue and expenses widens. Moody’s found in July that one in five small private colleges nationwide is under fundamental stress. It predicted more are likely to close or merge in the coming years.

“It’s not that the expenses are going up; it’s really that the revenue is going down,” said Susan Stuebner, president of Colby-Sawyer College in New Hampshire. 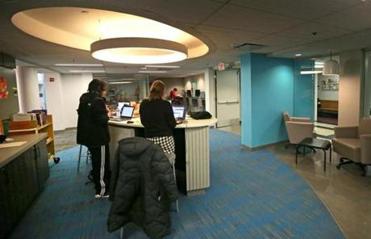 The main reason these schools struggle is demographic. The number of high school graduates has been shrinking — and will continue to.

At some schools, the number of tuition-paying students has shrunk dramatically. In some cases, schools have offered deep discounts to attract more students. And at many schools, it’s been simply unreasonable to raise tuition high enough to keep pace with costs.

These trends affect colleges across the nation but are especially worrisome for New England, a region where small private colleges for centuries have been part of the local economy and culture of many communities.

The Globe analyzed the 75 New England colleges with more than 100 students but less than $100 million in total expenses for the years 2012 and 2016, the most recent data available from the federal government.

Slightly more than half the schools saw a drop in enrollment between 2012 and 2016, with 18 schools losing 20 percent or more of their students.

Tuition made up 70 percent or more of revenue for 63 colleges. By contrast, Harvard University last year received 21 percent of its revenue from tuition. It received 36 percent from endowment returns.

And for 48 of the 75 small New England schools, tuition covered less of the school’s expenses in 2016 than it did five years prior, the data show. For a few, it dropped by 25 percent or more.

Several schools, including the College of St. Joseph, appear at the top of all these categories, according to the Globe’s review, with a large drop in students, high tuition dependency, and a widening gap between tuition revenue and expenses.

Still, many of the colleges with the worst financial problems are in other parts of the country. Seminaries and other religious schools — none of them in New England — have some of the fastest-growing gaps between tuition revenue and expenses, data show.

Even amid the increasing financial pressures, only 11 closed nationwide last year, according to Moody’s, up from three in 2012. But Moody’s predicts more schools will close, even though it estimates the rate of closures will remain below 1 percent.

In Massachusetts, concern about the fate of small private colleges took on new urgency this spring after Mount Ida College, a small liberal arts school in Newton, closed abruptly. State regulators and elected officials have called for better oversight and more publicly available data about these schools and their financial status to avoid another such crisis, which left many students stranded.

But colleges are pushing back against the notion that they won’t be able to survive. They say they have weathered financial trouble in the past and have no intention of closing their doors.

“Wordsworth the poet talks about ‘the past is prelude,’ ” said Kevin Quigley, president of Marlboro College in Vermont, which has a structural deficit of about $4 million out of a $15 million budget. “The college has dealt with these challenges in the past, and I’m confident in our community.”

Many schools are restructuring their curriculum to attract students. Colby-Sawyer recently eliminated its English and philosophy majors in an attempt to shift toward majors like nursing and business that students see as more likely to guarantee them a job.

Some small schools have found a niche they say will breed long-term success. Sterling College, in northern Vermont, has only about 130 students but increased its enrollment considerably in recent years. President Matthew Derr said the school will be successful because it specializes in farming, the environment, and sustainability, subjects that appeal to many young people today. But even it is looking for new revenue streams, through a continuing education program.

“Resilience is in the DNA,” Derr said.

After Mount Ida’s closure, which came as a surprise to state regulators because the college did not notify the Department of Higher Education as required, officials have begun to explore the idea of requiring schools to notify the state sooner if they are in financial hot water.

But colleges say if the public knows a school is struggling, it could make failure a self-fulfilling prophecy.

“There are lots of examples of schools who have gone through, in the past, challenging times and with really strong leadership . . . have emerged stronger and better and healthier than ever,” said Richard Doherty, president of an association that lobbies on behalf of private colleges in Massachusetts.

But some experts say that determination to stay in business hurts the sector overall. If some colleges close, it might make it easier for the rest to survive.

“Part of that tenacity of small colleges means that they hold on, they get some donor support, some draw from their endowment . . . so that actually builds pressure,” said Dennis Gephardt, vice president and senior credit officer at Moody’s Analytics.

Gephardt authored the report that predicts the closure rate of private colleges will increase. The report also predicted an increase in mergers, although they are often difficult to execute. In 2015, Salem State University explored a merger with Montserrat College of Art but ultimately decided against it. Before it closed, Mount Ida explored a merger with Lasell College that was also unsuccessful.

A separate report from Moody’s last week offered a bit of good news, but said it won’t be enough to reverse the industry’s negative outlook. It found that growth in federal research funding plus favorable investment returns have helped colleges and philanthropy.

Fitch Ratings also issued a similar report last week. It noted ways that schools are trying to generate revenue, such as online classes and partnerships with other universities. Some schools are also experimenting with alternative pricing structures, like fixed tuition prices for four years, or free tuition the last semester if a student graduates in four years.

At College of St. Joseph in Vermont, administrators are trying many of these options, even though the school relies on tuition for nearly all its revenue. The college, however, could be in trouble. It was one of three schools recently flagged by the regional accrediting agency for potentially no longer meeting part or all of the nine requirements for accreditation, which include financial standards. College of St. Joseph, along with Lincoln College of New England in Connecticut, and Newbury College in Brookline, presented before the accreditors in late June evidence of why they should not be placed on probation.

A spokeswoman for the College of St. Joseph declined to make the president available for an interview.

The commission’s decisions will be announced soon, said Barbara Brittingham, president of the Commission on Institutions of Higher Education at the New England Association of Schools and Colleges.

Probation can last no longer than two years. After that, a school’s accreditation will be revoked or reinstated. Brittingham said the commission at its June retreat reexamined what happened at Mount Ida, which it had just reviewed before the abrupt closure, to see if it can do a better job of flagging schools in trouble.

“I think they have done a good job. I think the commission wants to see how they can do an even better job,” said Brittingham.

Meanwhile, the state Department of Higher Education working group is putting together a body of research to determine whether Mount Ida was a unique situation or part of a larger trend.

Board of Higher Education chairman Chris Gabrieli said the group is trying to balance respect for private institutions with its duty as regulators to ensure that families are warned and protected.

He said it would not be surprising if some schools did close.

“There are few fields in which sometimes institutions don’t have to close,” he said. “In business, in health care, there are hospitals that have closed or consolidated, even as health care needs have expanded. This would be an unnatural field if there were only new and forever-surviving institutions.”

At Southern Vermont College, a liberal arts school in Bennington, president David Evans is working to cultivate additional philanthropy and hopes to create a more extensive partnership with local health care institutions in southern Vermont. He wants to attract more local students and expand recruitment on the West Coast.

“It’s possible,” Evans said. “It’s something that you know every college president thinks about and worries about. I don’t see it in the immediate future but . . . who knows what the next curveball will be?” he said.