Harvard University’s president, Drew Faust, said that the reported incident in which a police officer repeatedly struck a black Harvard student while he was pinned down on Friday was “profoundly disturbing” and “upsetting.”

Faust’s e-mail, which was sent Monday to members of the Harvard community, comes after Cambridge police on Sunday released a seven-minute video shot by a bystander that showed the encounter between officers and Selorm Ohene, 21, of Cambridge, on Friday night.

Ohene was pinned to the ground as he was arrested near the corner of Massachusetts Avenue and Waterhouse Street, according to a police report. Ohene was naked and a woman who appeared to be Ohene’s acquaintance told officers he may have been on drugs, the report stated.

In her letter to Harvard students and faculty, Faust said the university has been in touch with the city about the incident.

“Over the coming days, we will be seeking to determine what Harvard, as an institution, can learn from the incident,” she wrote. 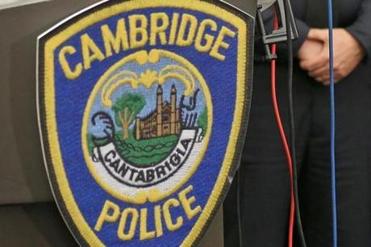 Cambridge police released a seven-minute video that shows the encounter, which has been described as “disturbing” by the city’s mayor.

“Cambridge affirms that Black Lives Matter, but it must be true in practice as well,” McGovern said.

Cambridge police are conducting an internal review on the matter.

Read the full statement that Harvard President Drew Faust e-mailed to members of the school’s community on Monday:

“Dear Members of the Harvard Community,

Many of you have heard about an incident that occurred Friday night on Massachusetts Avenue, involving interactions between the Cambridge Police Department and a Harvard student in an extreme condition, including his forcible arrest. We do not yet know all the facts, and it will take time before the necessary reviews have been completed and we have a fuller understanding of events leading up to the incident and the incident itself. But what we do know raises important issues about the relationship between police and the communities they serve, student health resources, and the manner in which University units operate with each other and with our partners in the community.

The events of Friday night are profoundly disturbing. A Harvard student was in obvious distress, and we need to understand how that came to be and whether we could have interceded earlier and more effectively. We have been witness to the use of force against a member of our community, which, regardless of circumstances, is upsetting and compels the search for a deeper understanding. The arrest occurred against the backdrop of increasingly urgent questions about race and policing in the United States, and about racial differentials in health care, raising for members of our community appropriate anxieties—about their own safety and place in our society, about that of their friends and colleagues, and about the world outside our gates.

Over the coming days, we will be seeking to determine what Harvard, as an institution, can learn from the incident. We have already engaged with the City of Cambridge to ensure that we understand its perspective, and we look forward to learning about the results of its reviews. We will work with City officials to address concerns members of our community have raised about interactions with the Cambridge Police Department. We will be asking questions of ourselves, recognizing that the responsibility rests with the University to establish the conditions of trust necessary for effective campus policing and the delivery and coordination of effective health care. This work will and must include hearing directly from students, faculty, and staff about their experiences, concerns, and ideas.

Ultimately, this is about building a community where people from all backgrounds and life experiences can come together confident in their ability to do their best work in a safe, supportive, and constructive environment. As the society outside our gates is riven by increasingly stark divisions and distrust, it is work that takes on a special urgency—and it is with that urgency that the University will proceed.