Cambridge’s mayor called a video of a police officer repeatedly striking a black Harvard University student while he was pinned to the ground by fellow officers “disturbing” and promised that the findings of an internal probe would be made public.

“Cambridge affirms that Black Lives Matter, but it must be true in practice as well,” Mayor Marc C. McGovern said in a statement Sunday morning.

Later in the day, Cambridge police released a seven-minute video that showed the encounter between officers and Selorm Ohene, 21, of Cambridge, on Friday night.

Three Cambridge officers and an MBTA Transit Police officer pinned Ohene to the ground while arresting him near the corner of Massachusetts Avenue and Waterhouse Street, according to a police report. Ohene was naked and a woman who appeared to be Ohene’s acquaintance told officers he may have been on drugs, the report stated.

In the video, shot by a bystander and released by police, Ohene is standing on the median of Massachusetts Avenue, surrounded by three officers, then turns and approaches one of them. 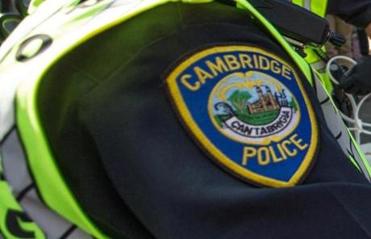 Cambridge officers and a transit officer grabbed the legs of a 21-year-old Harvard student, who was naked on Massachusetts Avenue, police said.

An officer grabs Ohene’s legs from behind, knocking him forward into another officer. The three men fall to the pavement. The third officer helps pin Ohene to the ground.

Ohene can be heard on the video yelling, “Help me, Jesus! Help me, Jesus!” as he struggles with the officers. A fourth officer helps restrain Ohene, and one of the officers can be seen striking Ohene once, according to video released by police.

In a separate video of the incident, filmed from the opposite side of the street and obtained by the Globe Saturday night, an officer can be seen striking Ohene quickly four times while another officer grips the first officer’s belt.

Ohene was charged with indecent exposure, disorderly conduct, assault, resisting arrest, and assault and battery on ambulance personnel, police said. An arraignment date hasn’t been scheduled, according to a spokeswoman for the Middlesex district attorney’s office.

The mayor viewed a video clip of Ohene’s arrest that was posted on social media, a spokesman for the mayor said.

“What is shown on the video is disturbing,” McGovern said. “When confrontations cannot be averted and include the use of physical force, we must be willing to review our actions to ensure that our police officers are providing the highest level of safety for all.”

City Councilor Sumbul Siddiqui also called the video disturbing and questioned whether punching is an acceptable use of force by officers.

“I think when you see the video and you see the officer punch the individual after he’s subdued, you think, ‘What kind of protocol was that?’ ” Siddiqui said during a telephone interview Sunday.

Police said they told Ohene they were “only there to help him and were concerned for his safety,” according to the police report. Police said Ohene became “aggressive, hostile, and intimidating” and approached officers with clenched fists, prompting them to take him to the ground.

During the arrest, an officer struck Ohene five times in the torso, according to the police report.

Cambridge Police Commissioner Branville G. Bard told city councilors in a statement Saturday that police used their discretion and struck Ohene to “gain his compliance and place him in handcuffs.”

Jeremy Warnick, a spokesman for Cambridge police, said in an e-mail Sunday that the department is committed to a “thorough and complete” review.

While Ohene was being transported to a local hospital for observation, he spat blood and saliva at an EMT, police said in a separate statement Saturday. Two Cambridge officers were also treated for minor injuries and unprotected exposure to bodily fluids, police said.

Ohene’s arrest occurred in view of about 30 people, according to police.

Members of the Harvard Black Law Students Association witnessed Ohene’s confrontation with police, and on Saturday, the group issued a statement calling it “a brutal instance of police violence” and demanded that officers involved “be investigated and held accountable.’

Daunasia Yancey, a Boston-based community activist in the Black Lives Matter movement, said in a phone interview that police generally use a greater level of force against African-Americans than against whites.

“It’s heartening for many people to hear the mayor say it’s ‘disturbing.’ But we also need to say it’s not okay,” said Yancey. “We need people and officials to just say it’s wrong.”

The Cambridge Police Department’s use of force policy, last updated in 2011, allows officers to “use only that degree of force which is reasonably necessary” to make an arrest, place someone in protective custody, bring an incident under control, or protect the lives of themselves or others.

John Hilliard can be reached at john.hilliard@globe.com
Loading comments...
Most Popular in metro
Real journalists. Real journalism. Subscribe to The Boston Globe today.