Once upon a time in Massachusetts, students looking for an affordable path to a college degree turned to the state’s public colleges and universities.

But that option is becoming increasingly pricey for students and their families and forcing more of them to borrow ever larger sums of money to graduate, undermining a long-held reputation of public colleges and universities as the cheaper alternative for the middle class.

Between 2004 and 2016, the average student loan debt for graduates of Massachusetts’ public four-year colleges and universities rose by 77 percent, faster than in any other state in the country except Delaware, according to a report released Thursday by the Massachusetts Budget and Policy Center, a left-leaning research group that advocates for more state funding for higher education.

Deep cuts in scholarships, reductions in state funding, and increases in tuition and fees have shifted more of the burden of paying for college to students and their families, the report says.

Graduates of the University of Massachusetts system and state universities now leave with about $30,250 in debt, just 7 percent less than the $32,355 of debt held by graduates of private colleges in Massachusetts. 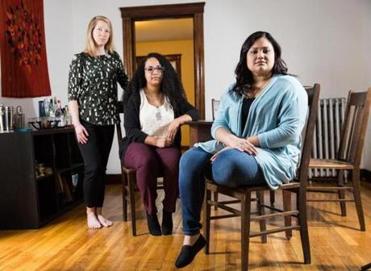 The college debt crisis is even worse than you think

We tell students they need a bachelor’s degree to get ahead. But for too many, the numbers no longer add up.

In 2004, public university graduates in Massachusetts borrowed 28 percent less, with average loans of $17,130, while their peers in private schools took on $23,800 in debt.

“We don’t have in Massachusetts an affordable school that students can call a financial safety school,” said Bob Giannino, the chief executive officer for UAspire, a Boston-based organization that counsels students on college affordability. Many students have to borrow the maximum amount in federal student loans to attend public universities in Massachusetts, he said.

“We used to say, ‘A state college is always affordable,’ ” Giannino said. “Now it’s more nuanced. There were places to more easily steer students; there are few to none for vast numbers of students now.”

The sticker price for public universities remains lower than that of private institutions. For example, a year of tuition, room, board, and fees at Fitchburg State University costs about $20,713. At the University of Massachusetts Lowell it costs $27,300. And at private Merrimack College it costs $55,400.

But higher education experts said many private colleges have endowments and can offer more in scholarships and discounts to offset their tuition costs. Private schools also attract more higher-income students and families who can pay more of the price out-of-pocket without tapping federal loans.

Public universities tend to draw lower-income students, who have to take out larger student loans to afford the tuition, fees, and room and board. Many may face financial pressures to also work while taking classes, extending their time in college, and the ultimate bill.

Furthermore, in Massachusetts, the cost of a public college education has shifted from state budgets to parent and student pocketbooks, said Noah Berger, president of the Massachusetts Budget and Policy Center.

State higher education funding has fallen by 14 percent since 2001, from $1.4 billion to $1.2 billion in 2018, when adjusted for inflation, even as enrollment has increased, the report says.

A college education is even more crucial in Massachusetts than in other states, because the economy relies on an educated workforce, and a bachelor’s degree can more than double a resident’s yearly income, Berger said.

‘We don’t have in Massachusetts an affordable school that students can call a financial safety school.’

Requiring students to borrow so much for a degree can deter them from stepping onto a college campus, which could endanger the state’s thriving economy, particularly since public university students tend to stay and work in Massachusetts, he said.

Jen Ford, who is finishing her final semester at Bridgewater State University, said she sometimes envies her friends who went to trade schools and are now working as electricians and truck drivers and are facing far less debt than her $40,000. She also wonders whether it would have been cheaper for her to attend community college first, then finish her final two years at a state university.

“I knew I was going to graduate with debt — it’s common knowledge,” Ford said. “As I get older and thinking about implications of debt, it’s different. It’s stressful.”

Ford, 25, said her loans aren’t enough to cover her entire cost of attending college, so she has also had to work part time — holding jobs as a campus organizer, in retail, and as a security officer at the college — to supplement her income in recent years.

She wants to attend law school but worries about adding to her debt, and is looking for options that will allow her to take out as few loans as possible for her advanced degree.

State officials said they recognize that college affordability is a stumbling block for many students and parents.

The reduction in state investment in higher education has hurt, said Marty Meehan, the president of the University of Massachusetts system.

“It’s fair to say we are a private university that receives a 20 percent subsidy from the state,” Meehan said.

But the value of the education students receive at UMass for their money is far superior to many small private colleges in Massachusetts, he said.

The UMass system expects to do more fund-raising to increase scholarships, is developing more and better paying internships with businesses so that students can earn money while in college, and is trying to find new sources of revenue to reduce tuition costs, Meehan said.

The budget calls for an additional $7 million to increase grants to needy community college students and to a program that provides financial incentives and rebates for students who earn their bachelor’s degree in 4½ years, he said.

CORRECTION: An earlier version of this story misstated the cost of the combined tuition, fees, room and board at Fitchburg State University.