Dzhokhar Tsarnaev’s arrest in the Boston Marathon bombing in 2013 left his closest friends from high school stunned and, for a time, disbelieving. Many could not shake their image of him as gentle-souled “Jahar.” In the days after his capture, many refused to bad-mouth him, and some even proclaimed his innocence with “Free Jahar” Twitter posts.

No more. As testimony in Tsarnaev’s trial nears, many of these same friends now use profanities to describe the hatred they feel for Tsarnaev. In the 22 months since the bombings, their loyalty has disappeared — along with their confidence that they can accurately assess other people, or ever really know anyone.

Another friend said his faith in his own instincts about people has been rattled.

“It makes me question how good a judge I am of someone’s character,” said Davin Zimble, who now attends Hampshire College. 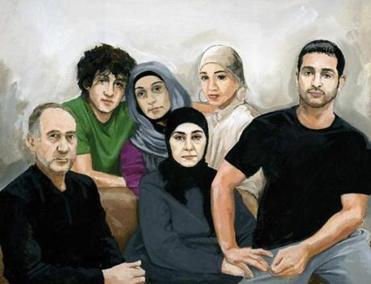 The fall of the house of Tsarnaev

A five-month Globe investigation of the two suspects in the Marathon bombings and their deeply dysfunctional family.

Ten of Tsarnaev’s longtime friends from Cambridge Rindge and Latin High School — most of whom stayed in close touch with him up until his arrest — recently agreed to speak to the Globe about how they have changed in the nearly two years since the bombing. Most wanted only their middle names published because of ongoing fears that any connection to the bombing defendant could hurt their future prospects at work or school.

Feelings of paranoia haunt them all, as most have been questioned by the FBI and have seen a number of friends pulled into criminal cases related to their friendship with Tsarnaev.

Many decided to speak only because a trusted fellow graduate of the Rindge class of 2011, Zolan Kanno-Youngs, who is now a Boston Globe correspondent, agreed to accompany them to an interview.

These friends come from the same public high school near Harvard Yard, whose 1,800 students represent a broad mix of ethnic and racial backgrounds. Being a Rindge student was a great equalizer, and they bonded over endless hours playing video games and pick-up basketball. They called each other by nicknames in their many rides in Tsarnaev’s green Honda Civic. They took pride that they could tell apart the identical twins in their group, with their nearly identical names, Stephen and Steven Silva, both of whom worked as Harvard pool lifeguards with Tsarnaev.

Looking back, these friends said their allegiance to — and affection for — Tsarnaev changed gradually over time. Those who once believed Tsarnaev, the school’s former wrestling team captain, was framed by the FBI have now opened their minds to the government’s evidence. They say they have now absorbed the full magnitude of the death and destruction allegedly caused by Tsarnaev and his older brother, Tamerlan, who died in a shootout with police.

“I can’t forgive him for what he did. He killed three people and injured hundreds of others,” said a friend, who asked to be referred to by his middle name, Junior, and who now works as a security guard. “My heart toward him is ice cold.”

They acknowledge that one source of their anger against Tsarnaev is that they blame him for the fact that two close friends are facing the possibility of federal prison time.

They are particularly sympathetic to Robel Phillipos, who many describe as “the nicest kid” from high school. Phillipos, 21, is expected to be sentenced this month for two counts of lying to federal agents when questioned about his whereabouts the night that the Tsarnaevs were on the run. Days later, he wept before FBI agents and told the truth, including that he was present in Tsarnaev’s dorm room when two college friends took incriminating items belonging to Tsarnaev.

The Cambridge friends say Phillipos was probably in a state of panic when he lied to investigators and believe he has since become the victim of overzealous prosecutors eager to look tough on terrorism.

‘I can’t forgive him for what he did. He killed three people and injured hundreds of others.’

Junior, a high school friend of Dzhokhar Tsarnaev, who asked to be referred to by his middle name

Phillipos faces up to eight years for each count of lying.

One friend, who is now a Boston University senior who also asked to be called by his middle name, Chris, said he could imagine himself reacting as Phillipos did. He recalled a night last month when he was at a pub, and a TV played a news report of Phillipos’s lawyers asking for a delay in his sentencing. All he could think of, he said, was “there but for the grace of God go I.”

“Robel’s facing prison time, and I’m having beers with friends,” he said.

To many of these friends, Tsarnaev is now viewed as a callous killer of innocent people, as well as a betrayer of friends. Though most of them oppose the death penalty in principle, some say they won’t lose sleep if he’s executed.

They say they had long thought Tsarnaev was one of them, someone who aspired to graduate from college and get a steady job, then later, perhaps marry and start a family.

Only in hindsight do they realize Tsarnaev’s dreams had changed, and that he harbored many secrets in his life, some relatively benign, others dangerous.

Tsarnaev had led many of them to believe that he was getting good grades at the University of Massachusetts Dartmouth, and had turned down attending Northeastern because it offered him less financial aid. He let it be known that he had become a significant pot dealer on campus. And Tsarnaev, as always, seemed intelligent and level-headed and rarely spoke about family problems or his relationship with his older brother.

They have since learned that Tsarnaev never got into Northeastern, and that he was failing most of his UMass classes. His parents had gotten divorced and left for Dagestan just before he started college. His brother had started to embrace a radical form of Islam.

Tsarnaev’s transformation was nearly impossible to detect, they say, though a closer reading of some of his Twitter messages has made some friends wonder whether there were signs they missed.

Chris recalled bumping into Tsarnaev in Cambridge three months before the bombing, and that his friend was particularly “reserved and quiet.”

Later that day, Tsarnaev posted on his Twitter page: “Cambridge got some real, genuinely good people but at the same time this city can be fake . . . ”

Chris wondered if that message showed hostility toward him — or his hometown. That same day, Tsarnaev also posted on Twitter: “I don’t argue with fools who say islam is terrorism it’s not worth a thing, let an idiot remain an idiot.”

This past summer, these friends learned that Tsarnaev allegedly had another disturbing secret, this one involving Stephen Silva.

They were shocked to learn through news reports that Silva was arrested for, among other things, providing a gun to Tsarnaev at some point in early 2013, and that this weapon was later identified as the one used to kill MIT Police Officer Sean Collier.

Many of these friends said they never knew Silva, known among them as impulsive and goofy, to be involved with guns. They also learned that Silva had been targeted in a drug-related sting operation. An undercover witness, who was paid more than $66,000 by federal authorities for his assistance, recorded conversations with Silva involving six heroin sales during three weeks last June.

Silva plead guilty in December to all of the charges, and has been held since his arrest. His lawyer has insisted that Silva had nothing to do with the bombing or its aftermath.

But the series of events blew away many of the Cambridge friends, and, while not defending his actions, they insist the federal indictments paint Silva as something he is not — a hardened criminal.

One friend, Junior, said he still wants to support Silva, one of his closest friends as someone “who knew me in and out.”

Specialists in federal criminal law say they expect that Silva will make an appearance in Tsarnaev’s trial. They say Silva’s plea likely means he is cooperating with the prosecution in Tsarnaev’s case — such as testifying that he gave the weapon to Tsarnaev — with hopes of a shorter sentence.

For his most serious charge, Silva faces a maximum 40-year prison term at a hearing set for next month.

That sentencing will be held at the federal courthouse overlooking the Boston Harbor — less than 5 miles from their high school alma mater, which produced the likes of actors Ben Affleck and Matt Damon as well as New York Knicks star Patrick Ewing. These friends say it’s surreal to think their high school is now known as the place that may have produced the Boston Marathon bomber.

They are considering writing letters to the judge on behalf of Phillipos or Silva, and perhaps showing up at their sentencing hearings. Some have visited or called Silva in prison, and some have been in touch with Phillipos, who is free on bail. None has attempted to see Tsarnaev, and they have no immediate plans to attend Tsarnaev’s trial, even as a curiosity.

For one of the friends, in particular, there is no way to escape thinking about these cases. Steven Silva, a Holyoke Community College student whose identical twin brother is set to be sentenced soon, said he lives in a swirl of anger, concern, and confusion and tries to support his brother by staying in touch with him in prison. As for Tsarnaev, his best friend before the bombing, Silva says he long ago stopped posting Twitter messages suggesting Tsarnaev had been framed by the FBI.

“I stopped believing in that,” he said. “I don’t doubt that he did it.”

Many of the Rindge friends are now looking for full-time work, their college graduations only months away. BU senior Chris had a job interview with a recruiter who noticed Cambridge Rindge and Latin on his resume, then asked: Did you know the bomber?

He has crafted a response to such questions, describing Tsarnaev as an acquaintance and quickly switching topics.

The friends say they have no desire to confront Tsarnaev, now or possibly ever. Many spoke about God being the final judge of him. But if they had to face him, some said they’d be curious to know: Why did you do it? And how long did you plan this? What was the tipping point?

One among them only wants to ask, “Do you have any part of your old self?”

Patricia Wen can be reached at patricia.wen@globe.com.
Loading comments...
Most Popular in metro
Real journalists. Real journalism. Subscribe to The Boston Globe today.