Anna Rostron saw the forest for the trees. Or rather, the trees through the house. They made this Milton home stand out from nearly 100 others Rostron and her husband, Edward Barker, looked at when they were house hunting outside the city.

“The light draws you straight through the house to the outdoors,” she says. “You feel like you’re in the trees.” A decade later, after multiple projects planned by Rostron, whose degree is in exhibition design and management, the 115-year-old house feels wholly connected to its setting.

Rostron and Barker, who are British and have two sons, Harrison, 12, and Archie, 10, have achieved their vision of a lush haven comparable to the gardens that are integral to family homes in England. Though Rostron had not mapped out the indoor-outdoor concept when they put in an offer, she knew they would expand the kitchen and enlarge the small, spindly back deck. “The deck is meant to be an extension of the kitchen,” she says. They also needed to rethink the steep, awkward backyard, then an unsatisfying mess with no access from the deck.

Before moving in, the couple embarked on a comprehensive renovation that included gutting the kitchen. Among other fixes, they opened it up to the dining room, raised the ceiling, and widened the sliding doors to the deck. They enlarged and rebuilt that deck and added a lower deck along with an adjacent patio, stairs to the yard, and retaining walls that created space for planting. “It was critical that the decks and the garden feel like a single entity,” Rostron says. “We wanted to see the kids while they played on the grass.”

In 2017, spurred by rotting wood and a desire to tweak the design, the homeowners hired D & E Construction to rebuild the decks using a low-maintenance composite material. To replace the space-hogging central staircase that connected the upper and lower levels, Rostron designed a spiral staircase that runs alongside the structure. “We gained about one-third more space on the lower deck and one-quarter more on the top,” she says. 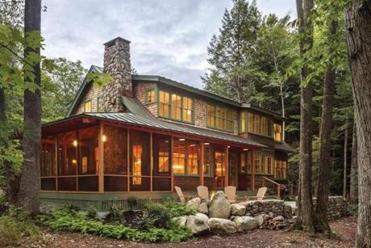 This family’s four-season home, close to grandparents, is inspired by turn-of-the-century waterfront camps.

The new decks have steel cable rails topped with tiger wood for a modern look, and walls made from horizontal tiger-wood slats for privacy. “Both decks feel much more like outdoor rooms now,” says Rostron.

Outfitted with a waterproof ceiling and ceiling fans, the lower deck is a place to get away from it all. “When you lie on the loungers, you feel completely isolated,” she says. It’s an equally ideal place for cocktails, thanks to the rustic bar that Rostron bought on Etsy as a birthday gift for her husband. The family eats dinner at the table on the upper deck when the weather allows. The whole setup makes the home a frequent spot for neighborhood gatherings.

Late last December, a pipe burst while Rostron was cooking dinner, wreaking havoc on the sun-splashed kitchen she had designed when they first bought the house. The disaster came just as they were completing the addition of a new butler’s pantry. The cabinets and tile in that space escaped ruin, but the main part of the kitchen had to be gutted and rebuilt — again.

Rostron maintained the look and layout. “Good design stands the test of time,” she says. The white cabinetry and statement zebrawood island, which was inspired by the original wood door next to the wall ovens, survived the overhaul. Refinements included adding radiant heat to the floor, installing more contemporary hardware, and choosing new backsplash tile to coordinate with the tile in the pantry.

One item remains on the to do list: rebuilding the old garage. After that, the home should be done. For now. Rostron says, “I love tearing things down and building them up again, knowing how hard I worked to make it my own.”