Mention Newport, Rhode Island, and visions of Gilded Age mansions and preppy yacht clubs may follow. Designer Desiree Burns doesn’t think that way. When she and her husband, Christian Burns, found a summer place outside the touristy downtown, she looked forward, not back. “It’s modern glam for the beach,” says Desiree Burns, who spent six years in Los Angeles as a jewelry designer before moving back East and into interior design.

Transforming the home was relatively easy because most of the fixes were cosmetic. “There were coastal blue walls, painted glass fixtures, and seashells everywhere,” Burns says. Playing off the plants outside, she picked a lush green velvet sofa for the living room as the starting point for her overall scheme. “We’re a young couple,” says Burns, 33. “We didn’t want to be too serious.”

The main seating area now anchors one end of the large living room, taking advantage of the floor-to-ceiling corner windows. A rug with a playful, fish-like pattern is a nod to the sea. A rounded concrete table meant for outdoor use balances the angular lines of the sofas and is a no-worry solution for drinks without coasters. Tree-stump side tables are equally forgiving.

At the other end of the space, Burns replaced built-in bookshelves with French doors that open to a new bi-level back deck built around a large oak tree. On the deck, a curvy daybed, synthetic wicker pendant light, and funky geometric wire chairs conjure the bohemian quality Burns loves. Stairs lead down to the existing patio, which has an outdoor fireplace as well as a new addition — a very small pool inspired by a bathtub the homeowners enjoyed on a Costa Rican vacation.

Burns defined the dining space with a dreamy Cole & Son wallpaper in mint with gold metallic birch trees, an organic pattern that perfectly channels her natural-meets-glam concept. Around the reclaimed-pine extension table, white chairs add a pop of mid-century modern crossed with a Shaker silhouette. A framed print of baby’s breath is the finishing touch. Burns says, “It looks like it’s growing out of the trees [in the wallpaper].” 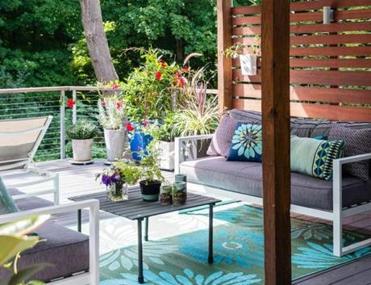 Trees made them fall in love with this house in Milton

Two decks and the owners’ British sensibilities transform a residence into an indoor-outdoor showpiece.

The kitchen, which has a loft-like feel thanks to the open mezzanine above, required minimal fuss. Replacing contemporary light fixtures with industrial-style navy pendants on gold chains along with a white wood-bead chandelier infused personality, which Burns amped up with mixed-metal bar stools. Tucked around the corner, a brass-trimmed Lucite bar cart cements the fun summer feel.

On the second floor, Burns lightened the mood while maintaining restraint. An airy palette keeps the master suite serene. Delicately patterned wallpaper — on one wall so as not to overwhelm the space — anchors the rattan headboard, and a teak-and-rattan bench adds texture at the foot of the bed. “I’d sprinkle rattan through the entire house if I could,” Burns says half-jokingly. “Natural materials bring the cozy to a home.”

In the guest bedrooms, Burns opted for saturated accent colors — teal velvet upholstery in one room, and in the other a black feature wall and a green tropical leaf pattern on the headboard. Fun California-cool accents abound, including fringed chandeliers and atmospheric framed prints of cactuses, pineapples, and palm trees.

Mostly, though, guests hang out with the hosts on the deck, the French doors wide open for seamless flow from indoors to out. “Music plays while we grill, and after we eat, we might take a dip in the pool before enjoying more cocktails and conversation by the fire pit,” Burns says. “We never need to leave home.”