Although color was not foremost on Irene and Lionel Harris’s minds when they hired designer Dane Austin, by the time he wrapped up their project, he had woven myriad hues throughout the five floors of their South End town house. “They initially asked me to shift a few rooms around, but it turned out that there were other issues,” Austin says. “Including the neutral palette.”

Austin is not into beige. “It reminds me of a bowl of oatmeal,” says the Boston-based designer. “Only when you dress it up with apricots, apples, and cinnamon does it become exciting.”

The Harrises had purchased high-quality furnishings when they first moved into the newly renovated home in 2013 with their children, Ian, Clay, and Cailey. In the five years since, their needs and tastes had changed. Rather than start from scratch, Austin worked with the existing scheme, adapting some pieces, relocating others, and introducing new ones when necessary. “I try to preserve what will work with the next iteration of the design,” he says.

On the ground floor, the kitchen still felt spiffy, but the postage-stamp-size rug and oversize table in the adjoining dining room fell flat. A custom Keith Fritz dining table with two leaves now sits atop a statement rug woven with a dramatic abstract pattern. Splashes of color in the rug informed the marine blue raw-silk wallcoverings flanking the fireplace, where Austin hung prints scavenged from other rooms. He also enlivened the cabinet fronts with bronze-colored mirror inlays. “It helps bounce light around the room and picks up the metallic threads from the drapery,” he says.

To avoid repainting the parlor-level living room, Austin added color using furniture and accessories. A gas fireplace came out to make space for more seating, which includes armchairs reinvented with biscuit-tufted box cushions and a fun print. Rather than sacrifice the expensive Stark rug that had been cut to fit around the hearth, Austin positioned the new buttercup-colored velvet sofa on top of the cut-out. (The original sofa replaced a beat-up one in the family room.) 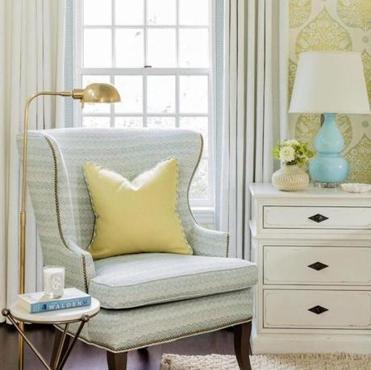 From splurging on drapes to layering rugs, insider tips from the Newton designer behind the Elements of Style blog.

The showstopper is the mixed-media artwork by Jay Kelly, a commission through SoWa gallery Claire Carino Contemporary. It features a still from the couple’s favorite movie, Hong Kong filmmaker Wong Kar-wai’s modern classic In the Mood for Love, which is partly set in Irene’s native Singapore. “We wanted to reflect her Asian heritage,” Lionel says. On the Asian-style cocktail table, the family plays mah-jongg, chess, poker, and Jenga.

The adjacent family room already had rust-colored grass-cloth wallcoverings but needed more vibrant moments. Pillows made from global-inspired prints and new fringed-tape trim on the Roman shades did the trick. “The solid brown fabric felt very heavy,” Austin says of the window treatments. “It needed to be dressed up.”

One level up, he made a few small but significant adjustments in the master bedroom. The bedside lamps moved to the living room, replaced by more appropriately scaled pieces. New woven shades block sunlight — a fix implemented throughout the house — and complement the wallcovering. (Irene had wanted the damaged grass cloth torn out, but Austin was able to repair it.) And clearing toys from the sitting area created a cozy spot by the fireplace.

Then there were the room swaps. Cailey moved out of the nursery off the master bedroom, and Lionel claimed that space as his office. Austin designed a custom daybed with hidden drawers that maximize the small space. The kids curl up to watch television while Lionel is at his desk, and a guest can crash there in a pinch. Lionel says, “I love that I have everything to work, play, or relax, all right here.”

After Ian went off to college, Cailey took over his fourth-floor bedroom. For the feature wall, Austin helped Irene choose a landscape-like watercolor-style mural inspired by a vintage Persian rug he relocated from Clay’s room. Clay got a new rug along with Ian’s upholstered bed. Finally, Austin transformed Lionel’s former office into a homework den outfitted with a custom desk that morphs into a Murphy-style bunk bed, where Ian sleeps when he’s in town.

Austin created well-functioning spaces for all, spreading color along the way. And he didn’t waste a thing. Lionel, who has since tasked the designer with revamping the roof deck, characterizes the updates as “crisp” and “sharp.” Austin says, “I look at every element and ask, ‘Is it special, interesting, and unique?’” Now, every room is all of the above.