It’s 5 p.m. on a January weekday and I’m on Interstate 395 South in Washington, D.C. Traffic is heavy but flowing smoothly and I think, “Why can’t Boston roads be like this?” Then I realize: Oh yeah, the government’s shut down. And in a flash, I have a brilliant idea for solving Boston’s notorious jams: Let’s have a recession!

Still, you may remember that, in the midst of the Great Recession, commutes around these parts were a lot easier than they are today. Why? Because with Boston’s unemployment popping to a high of 8.4 percent in September 2009, a lot of folks weren’t on the road during rush hour.

Today it’s a different story. Unemployment in the metro area is down to a scant 2.4 percent. If you’re driving on Interstate 93 or the Massachusetts Turnpike or any other major artery, you’ve seen the impact: Traffic is terrible. In 2018, Boston drivers spent an average of 164 hours in rush-hour congestion — the worst in the nation, says transportation analytics firm INRIX.

That’s the downside of a booming economy. 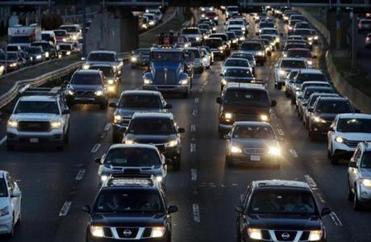 It’s not your imagination. Your Boston commute is getting worse.

Even in a city that has long known traffic headaches, congestion has extended commutes to lengths that approach a breaking point.

And the cure? Some are pushing for new roads, high-tech fixes like “smart lights,” or even gondolas. But Boston’s experience with the Great Recession and D.C.’s own shutdown suggest a simpler approach: Why not decrease demand?

Consider this: Although D.C.’s clogged highways improved during the shutdown, it’s not as if no one was going to work. The federal government employs about 361,000 people in the D.C. area, just under 11 percent of the area’s workforce. The shutdown was partial, however — 75 percent of the government remained open — and of those agencies that were shuttered, at least half of their workers still had to come in. That suggests the number of commuters around D.C. probably dropped by less than 5 percent. Yet the traffic jams were over!

Folks who study traffic jams (for a living, that is; not just gazing out their car windows in fury) say that roadways have a kind of tipping point. They are built to handle a certain number of vehicles — say, 5,000 an hour. Just a slight increase over that number, however, and things get dicey. Minor matters such as drivers switching lanes or slowing for an exit have a ripple effect, causing the starts and stops that make a commute intolerable. That’s the point made to me by Chris Dempsey, director of advocacy group Transportation for Massachusetts. Congestion, he says, is non-linear: the rule of thumb is that a 5 percent cut in traffic means a 20 percent drop in congestion. And the logical conclusion from that is that just a small reduction in vehicles on the road can make for big improvements.

Which is exactly what I saw in D.C. during the government shutdown.

Dempsey’s group has been advocating for off-peak toll discounts. The idea is to charge less during non-rush hours, hoping that some non-commuters — such as commercial traffic — would take the bait and travel at a different time. It seems like a no-brainer, right? Except that some object. Budget folks fear the state would lose toll revenues. Others fear discounts are just a clever ruse to introduce congestion pricing — charging folks more to travel at peak times. And of course, it doesn’t make I-93 any better since those folks — lucky them! — don’t pay tolls at all.

Still, before we build another new road, can’t we at least try it out?

Toll discounts aren’t the only way to change behavior, however. Employers might allow staff to come in and leave at non-rush hour times, perhaps providing them with incentives such as cut-rate parking. Or employers might make it easier to telecommute. If a quarter of companies could stagger schedules so their workers could work from home just one day a week, we might see commute times drop by 5 percent. We could be back to the good old days of the Great Recession (without the job losses, of course).

Obviously, telecommuting doesn’t work for everybody. Customer-facing employees working in retail or food service have to show up. But for those who work desk jobs, it’s sometimes hard to figure out why we’re in the office at all. Improvements in electronic communications proceed apace. Everyone has high-speed Internet, meetings are held with Google Hangouts or Zoom web conferencing, and all the data we need can be stored in the cloud, available from anywhere. Telecommuting is on the rise, with about 5.2 percent of workers nationally doing so in 2017 — a 115 percent increase in 10 years. Massachusetts, at 4.7 percent, is below average, despite an economy built on telecommuting-friendly industries such as financial services and technology . Other states — Colorado at 7 percent or New Hampshire at 6.1 percent — are well ahead of us.

The point is this: Tough commutes are ultimately our fault. Rather than looking to the government for big, novel, or capital-intensive solutions, we could likely solve the problem by simply cutting rush-hour traffic by about 5 percent. And it shouldn’t be all that hard to do.

Tom Keane is a Boston-based freelance writer. Send comments to magazine@globe.com. Get the best of the magazine’s award-winning stories and features right in your e-mail inbox every Sunday. Sign up here.
Loading comments...
Most Popular in magazine
Real journalists. Real journalism. Subscribe to The Boston Globe today.