Trevor Fulmer is an interior designer and his husband, Jim Mattus, is a corporate lawyer — but that didn’t mean that Fulmer got free rein in making over their new South Boston home. “My work is a collaboration between designer and client,” he says. “In this case, the client is my husband.”

The couple moved to Southie from the South End in the summer of 2016 after triumphing over 15 other would-be buyers to land their house. “We fell in love with it because of the historic charm,” Fulmer says of the 1890 residence. “We thought many Boston condos felt cookie-cutter and lacked character.” The 1,676-square-foot single-family property has three bedrooms, a two-car garage, and outdoor living space near the water.

The place was in good shape overall, though the kitchen needed work. With some easy changes, Fulmer transformed the home into a showplace fit for a style-savvy couple.

The first major fix was to lop off the double-height counter that topped the peninsula separating the kitchen from the dining area. “It jutted into the dining space, visually dividing the rooms, and didn’t leave space for a dining table,” Fulmer says. With the counters now all one height, he installed gray-veined white dolomite tops in place of the original black granite.  In a nod to Mattus’s love for gadgetry, the new sink has a touchless faucet activated by a motion detector.

The dramatic light fixture above the peninsula is a contemporary touch that contrasts with the Craftsman-style cabinetry. The height of each orb is adjustable, allowing Fulmer to set them just so. “It’s an art piece that glows,” he says. 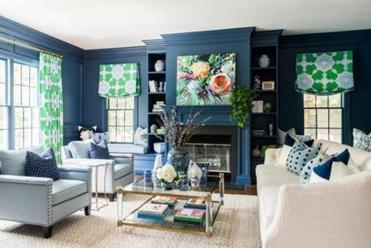 A designer employed shades of blue and quaint architectural upgrades to give this 1990s five-bedroom Needham home a family-friendly makeover.

For the dining area, Fulmer chose a vintage 1970s chrome-and-glass table. Attracted to their unobtrusive profiles and transparency, he added Bertoia-style chairs — but they turned out to be incredibly uncomfortable, even with sheepskin covers softening the seats. “Jim hates them,” Fulmer says of the chairs. “We’re getting new ones.”

An oversize mirror from HomeGoods with the proportions of a doorway leans against the far wall, the reflection framing the stairway (which retains the original 1890 treads). The reflective surface not only opens up the space but gives the illusion of a whole other room. Fulmer added picture molding to the upper portion of the walls to echo the existing wainscoting below, an elegant detail that enhances the home’s classic feel. Benjamin Moore White Dove paint unifies the space and renders it both bright and warm, as do the refinished wood floors.

The living room décor blends both men’s tastes. The sofa’s clean lines appeal to Fulmer, and its transitional styling — the piece sports nailhead trim, which Fulmer says his husband would add to anything — works for Mattus. The mid-century modern flavor of the caramel leather Seville chair, modeled after Mies van der Rohe’s iconic Barcelona chair, suits Fulmer’s taste without feeling cold or off-putting.

The finishing touches are also studies in compromise. A vintage Persian rug incorporates age and character, while the three-dimensional artwork by local fiber artist Dora Hsiung is a colorful, contemporary showstopper. “It changes color when you walk from one side of the room to the other,” Fulmer says.

He achieved a similar effect in the entry — a “wow” moment for guests — with a playful installation of jacks by ceramicist Kaiser Suidan. Fulmer fussed with it so much that the artist, whose studio is outside Detroit, basically told him to chill. Fulmer recalls, “He said it would look great however I put them up, but I like knowing what I’m getting.”

Upstairs, the bedrooms are richly layered with wallcoverings, textiles, metals, and wood. Fulmer used shades of gray in the master bedroom, despite his husband’s predilection for blue. “We didn’t see eye to eye on Jim’s love for navy,” he says. “But we needed a range of tones, and lighter blues veer into periwinkle.”

He did, however, bow to his partner’s distaste for a pair of white acrylic bedside tables, replacing them with wood chests. And he trimmed the upholstered headboard with nailheads. The trophy-style table lamps remind them of a vintage trophy display they once admired in the Ralph Lauren store on Newbury Street.

The safari-themed guest room also plucks inspiration from the famed designer. “When I said I want to do a themed room, Jim was skeptical,” Fulmer says. He swayed Mattus by pointing to Lauren’s fondness for safari-themed rooms and fashions, as well as Fulmer’s own mood board, which incorporated photos of five-star hotels in the Serengeti.

The room abounds with textures, including grass-cloth and faux-alligator wallcoverings, hand-woven baskets from Zimbabwe, fresh greenery, and throw pillows made from zebra skins. “Friends and family are always excited to stay in the safari room,” Fulmer says.

And the homeowners are excited just to come through the door. Says Fulmer, “Every day we walk in and think, Wow, we can’t believe this is our home.”