In comparison with cities that take historic memorialization seriously, Boston’s efforts are haphazard. This is conspicuously the case with the city’s literary heritage. The Public Garden, for example, has a 12-foot-tall statue of Edward Everett Hale, a late-19th-century writer and minister who almost no one living has read. But Ralph Waldo Emerson, the literary titan who launched transcendentalism? If you look really hard, you can find the 12-inch-by-9-inch plaque that marks the Summer Street site where he was born and raised.

Phillis Wheatley quite rightly has a seat in the Boston Women’s Memorial on Commonwealth Avenue, but other female writers have almost no presence in the city. And there’s a statue of Edgar Allan Poe on Charles Street South that dramatizes his quarrel with Boston’s literati, including Emerson, but there are no statues of the writers, editors, and publishers he called “Frogpondians.”

Then there’s Winthrop Square, which features a full-size statue not of John Winthrop, the first governor of the Massachusetts Bay Colony and famous chronicler of it, but of Robert Burns, a Scottish poet who never visited Boston.

Among these omissions, the treatment of the Old Corner Bookstore — the most important literary site in the city — stands out. In the middle of the 19th century it was home to Ticknor and Fields, a publishing firm that provided the model for how publishers could nurture the growth of American literature. In 1820 only 30 percent of the books published in the United States were written here; by 1856, while Ticknor and Fields were serving as midwives to the American Renaissance, the figure had risen to 80 percent.

Had Ticknor and Fields published only Nathaniel Hawthorne’s The Scarlet Letter , Henry David Thoreau’s Walden; or Life in the Woods , Emerson’s The Conduct of Life , Henry Wadsworth Longfellow’s “Paul Revere’s Ride,” and Julia Ward Howe’s “Battle Hymn of the Republic,” the building’s cultural significance would be well worth celebrating. And yet, although its lovely brick facade occupies a conspicuous spot on the Freedom Trail, as you approach the building on Washington Street, you find not a historic bookshop or literary museum but a row of fast-food restaurants. 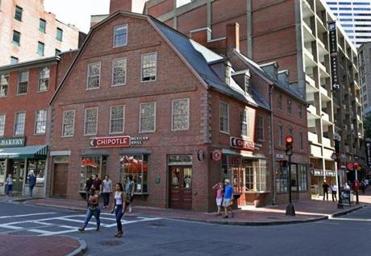 The Old Corner Bookstore will soon celebrate its tricentennial. Officials want to bring more awareness to the building’s presence.

How did this happen and how can it be fixed?

In 1960, to save the Old Corner Bookstore from demolition, the city acquired the property and sold it for $275,000 to Historic Boston Inc., a nonprofit organized for this purpose that went on to renovate other historic properties. Over the past few decades, space in the Old Corner Bookstore was rented to a number of businesses, including a Boston Globe company store and Ultra Diamonds. In 2011, to raise funds for maintenance and other projects, Historic Boston decided to lease street-level space to Chipotle Mexican Grill, and later to Bruegger’s, Dig Inn, and Sweet.

Recently, an online petition I drafted and launched — with the backing of writers, teachers, scholars, and the leaders and editors of American literature societies and journals — called on Historic Boston to support a feasibility study of repurposing the Old Corner Bookstore into a literary museum. Kathy Kottaridis, Historic Boston’s executive director, demurred, insisting that “the Old Corner Bookstore historically was always a commercial property, and keeping it that way is consistent with Historic Boston Inc.’s mission.”

An article in the November 1960 issue of the Boston Athenaeum newsletter allows us to test this claim. Beyond the threat of demolition, the citizens who saved the building were concerned about both the “less distinguished use” it had fallen into and the “billboards and signs” in the area. Their goal in creating Historic Boston was to preserve “the ancient buildings of Boston and thus perpetuate for the education of posterity the architectural, historical, and general cultural heritage of the city.” It’s hard to see how converting the interior spaces (which are important parts of a building’s architectural heritage) into fast-food restaurants and attaching corporate logos to the exterior walls can be seen as anything but the kind of “less distinguished use” Historic Boston was created to prevent.

What obligations do nonprofits have to serve the public interest? The very process of historic preservation is based on the recognition of a building’s significance to the public, to all of us, as part of our collective heritage. The question of which old buildings should be devoted to memorializing our history involves judgment, but the Old Corner Bookstore is not a close call. Would Salem be a better place if The House of the Seven Gables became a real estate office? It’s worth noting that Ticknor and Fields published Hawthorne’s The House of the Seven Gables in 1851, and, more broadly, that Salem, Hartford, and Concord do far better jobs of celebrating their literary history than we do in Boston.

Devoting all of the Old Corner Bookstore to this end would be an appropriate way to celebrate the place of literary Boston in the cultural history of the city and nation. But even a gesture in this direction would make a real difference. The Chipotle disappoints pedestrians who know what happened there and fails to inform those who don’t. Repurposing just this corner space when the Chipotle lease runs out would leave Historic Boston with three other prime retail locations and allow the rest of us to remember a part of our shared heritage that makes virtually no appearance along the Freedom Trail.

Paul Lewis is an English professor at Boston College and the editor of “The Citizen Poets of Boston, A Collection of Forgotten Poems, 1789–1820.” As chairman of the Edgar Allan Poe Foundation of Boston from 2010 to 2015, he helped make the case for installing the Poe statue. Send comments to magazine@globe.com.
Loading comments...
Most Popular in magazine
Real journalists. Real journalism. Subscribe to The Boston Globe today.