New England’s all-female tribute to Aerosmith has played all over Massachusetts, from Gillette Stadium in Foxborough to Blue Ocean Music Hall in Salisbury. Don’t underestimate the women’s ability to emulate Steven Tyler and Joe Perry’s distinct stage energy; the Aerochix’s gestures and tones complete their performance of Aerosmith hits from the past four decades. aerochix.com

Staying true to the Grateful Dead’s legendary live performances, this tribute band makes every show unique and unpredictable. Made up of former members of other Grateful Dead tributes, Playing Dead’s setlists aren’t for amateurs. With a repertoire of more than 120 songs and improvisational jams, audiences never know what to expect. playingdead.net

It’s all about capturing the unmistakable U2 sound while making the performance their own for The Joshua Tree. Although members don’t match the Irish band in appearance, the music doesn’t lie. Taking its name from U2’s 1987 album, this tribute band is dedicated to covering Bono and company’s catalog. Adoring fans might wonder whether they’re hearing the real thing. joshuatreeband.com

The American WHO Sensation

While only occasionally destroying vintage instruments, this celebration of The Who prides itself on authenticity. In addition to reproducing the British band’s classic vocals on stage, The American WHO Sensation rocks with the same power that thrilled fans in the ’70s. americanwho.com

This tribute band is dedicated to performing a “one-on-one re-creation” of the heyday Eagles, says Steve Kareta, the band’s founder. Each member represents an original Eagle, singing and playing their respective parts in a setlist of hits and deep cuts to please every fan, from the casual to the diehard. eagles-experience.com

Studio Two: The Beatles Before America 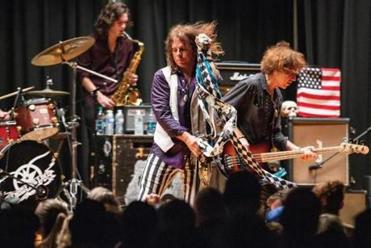 The dude looked like Steven Tyler. And he ended up in an Aerosmith tribute band.

For nearly 30 years, landscaper Neill Byrnes has played the part of the Aerosmith frontman in Draw The Line. For some hard-core fans, he’s just as good as the real thing.

In honor of The Beatles’ formative years, Studio Two almost exclusively plays songs from the pre-Sgt. Pepper’s era, particularly 1960-1964. The band re-creates every aspect of a Fab Four concert experience, from arrangements and vocals to John, Paul, George, and Ringo’s ’60s attire. studiotwotributeband.com