In 1979, I’d been a fashion writer and stylist for several years when the Filene’s department store in downtown Boston hired me to start a personal shopping service for executive women. Sure, luxury retailers nationwide employed personal shoppers, but they tended to dress socialites looking for la-di-da travel, resort, and special-occasion wardrobes. My job was to build a clientele of newbies to both the fashion and business worlds: women working their way up the corporate ladder in fields like finance, law, and management consulting who needed to dress professionally. The new service was, we felt certain, the first of its kind in the country.

Filene’s decision to create a female-centric Corporate Image department owed much to the 1977 publication of The Woman’s Dress for Success Book, by John T. Molloy, a follow-up to the clothing consultant’s 1975 bestseller written for men. According to the author, a self-proclaimed “wardrobe engineer,” the original Dress for Success was based on 15 years of extensive research. Much of his advice was useful, but some was puzzling: “If you are not a Southerner, but you’re selling in the South, never wear a polka-dot tie.” And other comments were downright insulting — to men and women.

After stating that “most American men dress for failure,” Molloy topped his list of men’s worst mistakes with “they let their wives or girlfriends choose their clothing.” Women were just too obsessed with the latest fashion, he explained — as if females were clueless enough to think the then-hip safari jackets and bell bottoms were a smart alternative to tailored suits for male bankers and lawyers.

Apparently Molloy took pity on women: His book for them appeared two years later. Again, it included some good advice, especially about appropriate colors, fit, and fabrics. But there was also condescending sexism, even for the times: “Despite the rhetoric of the feminist movement, many women, including businesswomen, continue to view themselves as sex objects . . . . Most men find women in pants very sexy. . . . If you are under 35, wear lipstick and little else” for cosmetics, he advised. Over 45, he adds, you need makeup.

If you were willing to overlook Molloy’s misogyny, the major takeaway was his suggested “uniform” for businesswomen, attractively modeled on the book’s front and back covers: a navy blue skirted suit, a white man-tailored shirt, and a scarf tied as an ascot. Unfortunately, that was also the uniform of many airline stewardesses (as they were known then). Similarly outfitted, more than one friend of mine was asked for a second bag of peanuts when flying to a business meeting. 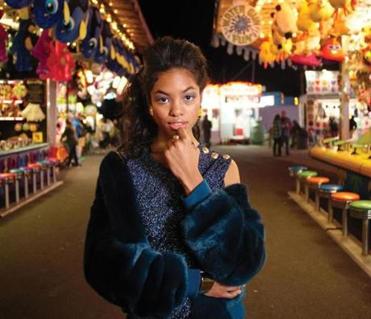 Attention-grabbing colors and whimsical colors and textures bring a sense of fun to these fall ensembles, photographed at a New Hampshire fair.

So I did my own research, interviewing human resources directors at some of Boston’s top companies. The consensus was that yes, there was an appropriate dress code for women in the office, but no, that didn’t mean exclusively wearing a man-tailored skirted suit and shirt every day. You could, in fact, be stylish and businesslike at the same time. And dress codes varied by profession.

That’s where I came in. I’ve always had a knack for making women look great — not by dictating my own taste, but by assembling a wardrobe that suits their particular needs, body type, and personal preferences. I became an expert at mixing and matching understated chic suits and separates with silk blouses, structured sweater jackets, clean-lined dresses, and sophisticated accessories to build an elegant — and stylish — business-appropriate wardrobe. It also made packing for a business trip a breeze.

My service quickly took off. Remember, this was before cellphones, selfies, and even the Internet. Women had few places to turn for practical business wardrobe advice. I worked with many successful women, including a politician who beat the boys’ club, a doctor who changed the face of breast cancer treatment, a public relations executive who started her own prestigious company, and television personalities who had long careers.

The most rewarding thing about my job was watching women gain more confidence, literally standing taller in stylish clothes that flattered them and enhanced their professional images.

The Filene’s job lasted for three years, and I had the pleasure of dressing many of those trailblazing women for decades after.

Times change. We’ve come to realize that gender isn’t binary, and dressing doesn’t have to be either. E-commerce, digital marketing, and social media fields, to name just a few that didn’t exist 40 years ago, are thriving, ushering in a point-of-no-return transformation of many workplaces where casual is the default setting. Still, that doesn’t mean anything goes. Below are just a few of the truths that endure for anyone who wants to “dress for success.”

■ You only get one chance to make a good first impression.

We’re not just talking job interviews here, but any time you meet a new or potential client, superior, co-worker, or even staffer. Take the case of the very accomplished Radhika Jones. Formerly the New York Times books department editorial director and deputy managing editor of Time magazine, Jones was named editor-in-chief of Vanity Fair last November. After her first staff meeting, attended by Vogue editor and Conde Nast artistic director Anna Wintour, news stories focused not at all on Jones’s media plans or proposed editorial direction for the iconic magazine, but rather on her fox-patterned tights — which Wintour was reportedly unhappily fixated on throughout the meeting. (Would the same hoopla have erupted if Jones had been a man wearing an offbeat tie?) In her official editorial photo, Jones avoids any whimsy. She looks chic and authoritative in a sleek navy pantsuit and white top.

When meeting anyone in business for the first time, ditch the bold prints, noise-making jewelry, and overly trendy fashions. Let the focus be on you.

■  Before you open your mouth, your clothes speak for you.

You may be brilliant at your job, but if no one listens to you, you’re not an asset to your company.

Research suggests that when employees look sloppy or underdressed for their profession at meetings, people are less likely to pay attention to, or value, what they say. Looking too youthful can also work against you, because it reads as inexperienced. A former client of mine was a 4-foot-10-inch professor at Harvard Business School with a pixie haircut who looked young for her age. The problem? She had a hard time getting students to pay attention throughout class. I suggested that she try wearing a severe black pantsuit and white blouse. She later told me you could hear a pin drop in the room.

Studies show that women often go into meetings at a disadvantage, because men interrupt them far more than the reverse. Don’t let your choice of clothes make the situation worse.

Look in the mirror before heading to work and ask yourself: Based on this outfit, what might passersby think I do for a living? In our world of Instagramming everything, many people are more judgmental about appearances than ever.

Even at a very casual workplace, don’t show up in anything you might wear playing sports, gardening, or going to the gym. That means no supersized-logo or second-skin activewear; no baggy sweats; no disheveled shirts; and no beat-up or stained denim. If you love the trendy shredded-knee jeans: Do you really want your co-workers betting on when your lower pants leg will finally fall off?

I recently saw a young woman walking into an office building in Copley Square wearing bunny slippers. It wasn’t even casual Friday!

Keep in mind you’re being paid to appropriately represent your company at work, no matter how informal the workplace. And neatness counts.

■  Always dress for the client.

Realtors know you dress differently selling office space to a Fortune 500 company than you do when showing a residential home. They — and you — want to appear both knowledgeable and relatable depending on the setting.

Take lawyers. A conservative suit that is appropriate for corporate clients can be off-putting to a jury. In fact, there’s a whole science built around dressing lawyers — and defendants — in the courtroom.

A blind lawyer once came to me seeking a business wardrobe of sophisticated color and pattern mixes to underscore his competence and savvy. We numbered every item — ties, shirts, suits — and he had Braille cloth tags sewn into each. He then made Braille index cards listing the combinations I had selected. It was a big success.

I also loved the challenge of dressing a female private detective. When first meeting clients, she needed to dress professionally but not conservatively, to gain their trust. Then she had to switch to the most boring wardrobe imaginable in an effort to go unnoticed while on the job. That’s not as easy as it sounds.

Consider who’s the most important client (or higher-up) you will be meeting with that day, and dress to impress that person.

■  Spend most of your business wardrobe dollars from the waist up.

Why? At work, you’re most often seen seated — behind your desk, at a conference table, or on a screen. Some people say shoes are the most important signifier of success in the corporate world, but that’s only partly true. Yes, you need quality footwear, but you’re better off spending top dollar on a beautifully tailored suit or jacket than on extravagantly expensive shoes. People don’t spend time in meetings staring at your feet.

Also consider the DPW, or dollars per wear. In New England in the winter, people will see your coat more than almost anything else. Invest in a well made one. Also worth top dollar are eyeglass frames. They’re on your face every day.

The best investments are not only from the waist up, but items with mix-and-match versatility.

Will the right clothes get you that job, raise, or promotion? No, but even in today’s more dressed down work world, they still can help — or hurt.

Tina Sutton is a regular contributor to the Boston Globe Magazine. Send comments to magazine@globe.com. Get the best of the magazine’s award-winning stories and features right in your e-mail inbox every Sunday.Sign up here.
Loading comments...
Most Popular in magazine
Real journalists. Real journalism. Subscribe to The Boston Globe today.