The decision by President Trump to decertify the Iran deal and impose sanctions on the Islamic Revolutionary Guard Corps marks the public debut of a campaign that’s been underway since the spring, when Trump ordered his national security team to find ways to “roll back” Iranian influence.

As we’re likely to see over the coming year, Iran has cultivated its own options to throw nails and bomblets in the path of any presumptive American juggernaut. It might be possible to roll back Iran’s reach in the Middle East, but not without painful costs, which can be visited on a web of American targets and allies located throughout Iran’s sphere of influence.

According to Middle East experts who have consulted privately for the administration on Iran policy, the president asked for ways to raise the price for Iran of its expansionist policy in the region — without exposing America to direct new threats. That might not be possible.

After a decade during which America tried to balance the regional contest between Iran and Saudi Arabia, with its deepening Shia-Sunni sectarian inflection, Trump has cast his lot with one side. When he placed his hands on a glowing orb in Saudi Arabia, he overtly endorsed an all-Sunni gathering whose primary purpose was to counter Iran in the region.

We’re about to witness a real-life test of an Iran policy that eschews diplomacy and embraces confrontation. Trump and his advisers have described their volte-face against Iran in terms of deterrence theory, which attempts to put a scientific gloss on how threats of war play out between two nuclear powers capable of mutually-assured destruction. 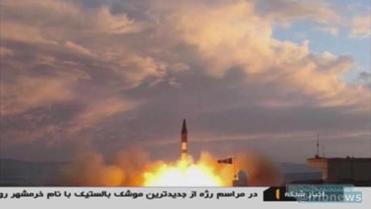 A pull-out will trigger a crisis that will significantly increase nuclear dangers.

But it’s not deterrence theory that offers the best guess of what the coming escalation with Iran might look like, it’s the gritty modern historical record.

During America’s messy occupation of Iraq, militias trained and funded by Iran were able to pose the most sustained military challenge to US troops. Sophisticated bombs called “explosively-formed penetrators” were able kill Americans even in the US military’s best armored vehicles. US officials believed that Iran provided these weapons and the training to use them — but kept their hands off the operations so they wouldn’t provoke a direct conflict.

Late in his final term, in 2007, President George W. Bush slapped a foreign terrorist organization designation on the elite Quds Force of the Iranian Revolutionary Guard, but stopped short of designating the entire armed forces, a move which Iranian leaders have said they would consider an act of war. Around that same time, some American officials were musing publicly about preemptive military strikes on Tehran’s nuclear program.

Then, as now, Washington was exploring a wider escalation with Iran while also probing for ways to prick Iran in regional flashpoints. One apparent pushback saw American troops detain five Iranian employees at the consulate in the Iraqi city of Erbil.

In that heated context, a remarkable raid took place on January 20, 2007. Militiamen in American uniforms, driving a convoy of SUVs identical to those commonly used by US troops and contractors, sped into an American facility in Karbala. They were inside before guards noticed anything amiss. They spared the Iraqis on the base, targeting only Americans, and managed to kidnap five soldiers who were later killed by their captors.

Evidence later emerged connecting the attack to Iran; not conclusively enough to justify direct retaliation by the United States, but enough to leave another bruise, and another argument that America couldn’t tangle with Iran cost-free.

Officials and analysts around the Middle East have speculated for years about where Iran might begin striking back against American interests if the two nations came to blows.

The Karbala raid suggests what Iran is capable of. In recent statements, commanders of the IRGC have warned that American installations could be targeted anywhere within 1,250 miles of Iran’s borders — the range of Tehran’s conventional missiles.

But a direct strike would engulf Iran in a direct war with the United States in which it would be at a great disadvantage. History suggests that Iran’s leadership prefers indirect conflict, with all the advantages of asymmetric warfare and plausible deniability. And there are a plethora of American targets in the Middle East that are exposed to Iranian-linked malefactors who could strike with weapons much more basic, and less traceable, than a long-range missile.

Today there are more than 5,000 American troops stationed in Iraq. Meanwhile, Iran’s regional relationships have grown deeper and broader. Along with its long-time militia allies, including foreign groups whose members spent the 1980s and 1990s in exile in Iran, today there are tens of thousands of new militiamen actively trained and advised by Iran. They are part of the Popular Mobilization Forces created to fight the Islamic State, or ISIS. Many PMF units are directly under Iran’s control but fought hand in glove with the United States in the campaign against ISIS.

Today, some of those same PMF militia fighters are embroiled in a dangerous confrontation with Kurdish Peshmerga forces around Kirkuk.

A quick perusal of Iran’s reach and alliances lends credence to what longtime Iran watchers argued: Iran does best in a regional proxy war. According to this analysis, Iran has little incentive to break out to a nuclear weapon, or fire the long-range rockets it already has developed, while it has every incentive to magnify its ability to destabilize and threaten rivals with indirect attacks by groups it supports: acts of sabotage, terrorism, and proxy warfare. (Supporters of the Iran nuclear deal argued that Iran’s penchant for indirect warfare meant it was never likely to pose a nuclear threat even if it did acquire a weapon, while critics said it underscored the destabilizing danger of Iran’s unchecked spoiler tactics.)

Examples abound, from the campaign of hostage-taking in Beirut in 1980s (mostly conducted by Hezbollah, but clearly at Iran’s direction), to the creation of proxies in Lebanon, Syria, and Iraq, to support for hyper-sectarian politics across the Levant and the Arabian peninsula. Sure, other regional powers like Saudi Arabia have used the same tactics, but to far less effect and usually not in direct opposition to US interests (at least when it comes to state-orchestrated violence; terrorist blowback and a permissive environment for terrorism are another matter entirely, and the reason why a sounder policy from Washington would entail containing Saudi Arabia as well as Iran.)

Status quo powers like the United States, Russia, and China, even when they are competing for influence, share a common interest in unified, effective state structures. They like to do deals (for oil, weapons, or other commodities) and build alliances with unitary governments that have a clear leader and functional institutions.

Iran, by contrast, has done well in the Middle East when its neighbors are too weak and fragmented to pose a threat. The Islamic Revolution almost collapsed during the war with Saddam Hussein in the 1980s. Iran’s leaders concluded that their best bet was to cultivate unstable, fragmented, and squabbling neighbors who couldn’t pose such a threat. Iran has mastered better than any other intervening power the tactics of jockeying for influence in a kaleidoscopic, unstable war zone with dozens of competing militias and power centers.

While other powers have struggled to maintain toeholds in shifting environments like Iraq, Syria, and Lebanon, the security apparatus of Iran has built thriving spheres of influence; its operatives are comfortable working with multiple, even dozens, of proxies, warlords, and local allies. The Iranians are able to hedge their bets and extend their influence in these fragmented zones of authority not because they are evil geniuses, but because their goals are different and easier to achieve.

Furthermore, the Iranians have a home-court advantage – their stake in the Middle East can’t fluctuate like it does for faraway imperial powers. Tehran also has invested in a long game, without end. Many of its operatives spend their entire careers working in Iraq, Syria, or Lebanon; they speak fluent Arabic and build relationships over decades with their military, intelligence, and political counterparts.

They seek unimpeded military access to proxies, influence with governments, and access to markets — all goals easily achieved in a context of fraying state authority.

Needless to say, it’s easier to undermine and erode state institutions than to build them.

This skill set — honed in Lebanon since the early 1980s and then later in Syria and Iraq — translated easily to the war in Yemen that expanded two years ago. It most certainly will help Iran in a phase of renewed confrontation with Trump’s America.

Thanassis Cambanis, a senior fellow at The Century Foundation, is the author of “Once Upon a Revolution: An Egyptian Story.” He is an Ideas columnist and blogs at thanassiscambanis.com.
Loading comments...
Most Popular in ideas
Real journalists. Real journalism. Subscribe to The Boston Globe today.