THE AUTHOR RACHEL CUSK likens the early days of motherhood to being brainwashed or taken over by a cult. “I remember when my own children were born, when I first held them and fed them and talked to them, feeling a great awareness of this new, foreign aspect of myself that was in me and yet did not seem to be of me,” she writes in “Aftermath: On Marriage and Separation.”

This feeling isn’t uncommon among new mothers. The total surrender of yourself to your helpless infant is often described as hard-wired, as if a force bigger than yourself is at work.

It may actually be a very small force at work. During pregnancy, the placenta allows a small transfer of cells between mother and fetus — a phenomenon called microchimerism. Each of us is born with our mother’s genetically distinct cells inside us, and our mothers end up taking in cells of ours.

Scientists have known for years that microchimerism occurs, but it has mostly been viewed as a remnant or souvenir of pregnancy, something that goes on to be superfluous, like a belly button.

Now, scientists are starting to see this process as purposeful, as if the fetal cells are actively manipulating the mother from within. The field has taken on a new sense of urgency. The cells have been shown to persist for decades, perhaps even for the rest of the mother’s life, and in many instances, they’ve been shown to offer biological benefits to mothers. As a result, immunologists are raising questions about the cells’ function, evolutionary biologists are asking questions about their intent, and both argue that we need to rethink our normal dogmas about identity. 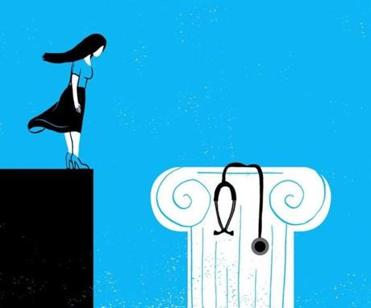 Looking for a few good docs

Cusk was on to something.

“In a way, your identity really has changed,” says J. Lee Nelson, a researcher at the Fred Hutchinson Cancer Research Center in Seattle. Mothers “acquire these small dosages of genes that aren’t inherited in the traditional Mendelian way. You get them from your kids.”

Although the migration of cells goes both ways in placental mammals, the role of fetal cells in the mother’s body tends to constitutes the bulk of research. That’s because it’s easier to study: Researchers simply scan for Y-chromosomes in mothers who have sons. Fetal cells have been found in virtually every organ of a mother’s body, including her brain and heart. A study in mice even showed that fetal cells acted as neurons in the mothers’ brains.

All of which suggests microchimerism lives up to its namesake: the chimera, that fire-breathing monster in Greek mythology who is part lion, part goat, part snake. With fetal cells going on to do a host of interesting and potentially even rogue operations inside the mother, the process has captured imaginations as much as the ancient beast did.

“I’m always fascinated by unusual phenomena,” says David Haig, a researcher with the Department of Organismic and Evolutionary Biology at Harvard. “And microchimerism appears to be quite ancient in mammals so I expect there has been important evolutionary forces involved.”

It falls mostly to evolutionary theorists like Haig to try and explain why fetal cells act the way they do. Hypotheses range from the commonsensical — like how fetal cells are frequently found in breast tissue, as if the unborn baby sends an advance team to ensure it will have enough food — to the rather dystopian — like how fetal cells found in the uterus could possibly be working to prevent, or even terminate, younger siblings, thus ensuring Mom’s attention for longer. (Fetal microchimerism is more readily detected in women who have experienced a miscarriage.)

Haig says that we still don’t know just how many kinds of cells are involved in the transfer. The mother and offspring cells, yes. But maternal grandmother’s cells and cells from older siblings may pass to the fetus as well.

“Microchimerism,” Haig says, “is very much a case where genetic relatives are present in the same body.”

And that reality — that an individual is more than just his or her personal genome — has implications for everyone, not just the new mother who feels most profoundly that her body has been taken hostage. “It’s not only us,” says Sami Kanaan, another researcher at the Hutchinson Center. “It’s us, plus our mothers, plus our children if we have them, that are living with us.”

‘Microchimerism is very much a case where genetic relatives are present in the same body.’

The realization that our bodies function as complex ecosystems is not new, of course. Recent research into the bacteria living inside our guts brought the term “microbiome” into the common lexicon. But scientists like Sing Sing Way, at the Cincinnati Children’s Hospital, say understanding the “microchiome” is just as important.

“These cells can teach us how immunology naturally works,” Way says. “Realizing that people are constitutively chimeric — that they contain all these generically foreign cells — could fundamentally change the way we think about a wide variety of problems like autoimmunity, transplantation, vaccines and cancer, because it opens up a new way for us to view what immunological identity really is.”

There are already hints that these immune interactions can be critical. Fetal cells were found significantly less often in women with breast cancer compared to healthy women, for instance.

But biology is complicated, and there are instances where fetal cells seem to cause chaos in a mother’s body. Autoimmune diseases, for instance, are more common in women and occur when the body’s cells inexplicably attack its own tissue. It’s possible that in such diseases, fetal cells could be interfering with the normal balance; higher levels of fetal cells have been found in women with scleroderma — an autoimmune disease that hardens the skin and sometimes internal organs.

Nelson thinks that if we can better understand what is protective about microchimeric cells, it could lead to vaccines for autoimmune diseases and even preventative measures for cancers.

In the meantime, she says, new mothers going through what Cusk described should take comfort from the fact that it’s not all in their heads. “Historically, when I started out,” Nelson says, “everything was written off to hormones. But this is a foreign being.”

Motherhood, it turns out, really does change you, and physiologically speaking at least, it looks like it might change you for the better.

Chloe K. Fox is a freelance writer and editor based in Cambridge.
Loading comments...
Most Popular in ideas
Real journalists. Real journalism. Subscribe to The Boston Globe today.