Slang is probably as old as human language, though the first slang dictionaries only started popping up in the 16th century. But nothing has been a boon for slang lexicography like the digital age, as the searchability of newspaper databases has allowed the past to be explored like never before.

For fans of English at its rawest, the recent arrival of the online version of Green’s Dictionary of Slang is a major event. It’s also a reminder that slang — for all its sleaze and attitude — is just as susceptible to careful research as anything else.

British lexicographer and author Jonathan Green’s GDoS is the largest slang dictionary in the world, collecting terms from the United States, England, Australia, and everywhere else English is the dominant language. GDoS, like the Oxford English Dictionary, is a historical dictionary. This type of dictionary provides a lot more than definitions, etymology, and pronunciation notes: Historical dictionaries trace the evolution of terms over time. Since the best fossil evidence of word change is quotations, historical dictionaries are full of them, allowing readers to see how words function in the wild. A regular dictionary is a little like snapshots taken of zoo animals. A historical dictionary is more like footage from a hidden camera in the jungle or ocean.

This example-based approach is also the opposite of user-generated dictionaries such as Urban Dictionary. All major dictionaries crowdsource. But when there’s no editing or fact-checking, you get an entertaining product that’s far from a reliable source on what words are actually being used. Dictionaries such as Urban Dictionary are a good source of nonce words — words coined for a single occasion that haven’t caught on — but one-offs aren’t the kind of lexical fish lexicographers usually want to catch.

Ironically, the biggest boon to cutting-edge lexical research is the existence of an older medium: the newspaper. Green, who has published numerous books about language and been working on GDoS since 1993, cites the increased availability of newspaper databases as the biggest transformation of his research in the past five years: “And what you find is . . . that things are older than we believed.” Just as a fossil discovered in Greenland this August pushed the earliest sign of life on Earth back to 3.7 billion years ago, lexicographers are constantly learning that words are older than they thought. In the word biz, finding a new earliest example is called antedating. 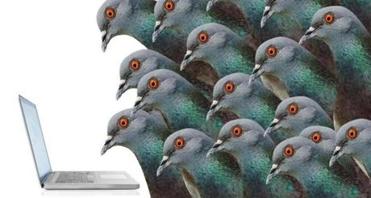 Source or be sourced

What began as business jargon has become a fertile and quirky family of words.

An extraordinary case involves the word “dis” in the sense of an insult: “He dissed me!” Green had assumed the term originated among African-Americans in the 1980s. However, that theory was disproved by an example from 1905 in Australia of all places. Green located this surprising use in the Perth Sun Times: “When a journalistic rival tries to ‘dis’ you / And to prejudice you in the public’s eyes.” Rather than suggesting a hidden Australian influence on African-American vernacular, this finding is more of a testament to the latent potential of “dis” to detach from words such as “disparage” and “disrespect.” Oddly, Australia is also the home of another surprising earliest use: “Selfie” was spotted there in an Australian message board in 2002, well before it became a ubiquitous part of the lexicon of narcissism.

Some discoveries are far quirkier, involving whole groups of words that, if not for extraordinary circumstances, would have been destined to be lost. Green explains, “In the UK, for instance, you’ll get some anonymous bloke (or so I assume) in, say, 1815 who has spotted tramps wandering through his small town, and has taken it upon himself not only to quiz them about their vocabulary — which is of course largely slang — but also persuaded the editor of the local paper to run one or even a series of pieces laying it all out. He’ll never publish a dictionary, never write again, but there it is, and half of the stuff has never been in print before. Stumbling upon a few of these has been a joy.”

That joy is well-known to Indiana University professor Michael Adams — author of “Slang: The People’s Poetry” and the recent “In Praise of Profanity” — who feels work such as GDoS, through its many discoveries, gives a fuller sense of our collective history: “I like to hear English represented by many voices. . . . GDoS introduces us to voices excluded in many cases from other dictionaries.”

Those voices are often a challenge to conventional values or even laws. The first slang dictionaries were collections of the language of criminals meant to inform the unwary, and slang topics still tend to be taboo or at least lowbrow. Good taste, manners, and other nonscientific ideas have often imposed censorship on dictionaries — even the OED didn’t publish an entry on the f-word until 1972. But slang dictionaries have a license to be naughty: Readers expect to read all the filth and slurs that lexical prudes would cover up and euphemize. Playing off counterculture, Green sees slang as an inevitable “counterlanguage” and says “that subversion can be achieved through shock — one cannot deny a streak of the gross for gross’s sake — but also through wit and inventiveness.”

Speaking of gross and inventive language, it’s hard not to notice that slang dictionaries, including GDoS, are full of profanity and plays on profanity such as the euphemisms “mother-hugger” and “mothersomething.” Adams, having written books on both profanity and slang, is an expert on the slippery difference between the two. For Adams, profanity is “the riskiest slang” and has a particular utility: “If suddenly it starts storming and your backpack falls into a puddle as you collide with a bicyclist while a bird poops on you, only profanity or a euphemism for profanity — which you can’t have without profanity — will express your existential frustration.” Damn it, he’s right.

Slang tied to social groups but untethered by convention is language at its most raw and real. That realness, full of rude creativity, is why so many delight in learning slang, which Green says catches us “at our most human.” We’re lucky to not be dog’s meat or fried bread (two older terms for “dead”) at a time when so much real language can be easily unearthed, shared, and enjoyed.