For the second time this week, a major hospital chain has agreed to pay millions of dollars to resolve a lawsuit related to concurrent surgery, the controversial practice in which a doctor oversees more than one operation at a time.

Northwell Health of New York agreed to pay $12.3 million to settle a claim by the federal government and three whistle-blowers that Dr. David Samadi, a former urologist at Manhattan’s Lenox Hill Hospital, allowed trainees to perform surgery without proper supervision while he operated on patients in another room. The suit charges that Northwell illegally billed Medicare for operations performed by the trainees.

The allegations reflect the “egregious monetization of human maladies, which is all too common in health care delivery today,” said Reuben Guttman, a Washington, D.C.-based lawyer for the whistle-blowers.

The announcement came a day after Massachusetts General Hospital agreed to pay a former orthopedic surgeon $13 million to settle his lawsuit claiming he was fired for raising safety concerns about colleagues who do two operations at once. Under the deal, MGH also offered Dr. Dennis Burke his old job back, which he declined, and named a hospital safety initiative for him.

Samadi, who specializes in prostate surgery, is well known beyond New York from appearances as a regular medical expert on Fox News. His celebrity patients have included former “Today Show” host Matt Lauer. 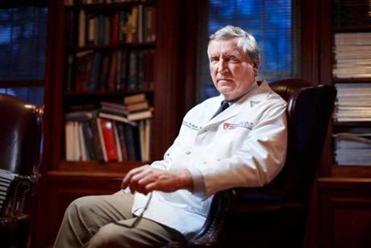 MGH settles for $13m with doctor who challenged double-booked surgeries

Dr. Dennis Burke was fired amid criticism of the hospital’s practice of double-booking surgeons during operations.

Samadi was the focus of a 2017 story by the Spotlight Team, which had investigated double-booking at MGH and other teaching hospitals. Samadi chaired Lenox Hill’s urology department and was one of the nation’s highest-paid surgeons, earning nearly $6.8 million in 2017, according to Northwell federal tax filings.

Seven months after the story ran, three whistle-blowers featured in the article — a patient, his wife, and the son of another deceased patient — filed a lawsuit under the False Claims Act, which the federal government joined. The suit alleged that Samadi defrauded the government by billing Medicare for surgical procedures by unsupervised second- and third-year residents. The suit was unsealed Thursday night, along with the settlement.

Northwell admitted in court documents that it had violated the False Claims Act. Northwell also acknowledged it illegally boosted Samadi’s salary if he referred more Medicare patients to Lenox Hill for operations — a violation of the federal Stark Law. And the hospital chain admitted billing for procedures that could have been performed in an office setting instead of an operating room.

The illegal practices led to “several million dollars of inappropriate claims” to Medicare, according to court filings.

“Patients put great trust in hospitals, particularly when it comes to surgery,” said Manhattan US Attorney Geoffrey S. Berman in a statement. “Hospitals cannot pay surgeons for their referrals, and they cannot run their operating rooms like assembly lines.”

Samadi’s employment contract with Northwell expired at the end of June, and his contract as head of urology expired a year earlier, she said.

The settlement was with Northwell and Lenox Hill, not with Samadi. The whistle-blowers are still suing Samadi, who operates a practice on upscale Madison Avenue in Manhattan. He did not return messages left with his office Friday.

One of the whistle-blowers, Peter Nadler, underwent surgery for an enlarged prostate gland in 2015, and he soon wondered whether someone other than Samadi did the operation. Nadler barely saw Samadi that day and mostly remembered his young assistants. His urinary problems didn’t improve and his libido vanished. He ultimately confronted the surgeon about who did the operation.

The settlement didn’t say who did Nadler’s operation, but the 70-year-old retired restaurateur was pleased with the settlement.

“I am very satisfied that my attorneys and the government uncovered fraud and wrongdoing and held Northwell and Lenox Hill Hospital to account for it,” he said.

Over a five-year period that began in 2013, Lenox Hill routinely let Samadi schedule two urology surgeries that would run concurrently in two operating rooms “in order to maximize the revenues that Samadi generated’’ for the hospital, according to federal prosecutors.

Samadi would typically perform high-risk, complex robot-assisted surgery in one room while a urology resident would perform conventional urology procedures using an endoscope in another room, the lawsuit said. Samadi would shuttle back and forth between the rooms. He rarely designated a backup attending surgeon to assist residents.

Although Medicare allows teaching hospitals to use residents to provide surgical care, the law requires that they must be properly supervised.

Samadi’s routine “not only violated Medicare law, it also violated Northwell’s own resident supervision policy,” said a news release by the US attorney’s office. “Moreover, Samadi’s patients were never informed that their surgeries were scheduled to overlap with another of Samadi’s scheduled surgeries.”

Joseph Lanni, one of the lawyers for the whistle-blowers, said the suit “exposed medical malpractice designed to inflate surgical volume” and “conduct that tramples on patient rights.”

The three whistle-blowers will share about $2.5 million from the settlement, Lanni said.

Lanni is also representing the whistle-blowers in a medical malpractice and consumer fraud lawsuit against Northwell, Lenox Hill, and Samadi in New York state court.

Although many surgeons at teaching hospitals schedule operations to overlap by a few minutes — letting trainees close the surgical wound of the first operation while the surgeon moves on to the second — the practice has drawn criticism, particularly when operations overlap for considerably longer.

Defenders of simultaneous surgeries say it makes highly trained specialists available to more patients for complex parts of operations and gives trainees growing responsibility for routine parts. But critics say surgeons who juggle operations for long periods endanger patients, who typically have no clue they are sharing their surgeon.

Jonathan Saltzman can be reached at jsaltzman@globe.com
Loading comments...
Most Popular in business
Real journalists. Real journalism. Subscribe to The Boston Globe today.