It started when Michael McCormack began struggling to complete routine tasks he’d done as a production supervisor at the company where he’d worked for 30 years. After a battery of tests, he was diagnosed with younger-onset Alzheimer’s disease. He was 54.

In the five years since, McCormack has held out hope for a cure, even as he has given up his career, stopped driving, and watched promising treatments fail and friends with the disease die or move into memory care facilities.

So when McCormack heard the surprise news Tuesday that an Alzheimer’s drug that had flopped in clinical trials earlier this year was being revived and submitted for US Food and Drug Administration approval, he felt a sudden burst of optimism — tempered by the reality that the disease remains incurable.

“When you live with this disease, it’s a roller coaster as far as promise and hope,” he said.

In March, that roller coaster plunged when Cambridge-based Biogen said it would stop clinical trials of an experimental treatment after studies showed it was not likely to succeed. The decision sent the company’s stock plummeting, and was just the latest blow to the millions suffering from Alzheimer’s, the most common form of dementia. In a report last year, the pharmaceutical industry said there were 146 unsuccessful efforts to develop treatments for Alzheimer’s in the 20 year period ending in 2017. 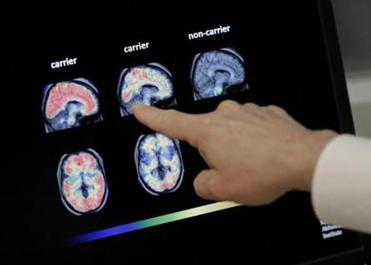 In the span of 16 hours, two giant biotech developments

Around 3 p.m. on Monday, the Food and Drug Administration announced it had approved a new combination drug by Boston-based Vertex Pharmaceuticals to treat cystic fibrosis — five months sooner than expected. Then at 6:30 a.m. on Tuesday, Biogen said it would revive a medicine for early Alzheimer’s disease that it scrapped as a failure in March.

“Uniformly, people were disappointed,” said Dr. Brian R. Ott, a neurologist at Rhode Island Hospital, who had 18 patients taking part in the trial.

McCormack said he was disappointed, too. Twice in recent years he had been invited to talk to Biogen researchers to discuss his views on a treatment, only to see the company’s years of work seemingly fail.

“Keep working hard, don’t give up on us,” he recalled telling Biogen scientists. “There are a lot of people like myself who are depending on Biogen. Put the pedal to the metal, and the hard work is going to pay off.”

And so, apparently, they did.

In a stunning reversal, Biogen said Tuesday that a “new analysis of a larger dataset” indicated the drug, aducanumab, was effective in improving cognition, memory, orientation, and language. Patients were also better able to handle daily tasks like personal finances, household chores, and independently traveling out of the home, the company said.

Biogen will now ask the FDA to approve aducanumab for treatment of early Alzheimer’s disease. If approved, the therapy would be the first to slow the progress of the disease by removing the proteins known as amyloids that clump together in the brain and disrupt cell function.

“This is very exciting for people like myself living with the disease,” said McCormack, a father and grandfather who lives in Salisbury with his wife of 37 years, Diane. But, he said, “I try not to get hopes up too high.”

Rebecca Edelmayer, director of scientific engagement at the Alzheimer’s Association, said she was excited by the announcement.

“We do believe this is a really encouraging moment,” she said. “This is the first time we’ve seen these kinds of large reductions in clinical and cognitive decline in some of these large trials.”

‘As far as I’m concerned, it’s just a matter of time before there’s a breakthrough.’

McCormack said he hopes to benefit from the drug, if it’s approved.

“I’m not suffering at the moment,” he said, adding that he enjoys long walks on Salisbury Beach. “We deal with it as best we can as a family, and continue to hope and pray that these biotech companies are going to come up with something, or one of these universities. As far as I’m concerned, it’s just a matter of time before there’s a breakthrough.”

Joe Montminy, a 56-year-old Plymouth resident who was diagnosed with Alzheimer’s in 2017, said slowing the progression of the disease by even a few years would be monumental for patients.

When he was diagnosed, Montminy was told he might not live another 10 years, and he has been trying to enjoy life since then, touring as many breweries as he can and taking a European vacation with his wife and their friends.

“Just getting another two or three years is something I would welcome and find absolutely amazing,” he said. “At this point, I don’t know what’s around the corner on a year-to-year basis, and how things may deteriorate.”

Ott, director of the Rhode Island Hospital Alzheimer’s Disease and Memory Disorders Center, said the patients who took part in the trial are “all very happy” to learn of the drug’s promise and hope to take advantage of the company’s offer to make the therapy available to trial participants.

“I think it provides hope that treating amyloids is a potentially successful or useful approach, and it also suggests that the earlier we start treatment the more likely” it is to succeed, Ott said.

He said the drug might even be helpful for patients who show buildup of amyloids in tests but no signs of memory loss or cognitive problems.

If the drug is ultimately beneficial, many said, it would be a salve not only to those with Alzheimer’s, but to their relatives and friends who often care for them as the disease progresses.

Katie Gallogly Lowell, 42, a preschool teacher in Coventry, R.I., is one of those family members.

She takes her 77-year-old father, David, to Rhode Island Hospital for regular infusions and tests as part of a clinical trial of another Alzheimer’s drug. She said she was excited that Biogen’s treatment is now showing promise.

“Alzheimer’s is a horrific thing to see happen,” she said after taking her father to the hospital on Tuesday. “I’m very hopeful that, even in my dad’s life, they are going to develop a drug – and it sound like it’s happening – that is going to slow the progression.”