In the mid-1960s, Elaine Denniston was a young woman with a high school education and excellent typing skills. So the temporary agency where she worked gave her a plum assignment: the Instrumentation Laboratory at the Massachusetts Institute of Technology, where she entered thousands of lines of software code onto paper punch cards — the USB drives of the era.

She knew the work was related to the US space program, but for the first couple of years the magnitude of the project didn’t quite sink in.

Then on July 20, 1969 — 50 years ago this Saturday — Denniston’s work, and that of thousands of engineers, scientists, and support personnel throughout the space industry, was vividly validated when astronaut Neil Armstrong hopped off the ladder of the lunar module and became the first human to set foot on the moon.

“I was very proud,” Denniston recalled recently, remembering how she, her husband, and their two children watched the moon landing live on television along with millions of people around the world. “I said, ‘I worked on that.’ ” 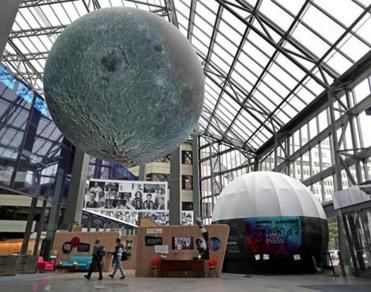 ‘One giant leap’: How to celebrate the 50th anniversary of the moon landing around Boston

July 20 marks the 50th anniversary of the Apollo 11 moon landing, and the breathtaking historical moment will be marked with a variety of events around Boston.

Denniston was among the hundreds who worked on the space program for the MIT Instrumentation Lab, which developed one of its most vital components: the guidance and navigation systems that directed the Apollo command and landing crafts to — and onto — the moon. The MIT outfit was under the direction of a colorful genius, Charles Stark Draper, and has since been renamed Draper Laboratory in his honor.

Hundreds more people worked at other research institutes and companies in Massachusetts. And their skill and diligence enabled the nation to fulfill President John F. Kennedy’s pledge to put a man on the moon in less than 10 years.

With its rich tradition of aerospace research, Massachusetts seemed almost predestined to play an outsize role in the space race.

“There became a technology movement in Massachusetts dealing with aviation, rockets, and computers,” said historian Douglas Brinkley, author of “American Moonshot,” a recent book on the space race. “And the Grand Central Station of all this was MIT.”

But the state’s prominent role in the space race was also partly due to politics.

“The president was from Massachusetts, and they needed a major contract here,” said David Mindell, an MIT professor, founder of a robotics company, and author of a book on Apollo. Indeed, the first major federal contract for work on Apollo was issued to the Instrumentation Lab in August 1961, a $4 million deal to build the ship’s guidance system.

At the Instrumentation Lab, Denniston worked alongside engineers such as Saydean Zeldin, who previously worked at General Electric on a project to identify incoming enemy missiles from the heat radiated by their falling warheads and had taught herself the Fortran computer language. At MIT, Zeldin was put to work on the software for the Apollo capsule’s booster rocket.

“I think I was the only one,” she recalled. “Everyone else had other things to do.”

An engine failure would have had awful consequences; indeed, Gregory Peck starred in a 1969 disaster movie about it, aptly titled “Marooned.” Zeldin never saw it.

“Everybody was sure it was going to work,” Zeldin, now 78, recalled, though she admits to worrying a little during the actual flight.

Another MIT colleague, Peter Kachmar, worked on the coding for the program that allowed the lunar landing module to rendezvous with the orbiting command module after lifting off from the moon.

A commercial jet would typically carry multiple so-called inertial navigation units to help with the guidance. But each one weighed 60 pounds, meaning less room for moon rocks. So the decision was made to have just one each of the navigation units in the landing and command modules,

Kachmar said there was never a problem with them.

Like Denniston, Kachmar at the time wasn’t awed by the mission.

“At the time you did it, it was more like, it’s a good job. Really interesting.”

But today, at 79, his perspective has changed. “Fifty years later, you sit down and say, ‘Wow, we did it,’ ” said Kachmar. “That’s when you get the aw-shucks moment.”

Another engineer, Hugh Blair-Smith, was busily reinventing the computer. He was on the design team that built software and hardware for the Apollo Guidance Computer, among the first to rely on chips rather than individual transistors or vacuum tubes. At a time when most computers could fill a large room, the Apollo computer weighed just 70 pounds, making it the ancestor of every PC, tablet, and smartphone in the world today.

A Harvard University graduate who’d created a computer game about a nuclear war in his spare time, Blair-Smith joined MIT in 1959 to develop a computer for an unmanned mission to Mars. That machine and its software became the prototype for the Apollo computer.

And because he had a responsibility to the Apollo astronauts, including Buzz Aldrin, an MIT graduate and Apollo 11 astronaut who followed Armstrong to become the second person to walk on the moon. Aldrin and other astronauts had visited the Instrumentation Lab to learn about and train on Apollo equipment.

“We became quickly aware that the lives of some very brave guys depended on getting everything right,” he said. “If you want some meaning for your life, you can’t get much better than that.”

Another MIT engineer, Lance Drane , recalled his work as a high-stakes game of make-believe. He wrote software that simulated the performance of the Apollo computer under every conceivable condition that might arise during a trip to the moon. An electrical engineering graduate of the University of Notre Dame, Drane came to MIT “because they said they were going to the moon. I said, ‘I doubt it.’ Then my next sentence was, ‘But you’re not going without me.’ ”

Drane’s coding skills were put to the ultimate test less than a year later, during the nearly disastrous flight of Apollo 13 in 1970, a life-and-death epic memorialized in the film of the same name starring Tom Hanks. When the service module was wrecked by an explosion, the three astronauts were doomed unless they could use the engine of the lunar lander to shove them back toward Earth. But the lander hadn’t been designed for the task, nor was there any software written to do so.

Drane and his colleagues had just a few hours to write the needed code and transmit it a quarter-million miles to the crippled spacecraft. The engine burn took place while Apollo 13 was on the backside of the moon, with no radio contact.

There was plenty of action beyond the MIT campus. The Instrumentation Lab designed the Apollo Guidance Computer, and Waltham defense contractor Raytheon Co. built it. Instead of using the memory chips found in today’s computers, MIT and Raytheon wove the software into copper wires threaded through tiny hollow magnets.

They called it “rope memory,” and it would preserve the spaceship’s software even after a power failure. Raytheon hired dozens of women from local fabric mills and a defunct watch factory and put them to work weaving the thin copper filaments that formed the ropes.

Bob Zagrodnick, a retired Raytheon engineer, was program manager of the project.

“It was truly a time when everyone did whatever was needed, working hard, long and late hours, sometimes 24/7,” Zagrodnick said. “I have chills down my spine every time I hear and, in particular, see on TV, the commemoration of the 50th anniversary of Apollo 11, knowing the personal contributions I made to its success.”

Raytheon made another major contribution to Apollo: the microwave broadcast system that transmitted live video from the moon to hundreds of million of viewers all around the world.

Another Massachusetts firm, David Clark Co. of Worcester, constructed the spacesuits worn by astronauts during the Gemini program, which preceded Apollo. The company’s suits didn’t make it to the moon, but David Clark did build the radio headsets astronauts wore inside their helmets, nicknamed “Snoopy cap” for their resemblance to the one worn by the popular Peanuts character.

In Houston, the famed mission control complex was upgraded for the moon mission by engineers from MITRE, a research and development corporation based in Bedford.

“Not only was the work good work, and technically challenging,” said John Quilty, a member of the MITRE team who now lives in Northern Virginia. “But of course . . . it was part of an exciting, challenging national endeavour.”

The highly-motivated veterans of Project Apollo continued to live accomplished lives, with many working on space projects.

Elaine Denniston, meanwhile, moved on from the Instrumentaiton Lab, graduating from Harvard University in 1973 and then going to Boston University Law School and practicing law.

During a recent visit to Draper Lab, which is hosting an exhibit and events in honor of the 50th anniversary, Denniston worried that the US lacks the commitment to send people back to the moon, and beyond. “I don’t see the individuals having that kind of dedication to anything, right now.”

Perhaps because he still works at Draper, Denniston’s former colleague Peter Kachmar is a little more optimistic. “I think humanity can accomplish anything, if it sets its mind to doing it,” he said. “I just don’t see the galvanized focus yet. But it may come.”