How much should Wynn Resorts pay for the transgressions of its founder and other former executives? That’s the question before the Massachusetts Gaming Commission now that the company has admitted to findings by state investigators that it covered up allegations of sexual assault and misconduct by former CEO Steve Wynn.

The commission could yank the company's license for the $2.6 billion Encore casino resort that is just a few months away from completion in Everett. But that would be a disaster for the state. It most likely would bring protracted litigation that could delay the opening of a Boston-area casino — and the flow of much-needed tax revenue — by several years, estimates my Globe colleague Mark Arsenault. The commission can’t force Wynn Resorts to sell its private property if the company chooses to fight, he says, and no developer would be willing to pay anything near its development costs for the project.

Moreover, a license revocation and branding of the company as “unsuitable” to run a casino would jeopardize its ability to open other casinos in the United States and around the world. Such a move would be disproportionately severe compared with the corporate malfeasance committed by the Wynn executives and board members who have been purged from the company.

The commission could choose to fine the company as Nevada regulators did earlier this year — to the tune of $20 million — after completing their own investigation of the Steve Wynn coverup.

But even though that was the biggest penalty ever imposed by the Nevada Gaming Commission, it's a slap on the wrist for Wynn, which had revenue of $6.7 billion and net income of $572 million last year. 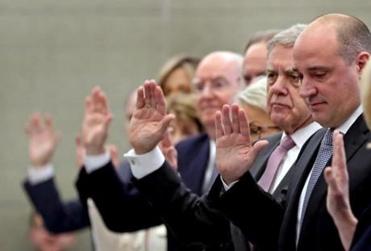 The 209-page report said that company officials, including some in the legal division, “were aware of certain allegations of sexual misconduct against Mr. Wynn involving employees.”

Here's what I think our gambling regulators should do:

■ Fine Wynn $100 million, which would take a real bite out of the company’s bottom line and send a clear message that we aren't homers like the Nevada commission.

■ Let Wynn keep its Everett license — on a conditional basis.

■ Establish a probationary period — 5 to 7 years — during which the state collects an extra 5 percent of the Everett casino’s net gaming revenue. This would be on top of the 25 percent the state will get once Encore opens.

■ Set up a process under which Wynn could earn back a portion of that added assessment by being a stellar corporate citizen. The criteria would need to be determined, but could include diversity goals and comprehensive sexual-harassment reporting and enforcement procedures.

■ Finally, I am torn on this, but I think CEO Matt Maddox should be required to step down. Before he succeeded Steve Wynn in February 2018, Maddox had been the company’s president since 2013 and Wynn’s right-hand man. He says he was unaware of the allegations against his boss until shortly before they were aired by The Wall Street Journal, and neither Nevada nor Massachusetts regulators have shown otherwise. But I find it hard to believe that Maddox, given his role as corporate consigliere, was completely in the dark. If he didn’t know anything, he should have, and his resignation would cement the company’s claim that it has cleaned house.

This is obviously a back-of-the-envelope proposal, and details would need to be worked out.

Steve Wynn and most of his cronies are gone from the company. Wynn Resorts doesn't deny it screwed up. It’s time to take it to the woodshed and move on.