The stages at the four main Berkshire theaters will be busy all summer — and in some cases, well past Labor Day. Here are a dozen of the season’s most promising shows.

A RAISIN IN THE SUN Lorraine Hansberry’s classic drama, starring S. Epatha Merkerson and directed by Robert O’Hara, about the African-American Youngers, struggling after the death of the family patriarch to decide how best to use life insurance proceeds that might represent a path out of poverty. Through July 13.

A HUMAN BEING, OF A SORT André Braugher stars in the world premiere of Jonathan Payne’s play, based on a true story, about an African-American convict who wrestles with questions of conscience, race, and power as he guards a Congolese pygmy in the Bronx Zoological Park in the early 20th century. Through July 7

GHOSTS Uma Thurman stars as Helene Alving in a new translation of Henrik Ibsen’s drama about a woman who welcomes her painter son home after he has spent years abroad, and is then forced to reckon with the lasting consequences of her late husband’s philandering ways. July 31-Aug. 18. 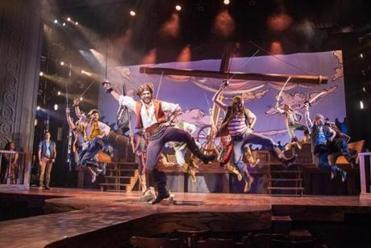 Why the Berkshires ought to be any theatergoer’s summer destination

The hills are alive with first-rate shows, but the vibe at the region’s four main theaters is as laidback as the season.

OUTSIDE MULLINGAR Karen Allen directs a romantic comedy by John Patrick Shanley about two middle-aged introverts in rural Ireland fumbling their way toward love amid a threat of disinheritance and a land feud. Through July 13

THE SKIN OF OUR TEETH Thornton Wilder’s 1942 comedy-drama about the allegorical adventures of the Antrobus family, perpetually threatened by the end of the world, stars Harriet Harris (Bebe on “Frasier’’), Danny Johnson, Lynette Freeman, and Ariana Venturi. Directed by David Auburn. July 11-Aug. 3

THE WAVERLY GALLERY Directed by Tina Packer, Kenneth Lonergan’s Tony-nominated drama about a family trying to cope with its matriarch’s decline into Alzheimer’s stars Annette Miller and Elizabeth Aspenlieder. Through July 14

THE MERRY WIVES OF WINDSOR The outdoors Roman Garden Theatre is the locale for Kevin G. Coleman’s production of Shakespeare’s comedy about Sir John Falstaff’s bumbling efforts to seduce those Merry Wives and gain access to their husbands’ money. Aug. 8-Sept. 1

INTO THE WOODS Joe Calarco directs the Stephen Sondheim-James Lapine musical about the intersecting stories of a childless baker, his wife, a witch, Cinderella, Rapunzel, Little Red Riding Hood, and Jack, that noted climber of beanstalks. Through July 13

GERTRUDE AND CLAUDIUS Mark St. Germain’s adaptation of John Updike’s novel, a prequel to “Hamlet’’ that tells the back story of Hamlet’s mother and uncle, the villains of Shakespeare’s drama. July 18-Aug. 3

HANSEL AND GRETEL Barrington Stage’s Youth Theatre tackles a fractured-fairytale musical adaptation of the familiar story in this family-friendly world premiere, which follows a band of actors as they present an “interactive, twisted version’’ of the tale. July 24-Aug. 10 DON AUCOIN

Don Aucoin can be reached at aucoin@globe.com. Follow him on Twitter@GlobeAucoin
Loading comments...
Most Popular in arts
Real journalists. Real journalism. Subscribe to The Boston Globe today.