I’d say “The Hate U Give” is the most important movie your teenagers will see this year, but that would be selling it short for yourself. So maybe go see it together. If they’ll have you.

“Important” isn’t necessarily the same as “good,” of course, so it’s a relief to report that this adaptation of Angie Thomas’s best-selling 2017 young-adult novel — about an African-American girl who sees her best friend gunned down by a policeman — escapes “Afterschool Special” clichés for the most part and works instead as one young woman’s powerful coming of age in the middle of a fractured society.

Mostly, though, the movie succeeds because of the actress at its center. Mainstream audiences know Amandla Stenberg as Rue in the film version of “The Hunger Games,” and your kids probably know her from her outspoken activism on social media and in interviews. If you saw her in last year’s bubble-girl romance “Everything, Everything,” you know Stenberg can play the Hollywood game with skill and conviction. With “The Hate U Give,” she emerges as one of the most appealing talents of her generation.

Her character, Starr, lives a life divided. In her close-knit and violence-plagued urban neighborhood, she’s Starr Version 1, easing into the vernacular and hopeful cynicism of working-class black life. At the mostly-white school she attends with her half-brother, Seven (Lamar Johnson), she’s Starr V. 2, with precise manners and speaking voice designed to keep her from standing out. Her white friends can call her “boo” and say “a’ight,“ but Starr knows when she uses slang, “it means I’m ‘hood.”

“The Hate U Give” starts with the gloves off: A wrenching flashback in which Starr’s father Mav (Russell Hornsby) makes his children memorize the exact steps to be taken when they’re pulled over by the police. Not if. When. Mav, who ran with gangs in his youth and now runs a corner grocery store, is majestic and hotheaded, blind to the subtleties seen by Starr’s medical technician mother, Lisa (Regina Hall). Or maybe she’s just overcautious and he has rightfully had enough. “The Hate U Give” invites you to chew it over. 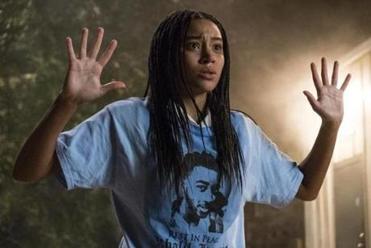 Commentary: ‘The Hate U Give’ is one of the most challenged books

“The Hate U Give” has been a New York Times bestseller for 82 weeks. It was also the eighth most questioned book of 2017. Here’s why.

It’s all academic until the night Starr leaves a neighborhood party with Khalil (Algee Smith), a childhood friend and a smart, caring kid with a knack for dumb decisions. As soon as the police-car lights come on, the audience braces for the worst, and director George Tillman Jr. (“Soul Food”) quickly and consciously puts us in mind of Walter Scott, Philando Castile, Sandra Bland, and other black Americans who have not survived their encounters with law enforcement.

It’s a sickening moment, not least because the officer (Drew Starkey) appears to be about 12 years old. And in the aftermath of the shooting, as the community builds toward outrage and protest similar to the events of 2014 Ferguson, Starr has to decide which version of herself she really is and to which community she fully belongs.

Can’t it be both? “The Hate U Give” offers tendrils of hope, alternately naïve and necessary. Because her identity as the sole witness to the killing has not been made public, Starr can listen as her schoolmates’ actual beliefs start popping into the open, the open-minded (her true-blue white boyfriend, played by K.J. Apa) as well as the unexpectedly racist (the callow best friend played by Sabrina Carpenter). In those scenes, and the one in which her uncle, a cop played by Common, talks about the view from his side of the badge, you can feel Audrey Wells’s screenplay strain to accommodate all the talking points, both worthy and wedged-in.

Similarly, a subplot in which Starr’s family is threatened by the local gang kingpin, who’s literally named King and who’s played with coiled menace by Anthony Mackie, feels pasted on top of the authentic emotions conjured up by the actors and the script. (Wells, who wrote and directed 1999’s “Guinevere” and the film version of “Under the Tuscan Sun,” died last week of cancer, at 58.)

At its frequent best, “The Hate U Give” dramatizes with care and awareness the infinite gray areas of black urban life in America. That King’s kids and Mav’s kids could grow up cheek by jowl as friends; that so few doors of opportunity are open, or even available, for a kid like Khalil, and it’s maybe not surprising that he reaches for the wrong one. That a girl of color finds it necessary to maintain a meticulous double life until events and a clear-sighted community activist (Issa Rae) force the two together. That such a double life is reality for many except those who have the luxury to not see it.

The movie’s title comes from Tupac Shakur’s mnemonic THUGLIFE, i.e., The Hate U Give Little Infants [Expletives] Everybody, and it’s a reminder that so much of what plagues society starts with what we tell and give our children. It’s fitting, then, that the real drama is in Starr herself as she is forced to grow up fast and find her voice while anger and resistance harden on both sides of the police line.

The most heartening aspect of the film, in fact, is watching the actress appear to physically and emotionally mature over the course of the drama. Starr starts as a hesitant girl and comes through the tear gas a grown woman, and Stenberg brings the audience with her every weary, insistent, inspiring step of the way.