So this is hell. That’s the thought that kept rumbling in the back of my mind as I made my way through the slapdash innards of “Happy Place,” a grotty, tacked-together funhouse tailored to the Instagram set.

Maybe you’ve heard of it: As it’s made its way from Los Angeles, Chicago, and Toronto, trailing hashtags all the way, the candy-colored “Happy Place” has drawn crowds to its set of a dozen or so selfie-ready installations — giant high heels, oversize red lips, a dome of fluttering confetti, and a pool of yellow balls beneath an inflatable rainbow, ripe for dunking. Touching down in Boston, it opens to the public on Friday in a former Marshalls at 500 Boylston St.

It’s all meant to max out your contentment meter, organizers say, and all those faces on Instagram surely look happy. So maybe it’s me. But I don’t think so. At one point during a preview visit, Madison Ciccone, a spin instructor in workout gear, played in a canary-yellow bathtub surrounded by rubber duckies while her personal photographer directed her through a series of postable moments: in profile, toe pointed; arms flung gleefully skyward; square to the camera, bright-white teeth flashed in a face-cracking grin.

“Can I get a slate?” she half-joked mid-performance, asking for another take. And performance is exactly what this was. It wasn’t about the experience; it was about framing the experience for her 36,200 Instagram followers with as much sunshine as she could muster. (Wednesday morning’s preview was for several dozen contest winners and a few well-placed social media influencers, of which Ciccone was one.)

Organizers might be pitching “Happy Place” as a mood-boosting pick-me-up and a refuge from the relentless dirge of the daily news cycle (founder Jared Paul told the Globe recently that “I really wanted to do something that was positive”), but there’s nothing about actually being in “Happy Place” that feels particularly happy, at least to me. 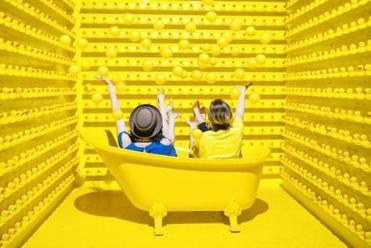 Happy Place, the ‘most Instagrammable pop-up in America,’ is coming to Boston

Happy Place, a pop-up exhibit known for being the perfect place to take selfies, will take up in the former Marshalls space in the Back Bay in April.

“Happy Place,” to me, is the embodiment of the 21st century at its most depressing, where real experiences matter less than how you can present them on screen. It bills itself as “the most Instagrammable place in America,” and that’s the problem: Whatever happens in real space and real time is just raw material for the virtual self-branding agenda that social media and its prettifying filters put at your fingertips.

And believe me, “Happy Place” needs those filters. Disneyland this is not: The entire thing has the cheap, artificial feel of a TV soundstage, thrown together for the camera — which, of course, it is. The optimistically named “glitter room” is a grid of plastic reflectors hung on hooks; next to it, white plastic chains dangle from the ceiling, surrounded by red walls.

“They really look a lot better in photos,” a press representative said, smiling weakly, as I stared blankly at the dollar-store aesthetic. As I watched, a young woman took a twirl amid the reflectors as her friend snapped a photo. She quickly grabbed his hand, steering his screen over for a look. “Amazing,” she said.

“Happy Place” isn’t trying particularly hard to look like much more than what it is: the temporary occupant of an abandoned department store.

Look up and you’ll see fiberglass insulation peeling back from the ductwork just outside the “Cookie Room,” where cookie wallpaper surrounds a giant cookie whose chocolate chips fold back so you can insert your face in the resulting void for a photo (the room will eventually be outfitted with a device that emits the scent of baking cookies, for an “immersive” experience). Look sideways in a corridor along which “Don’t Worry Be Happy” is suspended from the ceiling in glowing letters, and you’ll see slapped-together white siding thumbed with dirty fingerprints. Not that it matters. The camera doesn’t pick that up, and Instagram won’t see it. Because Instagram is always happy.

I was interested to hear Paul, in his opening remarks, thank the City of Boston for guiding “Happy Place” through the permitting process (everything came together in about a month, he said). I don’t know, but I’d guess City Hall saw #happyplace lighting up other cities and wanted to tag along.

The obvious issue aside — jumping on a pre-made bandwagon in hopes of sparking hashtags is as woeful a civic branding effort as I can imagine — there’s a bigger problem with “Happy Place” and its ilk.

As I walked along this stretch of Boylston, with nearby vacant storefronts presumably the casualties of a virtual economy that prizes simulation over real experience, “Happy Place,” with its bright yellow signage, looked to me like the sunny horseman of a looming digital apocalypse: a world of impermanence, pop-ups, and virtual space being prized over bricks-and-mortar city- and community-building, where our real lives are pale shadows of our filtered-and-enhanced onscreen selves. For some, “Happy Place” will be the perfect backdrop to help craft a virtually cheery life. Back here on the ground, it’s just a buzzkill — a reminder of how much we’ve already surrendered to the void.