As the years go by, I still love the Rolling Stones. Some of their records may not stand the test of time, but the crowning glory has always been to see them in concert — and that’s where my lifelong devotion lies.

My first taste was as a high school kid from the Boston suburbs catching them at Manning Bowl in Lynn in 1966 (a riot ensued), then as a college student at the famed 1969 Hyde Park show in London with 400,000 other folks, then in more modern times on their mega-sized “Steel Wheels,” “Voodoo Lounge,” and “Bridges to Babylon” tours, plus other dates since. If you love rock spectacles, they seem to set a new standard every time out.

I did miss their historic 1972 show at Boston Garden, when the Stones arrived post-midnight with a police escort after Mick Jagger and Keith Richards were charged with assaulting a photographer at T.F. Green Airport in Warwick, R.I. But — this is a laugh — I covered the aftermath of the airport scene when I was a cub reporter for the Warwick Beacon.

The Stones are coming to Gillette Stadium Sunday on their “No Filter” tour, but meanwhile, my memory bank is spilling over. Some of my favorite recollections personally and professionally (as a Globe music critic for 30 years) are of the Stones — their music, their antics, and their longevity, especially when you consider that their chief British Invasion rivals, the Beatles, stopped touring in 1966.

Incredibly, that was the year of the Manning Bowl show, where young, hormonally charged female fans rushed a flimsy stage and jumped up to grab Jagger before police shot off tear gas and the Stones scampered into limos and left. The show lasted only 20 minutes, but I was hooked for life. The Globe’s account the next day called it a “melee” and noted that “broken chairs littered the area.” I confess that in my frustration I had thrown one of them. 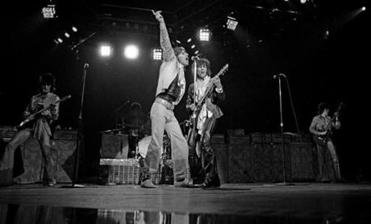 Photos: Rolling through the decades with the Stones

Tag along with former Globe photographer Ted Gartland on his 50-year love affair with the Rolling Stones.

Recalling that show years later in an interview, Jagger told me: “It was a bit of an outdoor crazy. It wasn’t well-secured. A few people got drunk. There were a few cops and that was the end of it.”

But Richards drew a blank. “Mate, I don’t even remember it. That sort of thing happened all of the time. Things got a little blurry in the ’60s.”

Seeing the Stones in Hyde Park in 1969 was a more trippy experience. They were massive stars by then, and it seemed as if half of London had turned out for the free concert, which occurred only two days after former Stones guitarist Brian Jones had been found dead in his swimming pool. I was mesmerized when Jagger started the show by releasing hundreds of white butterflies into the air in tribute to Jones. Security was provided by the British Hells Angels in exchange for cups of tea. (Sadly, we all know what happened a few months later at the Altamont festival in California, when Hells Angels working in exchange for beer killed a concertgoer during the Stones’ set — and wiped out the Woodstock myth.)

Flash forward to 1980: I’m working at the Globe and score my first interviews with Mick and Keith (separately) at Rolling Stones Records in New York. Jagger lit up a joint and paced the room, but he was pleased when I said I was just there to ask about his music — the Stones were about to release their “Emotional Rescue” album — and not about his sex life, which was in the news at the time.

I told him I was sometimes obsessed with their albums (my favorite was always “Aftermath”), but he shocked me by saying he didn’t like to play them himself.

“Once they’re done, they’re in the past. That’s it,” he said. “I play the songs onstage, but when you play them onstage you can do them differently. But the records I never want to hear again. A lot of people are like that, though there are people who aren’t. God, you go around to their apartments and all they do is play their own records and say, ‘Yeah, this is one I made years ago. It’s a bit obscure. It never really got played.’ Jesus, they’re a nightmare!”

Afterward, I moved on to the more easy-breezy Keith in another office. He wanted to reminisce about the Stones’ roots when they were poor. He said they used to go to every party they could and collect bottles and redeem them to pay for guitar strings and amp repairs.

Highlighting his point, he added, “We wanted to put together a band that would pay for itself just enough to be able to play South Side Chicago blues without having to steal from supermarkets.” The Stones stealing from supermarkets?

“Yes, but I can’t tell you their names, because one is still around, I believe.” That’s Keith in a nutshell. He remembers when the Stones were nobodies; it’s in his DNA.

The Stones rehearsed for their 1981 tour at Long View Farm in North Brookfield, near Worcester. They holed up in a barn-turned-studio, but despite my hanging around there for a couple of days looking for a story, I couldn’t gain access. Nor could I get in to their “sneak” show under the fake name of the Cockroaches at tiny Sir Morgan’s Cove in Worcester. The media was barred.

They never played Boston that year (they wanted to play the Orpheum but city authorities thwarted it), so I had to trek to the Hartford Civic Center to see them. It was not their best show — they had a big white floor with winding ramps where the Stones would end up being remote figures 20 feet from each other. It just didn’t work, though it was exciting when Jagger hopped on a crane and was hoisted over the crowd to sing “Jumpin’ Jack Flash.”

Personality conflicts (and solo albums) kept them off the road for eight years before they returned with the colossal “Steel Wheels” tour in 1989. I caught the opener in Philadelphia when Jagger belted out a rare Stones nugget, “Dead Flowers,” and chuckled, “I don’t even remember what album this song is from!” The crowd roared.

When they got to Sullivan Stadium in Foxborough, they were clicking on all cylinders. They played the first three-night engagement ever there, attracting 165,000 fans and grossing a reported $4.8 million. They opened with a crunching trio of “Start Me Up,” “Bitch,” and “Shattered,” and later during “Honky Tonk Women” unveiled 55-foot-high inflatables of two high-heeled women with cigarettes dangling in their fingers — the Stones at their juvenile best.

The “Voodoo Lounge” tour of 1994 was another monster spectacle. The Stones needed 43 trucks to transport the staging, and a crew of 250 people spent four 12-hour days installing it. The props featured a 42-foot-high Sony Jumbotron screen and arched, cobra-shaped steel girders that were 92 feet high. Oh, and a 70-foot-high inflatable of Elvis Presley to spice up the night. I caught the opening date at RFK Stadium in Washington before it hit Foxborough. Both were great shows. One highlight of the tour was the band departing from its normally rigid setlist to play three or four different songs each show, at Keith’s request. He wanted to keep it fresh, and he succeeded.

Up next was 1997’s “Bridges to Babylon” tour (dubbed “the Metamucil Tour” by David Letterman). The show was flat-out enthralling — their Foxborough set ranged from the Vietnam-era protest song “Gimme Shelter” to their garage-punk classic, “Star Star,” played for only the second time on the tour. Before the show, I caught up to Keith and drummer Charlie Watts, and Keith gushed, “I’ve never heard Charlie play better.” To which the modest Watts replied, “Oh, Keith always says that.”

It was a treat to then see them return to arenas and land at the FleetCenter (now TD Garden) in 1999, the highlight being Mick blasting through “Midnight Rambler” on a B stage in the middle of the crowd. It was also fun to see a more stripped-down show (there weren’t even any inflatables during “Honky Tonk Women”).

Their 2002 tour saw them book multiple Boston venues — the FleetCenter, Gillette, and the Orpheum. The latter was the toughest ticket in the world to get, but the show was a bit of a disappointment. It was brutally hot in the non-air-conditioned Orpheum, and huge fans were set up behind the stage to cool the band. The show featured “Parachute Woman,” played for the first time since 1968, and Buddy Guy joined the band for B.B. King’s “Rock Me Baby,” but the Sahara-like atmosphere seemed to slow everyone down a notch.

My memory bank then moves to a 2005 show at Fenway Park — a fantastic soiree highlighted by a Ray Charles tribute on “Night Time is the Right Time,” with photos of Charles beamed on a 60-foot video screen. And I caught them at the Garden again in 2013 when they ripped it up with “Paint It, Black” and were even joined by former Stones guitarist Mick Taylor on “Sway.” A nice gesture.

So how much longer can the Stones continue?

Why ask? Just enjoy. It’s been 53 years since the Beatles got off the road, but the Stones are still going. They’re defying age, gravity, and common sense, but they’re still rocking.

Steve Morse can be reached at spmorse@gmail.com
Loading comments...
Most Popular in arts
Real journalists. Real journalism. Subscribe to The Boston Globe today.