VENICE — It all begins with Adel Abdessemed’s flower bursts of machetes sticking out of the ground. Ironically titled “Nympheas,” after Claude Monet’s great waterlily series, they’re in the same big opening room as Bruce Nauman’s neon signs flashing “WAR” and “RAW,” “EAT” and “DEATH,” and — in a work called “American Violence” — “STICK IT IN YOUR EAR,” “SIT ON MY FACE,” and “RUB IT ON YOUR CHEST.”

We’re in the Arsenale, for centuries the locus of Venice’s immense naval power, and now the main venue for one half of the enormous group show at the heart of the Venice Biennale, the world’s most prestigious showcase for contemporary art. Apart from Nauman’s lurid neon, there’s no color in this first part of the show — certainly no soft Impressionist daubs. Only hard, implacable stuff, suggestions of unyielding machinery, rumbling violence. At the heart of the display is a gauntlet of two rows of small-scale, medallion-like sculptures by the great African-American sculptor Melvin Edwards. They weld together manacles, axes, and chains. They’re brilliant.

There are also weapons. Lots of weapons. Walking on though the Arsenale, we confront clusters of chainsaws hanging threateningly from the ceiling (Italy’s Monica Bonvicini), a giant cannon (made in 1965 from wood and scrap metal, by Pino Pascali), and an abandoned backpack twitching on the floor. Also, a knife implanted in a desk, bullets tearing through ballistics gel, and thrones made from decommissioned assault rifles.

Titled “All the World’s Futures,” this year’s show — the most closely watched part of a vast archipelago of exhibitions scattered throughout Venice — was organized by Okwui Enwezor, a veteran of the international curator circuit, born in Nigeria and long based in Europe.

Along with violence, Enwezor’s main themes are labor, inequality, and the possibilities of political transformation (and consequences — not all of them good). He has focused on artists from diasporas, and has openly revealed his sentimental feelings about Karl Marx: Live readings from Marx’s “Das Kapital” will take place each day in the show’s other main space, the International Pavilion. 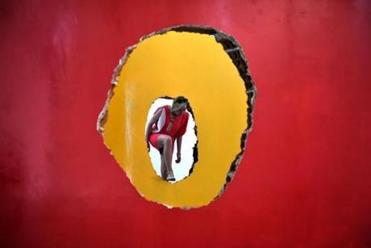 The prestigious Venice Biennale kicks off this weekend, exhibiting contemporary artists from 89 countries around the world for the 56th year.

I have a feeling Enwezor’s effort here will be remembered well. It’s unapologetically political, often confronting, and too big, but it’s brilliantly braided together and has a powerful cumulative effect. There’s much about it to regret — above all, Enwezor’s weakness for pretentious academic gestures dressed up as meaningful politics, and the preponderance of very long videos and even longer performances. (What Enwezor calls “epic duration” — curator-speak for an unrelenting concatenation of videos and performances filling up more time than anyone could possibly devote to them — risks becoming epic punishment.)

But if Enwezor’s deliberate emphasis on time-consuming work becomes absurd, his show nonetheless contains plenty of brilliant individual works, as well as loads of smart pairings and suggestive correspondences. The star of the show may be Mika Rottenberg, a young Israeli video artist based in New York. Her work, seen at the Rose Art Museum at Brandeis University last year, appears in both halves of “All the World’s Futures.”

In this sense she’s the opposite of artists who may have deep political convictions, but lack the ability to turn them into real art. (Real art? It quickens your pulse, and sticks around in your head.)

Enwezor insists in the catalog that he is interested above all in the “state of things.” And most of the best work in the show does indeed feel very present-tense. None is more successful in this sense than Chantal Akerman’s multi-screen film installation, “Now,” which conjures from very little a state of life-threatening emergency.

A phalanx of screens all show a rocky desert landscape as seen from a car traveling at high speed. The soundtrack makes it clear that we are in a war zone — and rushing to get away. We hear sporadic gunfire, a siren, various animals in states of alarm, and a curtailed cry of pain or fear. We could be outside Tikrit or Kabul, it scarcely matters. Everything is happening fast, fast. Your body shifts into high alert.

But we know nothing more, and as in many of Akerman’s films, it’s what we don’t see and can’t know that makes the experience so credible, so strong. Other films, mostly short — including Christian Boltanski’s footage of a man coughing blood, Raha Raissnia’s flickering images of destitute men, John Akomfrah’s footage of nature in tumult, and Theaster Gates’s film of African-Americans performing inside a dilapidated church to the mournful sound of the blues — are similarly blunt.

Yet at the same time, they’re poetic, full of yearning and confusion, and they provide welcome antidotes to the show’s more didactic or academically convoluted works.

If soft colors and beautiful flowers are in short supply at the beginning of the Arsenale show, they come into play elsewhere, mostly in lush paintings by black artists such as America’s Kerry James Marshall, Britain’s Chris Ofili, and Australia’s Emily Kngwarreye, the late-flowering aboriginal painter whose work in her home country is often compared with late Monet.

Color arrives too in the lurid hues of Katherina Grosse’s spray-painted mounds, Georg Baselitz’s quartet of massive, upside-down figures in thick, gestural paint, and the bright collage portraits of Kay Hassan. But providing a counterpoint to so much vivacity are powerful text-based paintings by Glenn Ligon and Newell Harry, and a new suite of figurative paintings in shades of black by Lorna Simpson.

All these paintings, along with a superb suite of skull paintings by South Africa’s Marlene Dumas, have a political charge. But as mostly large-scale paintings, they have an imperiousness, a detached air, that stands in contrast to the many examples of more private, small-scale, and provisional-looking work made in the medium of drawing — often with words attached.

I liked this vein of the show greatly, and found myself developing crushes on artists like China’s Qiu Zhijie, who has superimposed absurdist, poker-faced captions on a giant scroll painting, and Russia’s Olga Chernysheva, who has added similarly droll but somehow more poignant captions to her own humdrum drawings.

I also liked Nidhal Chamekh’s small-scale drawings of toppled political monuments, from the Vendome column, celebrating Napoleon’s victory at Austerlitz, brought down by Gustave Courbet during the Paris Commune, to the notorious toppled statue of Saddam Hussein in Iraq.

Drawing and text come together in other interesting forms, too — including in the piles of desk graffiti made by hundreds of children around the world, collected by Colombia’s Oscar Murillo; in the work of the Nigerian comic-style artist Karo Akpokiere; and in the elaborate drawings of fantasy war machines (weapons again!) by Sierra Leone’s Abu Bakarr Mansaray.

Some work is old, some is new. A number of artist intellectuals and agitators, who seem to have been disinterred from earlier eras, appear in Enwezor’s show, and it’s nicer to see some than others. Hans Haacke’s institutional critiques in the forms of surveys of the political opinions and socioeconomic status of exhibition visitors feel pertinent in some ways, dismally patronizing in others.

Similar feelings accompany Enwezor’s inclusion of installations (by Marco Fusinato) or performance-based works (by Rirkrit Tiravanija) that ask for donations that will go to various causes.

But with their intellectual restlessness, their gravitas, and their visual flair, the late Robert Smithson and the late Chris Marker are both welcome presences. There are many works here reflecting on the cruelty and boredom of repetitive, poorly paid labor — although none do it as brilliantly as Rottenberg (who anyway goes for something deeper, as real artists do). Japan’s Tetsuya Ishida has a set of tightly controlled figurative paintings that depict Japanese workers with robotic arms and sorry fates, while South Korea’s Im Heung-Soon has a documentary-style video that savagely indicts Samsung for asking its employees to endure what one worker calls a “living hell.”

All in all, it’s a show that feels well matched to our tumultuous times, and to our various shared but unevenly distributed troubles. It is complemented not only by scads of performance art and many outdoor sculptures — there is an exquisite display by Sarah Sze, the former US Pavilion representative, in the gardens at the end of the Arsenale — but also, of course, by dozens of national pavilions. The most established of these are in the Giardini, a short walk from the Arsenale.

The Giardini pavilions were mostly underwhelming this year. But my vote for the best goes to Poland, which presents a film, recorded in wide-angle and projected on a long, curving screen, by Joanna Malinowska and C. T. Jasper. Inspired by the quixotic questing in Werner Herzog’s “Fitzcarraldo,” it shows the live performance of a Polish opera in a Haitian village street before a crowd that includes descendants — follow closely now! — of the Polish troops that Napoleon sent to San Domingo to fight the rebellion of black slaves.

Those Poles wanted their own national independence, which is why they joined Napoleon. But in Haiti they decided to help the black insurgents, and some stayed on in that country. No need to say more — it’s an incredible story, and the film is smart, funny, and surprisingly moving.

There’s even more to the Venice Biennale than all this. The city’s museums and palazzos are filled with exhibitions — and its churches, of course, are filled with Titians, Bellinis, Tintorettos, and Carpaccios. If you love art, it’s a paradise. But even here, the waters are rising, and the “state of things” keeps rolling in.

At: Venice, through Nov. 22. www.labiennale.org

Sebastian Smee can be reached at [email protected].

Correction: An earlier version included an incorrect reference to the artist Gedi Sibony.