VENICE — It’s the biggest stage for contemporary art in the world: Collectors, dealers, curators, museum directors, and art lovers of every stripe have descended on Venice every two years for more than a century for the Venice Biennale. This year, the artist representing the United States at its national pavilion in the Giardini, south of St. Mark’s Square, is Joan Jonas: an undersung pioneer of video and performance art, and a professor emerita at the Massachusetts Institute of Technology.

MIT’s List Visual Arts Center, under the leadership of director Paul Ha, is the commissioning institution for the US Pavilion at the Biennale; Ha co-curated the show with Ute Meta Bauer. It’s the third time in the past 15 years the List has been chosen to organize America’s representation in Venice: a testament to the small Cambridge gallery’s outsized influence.

Paradoxically, although it presents new work made in the past few months, Jonas’s show has a slightly old-fashioned aura. Her once avant-garde aesthetic matured in the 1970s, and in some ways Jonas, 78, never seems to have left that decade. Video and performance art, which both are ubiquitous at this year’s Biennale, have now morphed beyond recognition.

But Jonas’s Venice show, support for which was provided by Cynthia and John Reed, the US Department of State, and the Helen Frankenthaler Foundation, grows on you. It combines video projections with voiceovers, drawings, and installation. Initially, it seems made up of too many disparate parts. But as you move through it, the parts come together gradually, and the whole casts a quiet but powerful spell.

Jonas has colonized all five galleries of the US Pavilion, a 1930 Palladian building designed by William Adams Delano and Chester Holmes Aldrich, situated in the Giardini Publici, or Public Gardens. Like the US pavilion at Expo Milano 2015, a separate show that just opened three hours away in Milan, the Venice exhibition site is surrounded by a slew of other national pavilions in various architectural styles. 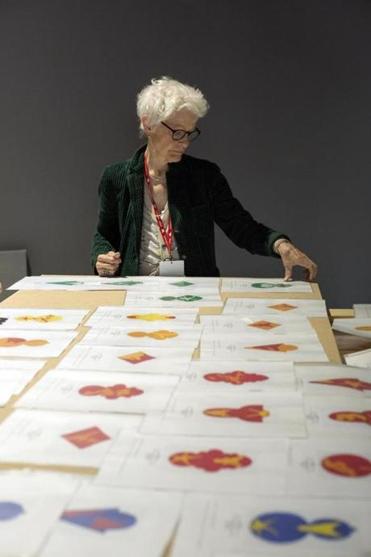 Ghosts, bees, and a pioneering artist at Venice Biennale

Joan Jonas unveiled an ambitious multimedia installation to the public as the US representative at the Venice Biennale.

But at Expo Milano, which purports to be all about the future of food on our planet, all the pavilions are ostentatiously, brand-spanking new, expressing a sort of rictus-smile optimism about the world. They’ve been purpose-built for the event, which is held in a 3.6 million square foot sustainable “smart city” on the outskirts of Milan.

The setting in Venice is smaller, more genteel, and inevitably – not unlike Jonas’s own work – anachronistic, in a way, that feels apt.

Jonas makes us forget the idea of national identity as soon as we enter. Her overall theme is the beauty and fragility of the natural world.

She seems especially intrigued by the strange persistence of the things we have lost. With that in mind, she uses fragments of ghost stories sourced from an oral tradition in Cape Breton, Nova Scotia, as voiceovers to her video projections.

“Ghosts are very much alive there, as in all parts of the world,” she has said. “We are haunted, the rooms are haunted.”

Jonas’s work has itself long been haunted by literature, and of late she has responded particularly to the writings of Halldor Laxness, the Icelandic author whose feeling for nature is often described as poetic. “They Come To Us Without a Word,” Jonas’s Venice show, grew out of an earlier, Laxness-inspired work, “Reanimation,” first presented at MIT in 2010.

Each of the pavilion’s four main rooms includes two screens suspended from the ceilings. The surrounding walls are covered with drawings. Various other objects appear, including masks, brightly colored kites, sticks, mirrors, and a chandelier.

At first, the effect of all this is a little dismaying. Jonas obtained much of the video footage from workshops she conducted with schoolchildren in New York this past winter. Charming as it is, some of it conjures the awkwardness of junior-school theater.

In the first room, which is themed around bees, the children move about in front of a screen onto which bee-related imagery is projected. They wiggle and circle, unconvincingly mimicking the actions of the bees in the projection.

The children reappear in each of the succeeding galleries, each of which has a different theme: “fish,” “wind,” and so on. Their presence is set against voices telling ghost stories, by increasingly powerful music (from the jazz pianist-composer Jason Moran and the Norwegian Sami singer Ande Somby), and by imagery that gets more and more arresting, spooky, and seductive.

In fact, the children eventually come to anchor the work, lending the entire installation a kind of disarming innocence or purity.

Children listen to ghost stories. There is something ritualistic and magical about their games. Like animals, which also play a big part here, children pick up on currents that adults rarely notice. The things they connect with instinctively are often the things we adults have lost.

These are the simple notions I take Jonas to be getting at in her work, which will be complemented by three live performances in July. Despite the literary references and the obscure, at times pretentious presentation, there is something tremendously open-hearted about the result.

A final note: Just days before the Biennale’s preview week kicked off on Tuesday, the MIT-led US delegation to Venice was rocked by the news that Jane Farver, the List’s much-admired former director, had passed away suddenly.

Farver had come to Venice to help the team and edit the catalog. She had led the List’s presentation of Fred Wilson at the 2003 Venice Biennale, so her presence and experience were tremendously steadying. Farver was a brilliant curator, and one of the nicest people I have met in Boston’s museum world.