MARSHFIELD — The manhunt for a gunman accused of killing his estranged wife on Main Street Monday night ended peacefully in nearby Whitman Tuesday afternoon, after the suspect commandeered a flatbed truck and crashed it at a Dunkin’ Donuts.

Allen Warner, 47, is charged with murder and is scheduled to be arraigned Wednesday in Plymouth District Court. Authorities allege he shot Shana Warner, 48, shortly after she called 911 Monday evening and told police she was being pursued in Marshfield.

The shooting prompted tense warnings from police, who advised Marshfield residents to stay indoors while the suspect, considered armed and dangerous, remained at large.

Earlier in the day, police were summoned to investigate a report of a vehicle striking equipment in the drive-through of the Dunkin’ Donuts on South Avenue in Whitman and then fleeing, Cruz said. 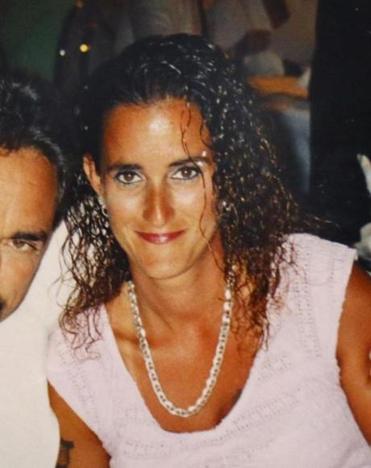 The death of Shana Warner, allegedly at the hands of her estranged husband, was the 13th time this year that someone lost their life to an intimate partner in Massachusetts.

Surveillance video of the incident revealed that the vehicle belonged to T&K Asphalt Services, Cruz said. An employee at the paving company told Whitman police Officer Mark Poirier that the truck in question shouldn’t have been on the road.

While Poirier was at the paving company investigating, he saw the missing truck drive by with Warner behind the wheel, Cruz said. Poirier stopped the vehicle, and Warner surrendered.

Police launched the manhunt after finding a car driven by Shana Warner in a ditch along the 700 block of Main Street in Marshfield, which is part of Route 3A, on Monday evening.

She was rushed to South Shore Hospital in Weymouth, where she died less than an hour later, Cruz said. An autopsy was being conducted Tuesday to determine the cause of death. She suffered other life-threatening injuries in addition to being shot, he said.

Before Allen Warner was taken into custody, the slain woman’s grandfather said in a telephone interview that she was determined to end her abusive marriage.

“She just couldn’t finally take his baloney any more,’’ said Arthur P. Michalski, 81. “He was a guy who never appreciated what she did for him or helped him. He was abusive.”

Court records show the couple married in February 2008 at a wedding chapel on the Las Vegas strip. But by the end of 2010, Shana Warner wrote in court papers, her husband had become physically and verbally abusive “due to his drug use.”

She filed for divorce in June 2011 and again in February 2017, court records show. Both cases were dismissed at Shana Warner’s request.

She filed for divorce a third time in May. A hearing date in that case was scheduled for January.

Her father, Thomas DeFilippo, fought back tears Tuesday as he spoke about his daughter. She had finally found happiness with another man, whom she planned to marry, he said.

DeFilippo said he last saw his daughter on Monday at 5:40 p.m. — about 11 minutes before authorities say Allen Warner attacked her. When DeFilippo heard news of the shooting, shortly after it happened, he sent a text to his daughter, telling her to be careful. He had no idea that she was the victim.

“I’m just going to miss her so much,” said DeFilippo, declining to talk further.

Her mother, Maureen, said she went to the hospital to identify her daughter’s body.

“It was horrible, horrible,” she said.

During a news conference before Allen Warner was arrested, Marshfield police Chief Phillip A. Tavares said that police believe the suspect recently came to Marshfield looking for his estranged wife.

“He had been skulking around the area days before this, in attempts to locate her,” he said.

During a heavy rainfall five days ago, Tavares said, a 911 caller noticed a man walking down School Street, where the victim’s parents live. The caller — who was not Shana Warner or any of her relatives, Tavares said — alerted police about a “suspicious person.”

“He said he was picking up cans,’’ Tavares said, adding that the officers left without taking further action because “he wasn’t involved in criminal activity at that time.”

Cruz said Tuesday there was no active restraining order against Warner.

According to Michalski, Shana Warner had three adult children, but none with Allen Warner. He said that Shana Warner told him years ago that Allen Warner owned a rifle, but also said he did not have any ammunition for it.

“I was waiting for him to come to my house [Monday] night,’’ Michalski said. “I would have shot him.”

Michalski said the couple had often visited his home. He said that Allen Warner was hit by a car in Rockland some time ago, and suffered serious leg injuries that required several surgeries and an extended recovery.

Warner started using opioids and became addicted to them, leaving him unemployed and collecting Social Security disability benefits, Michalski said. His granddaughter said she tried to help him, Michalski said, to no avail.

The search for Warner drew federal, state, and local police to the woods near the spot where his wife’s car was found on Main Street.

Witnesses saw him climbing up the bank and away from the victim’s car.

On Tuesday, police tape was still strung between a telephone pole and a stop sign, where Old Main Street Extension splits from Main Street. At the foot of the stop sign, someone had placed a bouquet of red roses.