FBI Director James Comey should have been fired for his blatant mishandling of the investigation into Hillary Clinton’s use of a private e-mail server. But President Trump, whose campaign aides are currently being investigated by Comey’s law enforcement agency, is most certainly not the man who should have pushed him out the door.

In doing so, Trump has engaged in what may be the worst abuse of presidential power since the Saturday Night Massacre at the height of the Watergate scandal in 1973. His actions should lead to the immediate appointment of an independent counsel to investigate his political and business ties to Russia. But that would mean congressional Republicans putting country ahead of party — and I’m not holding my breath.

If you buy the argument made by the White House and the Department of Justice that Comey’s firing was a direct result of his actions in the Clinton e-mail case, then I’m making much ado about nothing. But if you do believe that line of reasoning, I’d also suggest that the next time you head to Fenway Park keep an eye out for me as the Red Sox’s new starting second baseman.

If, however, you still live in a world where facts — and things that presidential candidates once said — still matter, you know better. After all, Trump pledged to throw Hillary Clinton in jail over her faux e-mail scandal and just last week tweeted out that Comey is “the best thing that ever happened to Hillary Clinton,” because he gave her “a free pass for many bad deeds.”

FBI Director Comey was the best thing that ever happened to Hillary Clinton in that he gave her a free pass for many bad deeds! The phony...

That Trump is now firing Comey on the grounds that he mistreated Clinton is the most compelling evidence that Trump and his aides think we’re all a bunch of idiots. 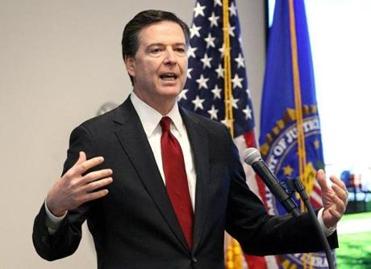 Will Congress step up after Comey firing?

After President Trump’s bombshell announcement, the nation is at a crossroads.

Indeed, the probable real reason for Comey’s firing is not hard to discern — the ongoing FBI investigation into Trump’s Russia links that has ensnared Trump’s top campaign aides, his former national security adviser, and possibly the president himself. Trump has now rid himself of the man heading that investigation. Depending on who succeeds Comey, he may also have laid the groundwork for ending the inquiry altogether.

Trump’s letter to Comey informing him of his dismissal speaks volumes on this point. “While I greatly appreciate you informing me, on three separate occasions, that I am not under investigation,” wrote Trump, “I nevertheless concur with the judgment of the Department of Justice that you are not able to effectively lead the bureau.”

That the president so openly references the Russia investigation leaves little doubt as to what was on Trump’s mind when he decided to fire Comey.

But there is also common sense. If Comey had treated Clinton so badly, why did Trump and Attorney General Jeff Sessions both praise Comey for reopening the investigation into Clinton e-mails in late October? Why didn’t he fire Comey after taking office? Why wait more than three months when the reasons cited by the Department of Justice date back to 2016? Does it have anything to do with the fact that Comey made clear in congressional testimony earlier this year that Trump and his aides were in the FBI’s crosshairs? Or perhaps it has something to do with the recent issuing of grand jury subpoenas tied to the investigation into former national security adviser Mike Flynn. With Republicans obstructing a congressional investigation into Trump’s Russia ties, Comey represented the most direct political and legal threat to the White House. Now he’s gone.

But now Trump has squarely put congressional Republicans on the spot. Letting Trump’s actions stand — and further obstructing an independent investigation into the president’s Russia ties — is to make clear that the party simply doesn’t care about the rule of law and democratic accountability. It will send an unambiguous signal that they have little interest in holding in check a semi-authoritarian leader if it puts their own jobs in political peril.

This may sound like hyperbole, but it’s not. Even if Trump truly did fire Comey over his handling of Clinton’s e-mail investigation, the obvious appearance of a conflict of interest in doing so undermines basic democratic norms. Quite simply, you don’t fire the head of the FBI when the FBI is investigating you.

If Trump fired Comey because he was acting impulsively or was jealous of Comey’s media attention, then it suggests Trump is not fit to be president.

But if Trump pushed Comey out because he wanted to put an end to the FBI’s Russia investigation, that means he has brazenly obstructed justice and committed an impeachable offense. Whatever the case, a functioning democracy demands answers.

This is the Republican Party’s moment of truth. Will they be patriots or partisans? Will they stand up or stand aside as Trump’s daily assaults on the rule of law and once sacrosanct political norms further erode the very foundation of our democratic system?

I know what I hope the answer is. But I have little confidence that Republicans will do the right thing — and even less confidence that American democracy can survive Donald Trump if they do nothing.